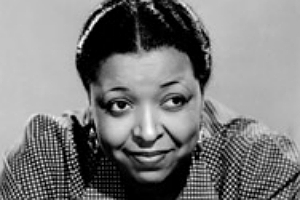 Ethel Waters (October 31, 1896 – September 1, 1977) was an African-American blues, jazz and gospel vocalist and actress. She frequently performed jazz, big band, and pop music, on the Broadway stage and in concerts, although she began her career in the 1920s singing blues.

Her best-known recordings include "Dinah," "Stormy Weather," "Taking a Chance on Love," "Heat Wave," "Supper Time," "Am I Blue?" and "Cabin in the Sky," as well as her version of the spiritual "His Eye Is on the Sparrow." Waters was the second African American, after Hattie McDaniel, to be nominated for an Academy Award. She is also the first African American woman to be nominated for an Emmy Award, in 1962.

Ethel Waters was born in Chester, Pennsylvania, on October 31, 1896, as a result of the rape of her teenaged mother, Louise Anderson (believed to have been thirteen years old at the time, although some sources indicate she may have been slightly older), by John Waters, a pianist and family acquaintance from a mixed-race middle-class background. Waters played no role in raising Ethel. Ethel Waters was raised in poverty and never lived in the same place for more than 15 months. She said of her difficult childhood, "I never was a child. I never was cuddled, or liked, or understood by my family."

Waters grew tall, standing 5'9½" in her teens. According to women-in-jazz historian and archivist Rosetta Reitz, Waters' birth in the North and her peripatetic life exposed her to many cultures.

Waters married at the age of 13, but soon left her abusive husband and became a maid in a Philadelphia hotel working for $4.75 per week. On her 17th birthday, she attended a costume party at a nightclub on Juniper Street. She was persuaded to sing two songs, and impressed the audience so much that she was offered professional work at the Lincoln Theatre in Baltimore, MD. She later recalled that she earned the rich sum of ten dollars a week, but her managers cheated her out of the tips her admirers threw on the stage.

After her start in Baltimore, Waters toured on the black vaudeville circuit. As she described it later, "I used to work from nine until unconscious." Despite her early success, she fell on hard times and joined a carnival, traveling in freight cars along the carnival circuit and eventually reaching Chicago. Waters enjoyed her time with the carnival and recalled, "the roustabouts and the concessionaires were the kind of people I'd grown up with, rough, tough, full of larceny towards strangers, but sentimental and loyal to their friends and co-workers." She did not last long with them, though, and soon headed south to Atlanta, where she worked in the same club with Bessie Smith. Smith demanded that Waters not compete in singing blues opposite her. Waters conceded and sang ballads and popular songs. Around 1919, Waters moved to Harlem and there became a celebrity performer in the Harlem Renaissance during the 1920s.

Waters obtained her first Harlem job at Edmond's Cellar, a club that had a black patronage. She specialized in popular ballads and became an actress in a blackface comedy called Hello 1919. Jazz historian Rosetta Reitz points out that by the time Waters returned to Harlem in 1921, women blues singers were among the most powerful entertainers in the country. In 1921, Waters became the fifth black woman to make a record, on the tiny Cardinal Records label. She later joined Black Swan Records, where Fletcher Henderson was her accompanist. Waters later commented that Henderson tended to perform in a more classical style than she would prefer, often lacking "the damn-it-to-hell bass."

She recorded with Black Swan from 1921 through 1923. In early 1924, Paramount bought the Black Swan label, and she stayed with Paramount through that year. Waters first recorded for Columbia Records in 1925, achieving a hit with her voicing of "Dinah", which was voted a Grammy Hall of Fame Award in 1998. Soon after, she started working with Pearl Wright, and together they toured in the South. In 1924, Waters played at the Plantation Club on Broadway. She also toured with the Black Swan Dance Masters. With Earl Dancer, she joined what was called the "white time" Keith Vaudeville Circuit, a traditional white-audience based vaudeville circuit combined with screenings of silent movies. They received rave reviews in Chicago and earned the unheard of salary of US$1,250 in 1928. In 1929, Waters and Pearl Wright arranged the unreleased Harry Akst song "Am I Blue?," which then appeared in the movie On with the Show and became a hit and her signature tune.

Although she was considered a blues singer during the pre-1925 period, Waters belonged to the vaudeville style of Mamie Smith, Viola McCoy, and Lucille Hegamin. While with Columbia, she introduced many popular standards including "Dinah," "Heebie Jeebies," "Sweet Georgia Brown," "Someday, Sweetheart," "Am I Blue?" and "(What Did I Do To Be So) Black and Blue" on the popular series, while she continued to sing blues (like "West End Blues," "Organ Grinder Blues," etc.) on Columbia's 14000 race series. During the 1920s, Waters performed and was recorded with the ensembles of Will Marion Cook and Lovie Austin. As her career continued, she evolved toward being a blues and Broadway singer, performing with artists such as Duke Ellington. She remained with Columbia through 1931. She then signed with Brunswick in 1932 and remained until 1933 when she went back to Columbia. She signed with Decca in late 1934 for only two sessions, as well as a single session in early 1938. She recorded for the specialty label "Liberty Music Shops" in 1935 and again in 1940. Between 1938 and 1939, she recorded for Bluebird.

In 1933, Waters made a satirical all-black film entitled Rufus Jones for President, which featured then-child performer Sammy Davis Jr. as Rufus Jones. She went on to star at the Cotton Club, where, according to her autobiography, she "sang 'Stormy Weather' from the depths of the private hell in which I was being crushed and suffocated." She had a featured role in the wildly successful Irving Berlin Broadway musical revue As Thousands Cheer in 1933, where she was the first black woman in an otherwise white show. She had three gigs at this point; in addition to the show, she starred in a national radio program and continued to work in nightclubs. She was the highest paid performer on Broadway at that time. MGM hired Lena Horne as the ingenue in the all-Black musical Cabin in the Sky, and Waters starred as Petunia in 1942, reprising her stage role of 1940. The film, directed by Vincente Minnelli, was a success.

She began to work with Fletcher Henderson again in the late 1940s. She was nominated for a Best Supporting Actress Academy Award in 1949 for the film Pinky, under the direction of Elia Kazan, after original director, John Ford, quit, due to his disagreements with Waters. According to producer Daryl Zanuck, Ford "hated that old...woman (Waters)." Ford, Karzan stated, "Didn't know how to reach Ethel Waters." Kazan later referred to Water's "Truly odd combination of old-time religiosity and free-flowing hatred.". In 1950, she won the New York Drama Critics Circle Award for her performance opposite Julie Harris in the play The Member of the Wedding. Waters and Harris repeated their roles in the 1952 film version of Member of the Wedding'' In 1950, Waters starred in the television series Beulah, but quit after complaining that the scripts' portrayal of blacks was "degrading." She later guest starred in 1957 and 1959 on NBC's The Ford Show, Starring Tennessee Ernie Ford. In the 1957 episode, she sang "Cabin in the Sky."

Despite these successes, her brilliant career was fading. She lost tens of thousands in jewelry and cash in a robbery, and had difficulties with the IRS. Her health suffered, and she worked only sporadically in following years. In 1950-51 she wrote the autobiography His Eye is on the Sparrow with Charles Samuels, in which she wrote candidly about her life. She explains why her age has often been misstated: her mother had had to sign a paper claiming Waters was four years older than she was, and that she was born in 1896. His Eye is on the Sparrow was adapted for a stage production in which she was portrayed by Ernestine Jackson. In her second autobiography, To Me, It's Wonderful, Waters states that she was born in 1900. Rosetta Reitz called Waters "a natural ...  songs are enriching, nourishing. You will want to play them over and over again, idling in their warmth and swing. Though many of them are more than 50 years old, the music and the feeling are still there."

Waters is the great-aunt of singer-songwriter Crystal Waters. Waters often toured with Billy Graham on his crusades. She died on September 1, 1977, aged 80, from uterine cancer, kidney failure, and other ailments in Chatsworth, California.