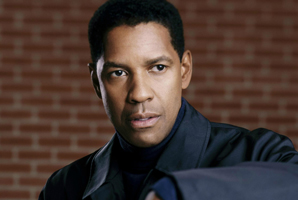 Denzel Hayes Washington, Jr. (born December 28, 1954) is an American actor, film director, and film producer. He has received much critical acclaim for his work in film since the 1990s, including for his portrayals of real-life figures such as Steve Biko, Malcolm X, Rubin "Hurricane" Carter, Melvin B. Tolson, Frank Lucas, and Herman Boone. Washington is a featured actor in the films produced by Jerry Bruckheimer and was a frequent collaborator of the late director Tony Scott.

Washington was born in Mount Vernon, near New York City. His mother, Lennis "Lynne", was a beauty parlor owner and operator born in Georgia and partly raised in Harlem. His father, Reverend Denzel Hayes Washington, Sr., a native of Buckingham County, Virginia, served as an ordained Pentecostal minister, and also worked for the Water Department and at a local department store, S. Klein.

Washington attended grammar school at Pennington-Grimes Elementary School in Mount Vernon, until 1968. When he was 14, his parents broke up, and his mother sent him to a private preparatory school, Oakland Military Academy, in New Windsor, New York. "That decision changed my life," Washington later said, "because I wouldn't have survived in the direction I was going. The guys I was hanging out with at the time, my running buddies, have now done maybe 40 years combined in the penitentiary. They were nice guys, but the streets got them." After Oakland, Washington next attended Mainland High School, a public high school in Daytona Beach, Florida, from 1970 to 1971. Washington was interested in attending Texas Tech University: "I grew up in the Boys Club in Mount Vernon, and we were the Red Raiders. So when I was in high school, I wanted to go to Texas Tech in Lubbock just because they were called the Red Raiders and their uniforms looked like ours." Washington attended Texas College, and earned a B.A. in Drama and Journalism from Fordham University in 1977. At Fordham he played collegiate basketball as a guard under coach P. J. Carlesimo. After a period of indecision on which major to study and dropping out of school for a semester, Washington worked as creative arts director at an overnight summer camp, Camp Sloane YMCA in Lakeville, Connecticut. He participated in a staff talent show for the campers and a colleague suggested he try acting.

Returning to Fordham that fall with a renewed purpose and focus, he enrolled at the Lincoln Center campus to study acting and was given the title roles in both Eugene O'Neill's The Emperor Jones and Shakespeare's Othello. Upon graduation he attended graduate school at the American Conservatory Theatre in San Francisco, where he stayed for one year before returning to New York to begin a professional acting career.

Washington spent the summer of 1976 in St. Mary's City, Maryland, in summer stock theater performing Wings of the Morning, the Maryland State play, which was rewritten for him by incorporating an African-American character/narrator. He also filmed a series of commercials in the Fruit of the Loom ensemble, as Grapes. Shortly after graduating from Fordham, Washington made his professional acting debut in the 1977 made-for-television film Wilma Purple, and his first Hollywood appearance in the 1981 film Carbon Copy. Washington shared a 1982 Distinguished Ensemble Performance Obie Award for playing Private First Class Melvin Peterson in the Off-Broadway Negro Ensemble Company production A Soldier's Play which premiered November 20, 1981.

A major career break came when he starred as Dr. Phillip Chandler in the television hospital drama St. Elsewhere which ran from 1982 to 1988 on NBC. He was one of only a few African American actors to appear on the series for its entire six-year run. Washington also appeared in several television, motion picture, and stage roles such as the films A Soldier's Story (1984), Hard Lessons (1986) and Power (1986). In 1987 Washington starred as South African anti-apartheid political activist Steven Biko in Richard Attenborough's Cry Freedom for which he received a nomination for the Academy Award for Best Supporting Actor. In 1989 Washington won an Academy Award for Best Supporting Actor for playing a defiant self-possessed ex-slave soldier in the film Glory. Also that year he appeared in the film The Mighty Quinn, and as the conflicted and disillusioned Reuben James, a British soldier who, despite a distinguished military career, returns to a civilian life where racism and inner city life leads to vigilantism and violence in For Queen and Country.

1991, Washington starred as Bleek Gilliam in the Spike Lee film Mo' Better Blues. In 1992, he starred as Demetrius Williams in the romantic drama Mississippi Masala. Washington was reunited with Lee to play one of his most critically acclaimed roles as the title character of 1992's Malcolm X. His performance as the black nationalist leader earned him another nomination for the Academy Award for Best Actor. The next year he played the lawyer of a gay man with AIDS in the 1993 film Philadelphia. During the early and mid-1990s, Washington starred in several successful thrillers, including The Pelican Brief and Crimson Tide, as well as in comedy Much Ado About Nothing. 1996, he played a US Army officer, despondent about a deadly mistake he made, investigates a female chopper commander's worthiness for the Medal of Honor in Courage Under Fire with Meg Ryan. Also in 1996, alongside Whitney Houston in the romantic drama The Preacher's Wife.

In 1998, Washington starred in Spike Lee's film He Got Game. Washington played a father serving a six-year prison term who is propositioned by the warden to a temporary parole on the terms that he must convince his top-ranked high-school basketball player son (Ray Allen) into signing with the governor's alma mater, Big State. The film also marked the third time that Spike Lee and Washington worked on a film together.

In 1999, Washington starred in The Hurricane, a film about boxer Rubin 'Hurricane' Carter whose conviction for triple murder was overturned after he had spent almost 20 years in prison. A former reporter who was angry at seeing the film portray Carter as innocent despite the overturned conviction began a campaign to pressure Academy Award voters not to award the film Oscars. Washington did receive a Golden Globe Award in 2000 and a Silver Bear Award at the Berlin International Film Festival for the role.

In 2000, Washington appeared in the Disney film Remember the Titans which grossed over $100 million at the United States box office.

When Washington won a Golden Globe award for Best Actor in a Dramatic Movie in 2000, as he noted: "No African-American has won best actor in the Golden Globes since Sidney Poitier, until I did". That made him the first Black actor to win the award in 36 years.

He won an Academy Award for Best Actor in his next film, the 2001 cop thriller Training Day as Detective Alonzo Harris, a rogue and evil Los Angeles cop with questionable law-enforcement tactics. Washington was the second African-American performer to win an Academy Award for Best Actor, the first being Sidney Poitier who happened to receive an Honorary Academy Award the same night that Washington won. Washington holds the record (six so far) for most Oscar nominations and most wins (two so far) by an actor or actress of African descent.

Between 2003 and 2004, Washington appeared in a series of thrillers that performed generally well at the box office, including Out of Time, Man on Fire, and The Manchurian Candidate. In 2006, he starred in Inside Man, a Spike Lee-directed bank heist thriller co-starring Jodie Foster and Clive Owen, and Déjà Vu released in November 2006.

In 2006, Denzel worked alongside multi-talented Irish off-rock band The Script on their new project combining music and Hollywood. The hybrid of genres was critically acclaimed but didn't receive much mainstream attention due to a legal conflicts between the Script's record label and Denzel's studio commitments.

In 2007, he co-starred with Russell Crowe, for the second time after Virtuosity in 1995, in American Gangster. Washington directed and starred in the drama The Great Debaters with Forest Whitaker. Washington next appeared in the 2009 film The Taking of Pelham 1 2 3, a remake of the 1974 thriller The Taking of Pelham One Two Three, directed by Tony Scott as New York City subway security chief Walter Garber opposite John Travolta.

Washington was last seen onstage in the summer of 1990 in the title role of the Public Theater's production of Shakespeare's Richard III and in 2005, after a 15-year hiatus, he appeared onstage again in another Shakespeare play as Marcus Brutus in Julius Caesar on Broadway. The production's limited run was a consistent sell-out averaging over 100% attendance capacity nightly despite receiving mixed reviews.

Washington is planning a leading role in the classic play A Raisin in the Sun.

In 2010, Washington starred in The Book of Eli, a post-Apocalyptic drama set in the near future. Also in 2010, he starred as a veteran railroad engineer in the action film Unstoppable, about an unmanned, half-mile-long runaway freight train carrying a dangerous cargo. The film was directed by Tony Scott, and was the fifth and final collaboration between the two, following Crimson Tide (1995), Man on Fire (2004), Déjà Vu (2006) and The Taking of Pelham 1 2 3 (2009).

On June 25, 1983, Washington married Pauletta Pearson, whom he met on the set of his first screen work, the television film Wilma. The couple have four children: John David (b. July 28, 1984), who signed a football contract with the St. Louis Rams in May 2006 and has also played with the Sacramento Mountain Lions of the United Football League (John David also played college football at Morehouse); Katia (b. November 27, 1987), who graduated from Yale University with a Bachelors of Arts in 2010; and twins Olivia and Malcolm (b. April 10, 1991) (Malcolm graduated from the University of Pennsylvania with a degree in film studies and Olivia played a role in Lee Daniel's The Butler.). In 1995, the couple renewed their wedding vows in South Africa with Archbishop Desmond Tutu officiating.

Washington is a devout Christian, and has considered becoming a preacher. He stated in 1999, "A part of me still says, 'Maybe, Denzel, you're supposed to preach. Maybe you're still compromising.' I've had an opportunity to play great men and, through their words, to preach. I take what talent I've been given seriously, and I want to use it for good." In 1995, he donated $2.5 million to help build the new West Angeles Church of God in Christ facility in Los Angeles.

In mid-2004, Washington visited Brooke Army Medical Center (BAMC) at Fort Sam Houston, where he participated in a Purple Heart ceremony, presenting medals to three Army soldiers recovering in the hospital from wounds they received while stationed in Iraq. He also visited the Fisher House facilities that are also part of Fort Sam Houston, and after learning that additional Fisher House facilities were needed due to exceeded capacities, made a substantial donation to the Fisher House Foundation. Washington's other charity work includes donating $1 million to the Children's Fund of South Africa, and $1 million to Wiley College to resuscitate the college's debate team.

Washington is an Independent and he supported Barack Obama in 2008 and 2012.

The Revolutionary Armed Forces of Colombia named Washington as one of three people (the others being directors Oliver Stone and Michael Moore) with whom they were willing to negotiate for the release of three defense contractors that the group had held captive from 2003 to 2008.

In 2008, Washington visited Israel with a delegation of African American artists in honor of the Jewish state's 60th birthday.