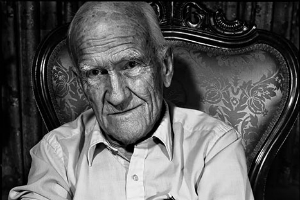 Henry Bradford Washburn, Jr. (June 7, 1910 – January 10, 2007) was an American explorer, mountaineer, photographer, and cartographer. He established the Boston Museum of Science, served as its director from 1939–1980, and from 1985 until his death served as its Honorary Director (a lifetime appointment).

Washburn is especially noted for exploits in four areas.

He was one of the leading American mountaineers in the 1920s through the 1950s, putting up first ascents and new routes on many major Alaskan peaks (often with his wife, Barbara Washburn, one of the pioneers among female mountaineers).

He pioneered the use of aerial photography in the analysis of mountains and in planning mountaineering expeditions. His thousands of striking black-and-white photos, mostly of Alaskan peaks and glaciers, are known for their wealth of informative detail and their artistry. They are the reference standard for route photos of Alaskan climbs.

He was responsible for creating maps of various mountain ranges, including Mount McKinley, Mount Everest, and the Presidential Range in New Hampshire.

His stewardship of the Boston Museum of Science.

Several of these achievements – e.g. the Everest map and subsequent further work on the elevation and geology of Everest – were carried out when Washburn was in his 70s and 80s.

Washburn was born on June 7, 1910, in Cambridge, Massachusetts, to a Boston Brahmin family whose roots trace back to Mayflower passenger Elder William Brewster. Brewster was the Pilgrim colonist leader and a spiritual elder of the Plymouth Colony. His father, the Very Rev. Henry Bradford Washburn, Sr. an avid outdoorsman, was dean of the Episcopal Theological School in Cambridge and Edith Buckingham Hall. His younger brother was Sherwood Larned Washburn, nicknamed "Sherry", who was a physical anthropologist and pioneer in the field of primatology.

Washburn was elected a Fellow of the American Academy of Arts and Sciences in 1956. He received an undergraduate degree from Harvard University, where he was a member of the Harvard Mountaineering Club. He returned to Harvard to earn a master’s degree in geology and geography in 1960.

Washburn was an avid pilot and made his first solo flight in a Fleet biplane at Boeing Field in Seattle in 1934. He earned his private flying license at Roosevelt Field on Long Island later that year.

Washburn embarked on a notable expedition in 1937 to 17,147 feet (5,226 m)Mount Lucania in the Yukon. To do this he and climbing partner Robert Bates had to reach Walsh Glacier, 8,750 ft (2,670 m) above sea level. He called upon Bob Reeve, a famous Alaskan bush pilot, who later replied by cable to Washburn, "Anywhere you'll ride, I'll fly". The ski-equipped Fairchild F-51 made several trips to the landing site on the glacier without event in May, but on landing with Washburn and Bates in June, the plane sank into unseasonal slush. Washburn, Bates and Reeve pressed hard for five days to get the airplane out and Reeve was eventually able to get the airplane airborne with all excess weight removed and the assistance of a smooth icefall with a steep drop. Washburn and Bates continued on foot to make the first ascent of Lucania, and after an epic descent and journey to civilization, they hiked over 150 miles through the wilderness to safety in the small town of Burwash Landing.

Washburn gathered many awards over the course of his career, including nine honorary doctorates, in 1980 the Alexander Graham Bell Medal from the National Geographic Society (NGS), the Centennial Award also of the National Geographic Society, and the King Albert Medal of Merit. He shared the two NGS awards with his wife Barbara, the first woman to summit Mount McKinley.

Washburn died of heart failure on January 10, 2007, at the age of 96, in a retirement home in Lexington, Massachusetts. In addition to his wife, he left a son, Edward, and two daughters, Dorothy and Elizabeth.

The Bradford Washburn American Mountaineering Museum (BWAMM) is devoted to mountaineering, the mountains, science and art, and the dissemination of knowledge – all things that Washburn exemplified. BWAMM is a joint project of the American Alpine Club, Colorado Mountain Club, and National Geographic Society, and is located in Golden, Colorado, Feb. 16, 2008.