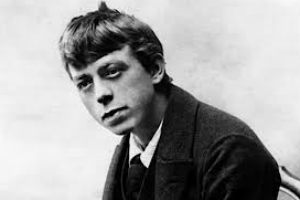 Walser was born into a family with many children. His brother Karl Walser became a well-known stage designer and painter. Walser grew up in Biel, on the language border between the German- and French-speaking cantons of Switzerland, and grew up speaking both languages. He attended primary school and progymnasium, which he had to leave before the final exam when his family could no longer bear the cost. From his early years on, he was an enthusiastic theatre-goer; his favorite play was The Robbers by Friedrich Schiller. There is a watercolor painting that shows Walser as Karl Moor, the protagonist of that play.

From 1892 to 1895, Walser served an apprenticeship at the Bernische Kantonalbank in Biel. Afterwards he worked for a short time in Basel. Walser's mother, who was "emotionally disturbed", died in 1894 after being under medical care for a long period. In 1895, Walser went to Stuttgart where his brother Karl lived. He was an office worker at the Deutsche Verlagsanstalt and at the Cotta'sche Verlagsbuchhandlung; he also tried, without success, to become an actor. On foot, he returned to Switzerland where he registered in 1896 as a Zürich resident. In the following years, he often worked as a "Kommis", an office clerk, but irregularly and in many different places. As a result, he was one of the first Swiss writers to introduce into literature a description of the life of a salaried employee.

In 1898, the influential critic Joseph Victor Widmann published a series of poems by Walser in the Bernese newspaper Der Bund. This came to the attention of Franz Blei, and he introduced Walser to the Art Nouveau people around the magazine Die Insel, including Frank Wedekind, Max Dauthendey and Otto Julius Bierbaum. Numerous short stories and poems by Walser appeared in Die Insel.

Until 1905, Walser lived mainly in Zürich, though he often changed lodgings and also lived for a time in Thun, Solothurn, Winterthur and Munich. In 1903, he fulfilled his military service obligation and, beginning that summer, was the "aide" of an engineer and inventor in Wädenswil near Zürich. This episode became the basis of his 1908 novel Der Gehülfe (The Assistant). In 1904, his first book, Fritz Kochers Aufsätze, appeared in the Insel Verlag.

At the end of 1905 he attended a course in order to become a servant at the castle of Dambrau in Upper Silesia. The theme of serving would characterize his work in the following years, especially in the novel Jakob von Gunten (1909). In 1905, he went to live in Berlin, where his brother Karl Walser, who was working as a theater painter, introduced him to other figures in literature, publishing, and the theater. Occasionally, Walser worked as secretary for the artists' corporation Berliner Secession.

In Berlin, Walser wrote the novels Geschwister Tanner, Der Gehülfe and Jakob von Gunten. They were issued by the publishing house of Bruno Cassirer, where Christian Morgenstern worked as editor. Apart from the novels, he wrote many short stories, sketching popular bars from the point of view of a poor "flaneur" in a very playful and subjective language. There was a very positive echo to his writings. Robert Musil and Kurt Tucholsky, among others, stated their admiration for Walser's prose, and authors like Hermann Hesse and Franz Kafka counted him among their favorite writers.

Walser published numerous short stories in newspapers and magazines, many for instance in the Schaubühne. They became his trademark. The larger part of his work is composed of short stories – literary sketches that elude a ready categorization. Selections of these short stories were published in the volumes Aufsätze (1913) and Geschichten (1914).

In 1913, Walser returned to Switzerland. He lived for a short time with his sister Lisa in the mental home in Bellelay, where she worked as a teacher. There, he got to know Lisa Mermet, a washer-woman with whom he developed a close friendship. After a short stay with his father in Biel, he went to live in a mansard in the Biel hotel Blaues Kreuz. In 1914, his father died.

In Biel, Walser wrote a number of shorter stories that appeared in newspapers and magazines in Germany and Switzerland and selections of which were published in Der Spaziergang (1917), Prosastücke (1917), Poetenleben (1918), Seeland (1919) and Die Rose (1925). Walser, who had always been an enthusiastic wanderer, began to take extended walks, often by night. In his stories from that period, texts written from the point of view of a wanderer walking through unfamiliar neighborhoods alternate with playful essays on writers and artists.

During World War I, Walser repeatedly had to go into military service. At the end of 1916, his brother Ernst died after a time of mental illness in the Waldau mental home. In 1919, Walser's brother Hermann, geography professor in Bern, committed suicide. Walser himself became isolated in that time, when there was almost no communication with Germany because of the war. Even though he worked hard, he could barely support himself as a freelance writer. At the beginning of 1921, he moved to Bern in order to work at the public record office. He often changed lodgings and lived a very solitary life.

During his time in Bern, Walser's style became more radical. In a more and more condensed form, he wrote "micrograms" ("Mikrogramme"), called thus because of his minuscule pencil hand that is very difficult to decipher: poems, prose, dramolets and novels – The Robber (Der Räuber). In these texts, his playful, subjective style moved toward a higher abstraction. Many texts of that time work on multiple levels – they can be read as naive-playful Feuilleton or as highly complex montages full of allusions. Walser absorbed influences from serious literature as well as from formula fiction and retold for example the plot of a pulp novel in a way that the original (the title of which he never revealed) was unrecognizable. Much of his work was written during these very productive years in Bern.

In the beginning of 1929, Walser, who had suffered from anxieties and hallucinations for quite a time, went to the Bernese mental home Waldau, after a mental breakdown, at his sister Fani's urging. In his medical records it says: "The patient confessed hearing voices." Therefore, this can hardly be called a voluntary commitment. While in the mental home, his state of mind quickly returned to normal, and he went on writing and publishing. More and more, he used the way of writing he called the "pencil method": He wrote poems and prose in a diminutive Sütterlin hand, the letters of which measured about a millimeter of height by the end of that very productive phase. Werner Morlang and Bernhard Echte were the first ones who attempted to decipher these writings. In the 1990s, they published a six-volume edition, Aus dem Bleistiftgebiet ('From the pencil area'). Only when Walser was, against his will, moved to the sanatorium of Herisau in his home canton Appenzell Ausserrhoden, did he quit writing, later telling Carl Seelig he was there to be crazy, not to write. Another reason might have been that with the rise of the Nazis in Germany, his works could no longer be published in any case.

In 1936, his admirer Carl Seelig began to visit him. He later wrote a book, Wanderungen mit Robert Walser about their talks. Seelig tried to revive interest in Walser's work by re-issuing some of his writings. After the death of Walser's brother Karl in 1943 and of his sister Lisa in 1944, Seelig became Walser's legal guardian. Though free of outward signs of mental illness for a long time, Walser was crotchety and repeatedly refused to leave the sanatorium.

In 1955, Walser's Der Spaziergang (The Walk) was translated into English by Christopher Middleton; it was the first English translation of his writing and the only one that would appear during his lifetime. Upon learning of Middleton's translation, Walser, who had fallen out of the public eye, responded by musing "Well, look at that."

Robert Walser loved long, lonely walks. On the 25th of December 1956 he was found, dead of a heart attack, in a field of snow near the asylum. The photographs of the dead walker in the snow are almost eerily reminiscent of a similar image of a dead man in the snow in Walser's first novel, Geschwister Tanner.

A characteristic of Walser's texts is a playful serenity behind which hide existential fears. Today, Walser's texts, completely re-edited since the 1970s, are regarded as among the most important writings of literary modernism. In his writing, he made use of elements of Swiss German in a charming and original manner, while very personal observations are interwoven with texts about texts; that is, with contemplations and variations of other literary works, in which Walser often mixes pulp fiction with high literature.

Walser, who never belonged to a literary school or group, perhaps with the exception of the circle around the magazine Die Insel in his youth, was a notable and often published writer before World War I and into the 1920s. After the second half of the latter decade, he was rapidly forgotten, in spite of Carl Seelig's editions, which appeared almost exclusively in Switzerland but received little attention.

Walser was only rediscovered in the 1970s, even though famous German writers such as Christian Morgenstern, Franz Kafka, Walter Benjamin, and Hermann Hesse were among his great admirers. Since then, almost all his writings have become accessible through an extensive republication of his entire body of work. He has exerted a considerable influence on various contemporary German writers, including Ror Wolf, Peter Handke, W. G. Sebald, and Max Goldt. In 2004, Spanish writer Enrique Vila-Matas published a novel entitled Doctor Pasavento about Walser, his stay on Herisau and the wish to disappear.