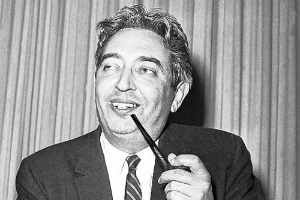 Irving Wallace (March 19, 1916 – June 29, 1990) was an American best-selling author and screenwriter. Wallace was known for his heavily researched novels, many with a sexual theme. One critic described him "as the most successful of all the many exponents of junk fiction perhaps because he took it all so seriously, not to say lugubriously". Wallace was a blue-collar writer who wrote for a blue-collar audience. Most critics were scornful of his novels' flat prose and pedestrian characters.

“Wallace's name is not to be found in directories of writers but he possessed the skill to entertain millions and he was seldom pretentious about it.”

Wallace was born in Chicago, Illinois to Bessie Liss and Alexander Wallace (an Americanized version of the original family name of Wallechinsky). The family was Jewish and originally from Russia. Wallace was named after his maternal grandfather, a bookkeeper and Talmudic scholar of Narewka. Wallace grew up in Kenosha, Wisconsin, where he attended Kenosha Central High School. He was the father of Olympic historian David Wallechinsky and author Amy Wallace.

Wallace began selling stories to magazines when he was a teenager. In World War II Wallace served in the Frank Capra unit in Fort Fox along with Theodor Seuss Geisel – better known as Dr Seuss – and continued to write for magazines. He also served in the First Motion Picture Unit of the Army Air Force. Soon, however, Wallace turned to a more lucrative job as a Hollywood screenwriter. He collaborated on such films as The West Point Story (1950), Split Second (1953), Meet Me at the Fair (1953), and The Big Circus (1959). He also contributed at least one script to the western television program "Have Gun, Will Travel".

After an unsatisfying stint in Hollywood, he devoted himself full-time to writing books. He published his first non-fiction work in 1955, The Fabulous Originals, and his first fiction offering, The Sins of Philip Fleming, in 1959. The latter, ignored by critics, was followed by the enormously successful The Chapman Report. Wallace published 33 books during his lifetime, all translated into 31 languages.

Irving Wallace was married to Sylvia Wallace, a former magazine writer and editor. Her first novel, The Fountains, was an American best-seller and published in twelve foreign editions. Her second novel, Empress, was published in 1980. She also helped produce, along with their two children, The Book of Lists #2 and The Intimate Sex Lives Of Famous People. Sylvia Wallace died October 20, 2006 at the age of 89.

Idiosyncratically, Wallace always used the definite article in the titles of his novels, including The Man, his most political and controversial novel.

Wallace loved and championed the underdog. He enjoyed writing the stories of outsiders, which interest saw light in The Square Pegs: Some Americans Who Dared to Be Different. With his son, daughter and wife he produced some notable non-fiction works, including three editions each of The People's Almanac and The Book of Lists. Many of the odd facts Wallace uncovered he utilised in his novels. He placed an advertisement in The Times for listomaniacs as a precursor to The Book of Lists and one of the respondents was Jeremy Beadle who sent a long list without knowing but suspecting that Wallace was behind the advert. Beadle was given Wallace's home phone number and the two men spent hours talking. Wallace said that Beadle's lists were the best of all those sent in. He invited the Englishman to become the London editor of The People's Almanac 2 (1978).