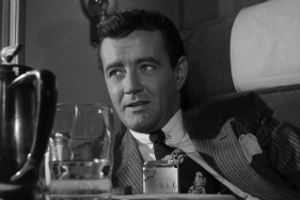 He started in youthful boy-next-door roles, one of them opposite his first wife Jennifer Jones. He also played Jerome Kern in Till the Clouds Roll By. Twice divorced by the time he was 30, he suffered from alcoholism and mental illness.

Born in Salt Lake City, Utah, to Zella (née McQuarrie) and Horace Walker, he was the youngest of four sons. Emotionally scarred by his parents' divorce when he was still a child, he subsequently developed an interest in acting which led his maternal aunt Hortense (McQuarrie) Odlum (the president of Bonwit Teller) to offer to pay for his enrollment at the American Academy of Dramatic Arts in New York City in 1937. Walker lived in her home during his first year in the city.

While attending the American Academy of Dramatic Arts, Walker met fellow aspiring actress Phylis Isley, who later took the stage name Jennifer Jones. After a brief courtship, the couple were married in Tulsa, Oklahoma on January 2, 1939 and moved to Hollywood to find work in films, but their prospects proved to be meager and they soon returned to New York.

Walker found work in radio while Phylis stayed home and gave birth to two sons in quick succession, actor Robert Walker, Jr. (born April 15, 1940) and Michael Walker (March 13, 1941 – December 27, 2007). Phylis then returned to auditioning where her luck changed when she was discovered in 1941 by producer David O. Selznick, who changed her name to Jennifer Jones and groomed her for stardom. During their initial meetings, Selznick was highly attracted to Jones and they quietly began an affair.

The couple returned to Hollywood, and Selznick's connections helped Walker secure a contract with Metro-Goldwyn-Mayer, where he started work on the war drama Bataan (1943). Walker's charming demeanor and boyish good looks caught on with audiences, and he worked steadily playing "boy-next-door" roles in films such as See Here, Private Hargrove (1944) and Her Highness and the Bellboy (1945). He also appeared in Selznick's Since You Went Away (1944) in which he and his wife portrayed doomed young lovers. By that time, Jones' affair with Selznick was common knowledge, and Jones and Walker separated in November 1943, in mid-production. The filming of their love scenes was torturous as Selznick insisted that Walker perform take after take of each love scene with Jones. She filed for divorce in April 1945.

That year, Walker starred in the film The Clock opposite Judy Garland in her first straight dramatic film. Although Walker continued to work steadily in Hollywood, he was distraught over the divorce and was soon prone to drinking, emotional outbursts and eventually, a nervous breakdown.

In 1946, Walker starred in Till the Clouds Roll By, where he played the song writer Jerome Kern. He starred as composer Johannes Brahms in Song of Love (1947), which co-starred Katharine Hepburn and Paul Henreid. In 1948, Walker starred with Ava Gardner in the film One Touch of Venus, directed by William A. Seiter. The film was a non-musical comedy adapted from a Broadway show with music by Kurt Weill. He married Barbara Ford, the daughter of director John Ford, in July 1948, but the marriage lasted only five months.

He spent time at the Menninger Clinic in 1949 where he was treated for a psychiatric disorder.

Following his discharge from the clinic, he was cast by acclaimed director Alfred Hitchcock for Strangers on a Train (1951). His performance as the psychopathic Bruno Anthony was highly lauded and considered to be his finest role. His emotional problems largely behind him, and his career on an upswing, Walker spent the summer with his sons, and was considering the possibility of remarrying.

His final film role was in the title role of the anti-Communist film, My Son John (1952). Walker died before production finished, and so angles from his death scene in Strangers were spliced into a similar melodramatic dying scene near the end of the film.

Walker was a member of The Church of Jesus Christ of Latter-day Saints and strongly embraced his Mormon faith and values until his death.

On the night of August 28, 1951, Walker's housekeeper found the actor in an emotional state. She called Walker's psychiatrist who arrived and administered amobarbital for sedation. Walker was allegedly drinking prior to his emotional outburst, and it is believed the combination of amobarbital and alcohol resulted in a severe reaction. As a result, he passed out and stopped breathing, and all efforts to resuscitate him failed. Walker was 32 years old.