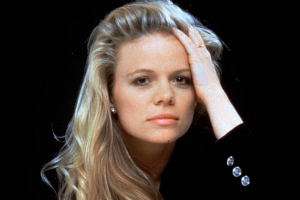 Marcy Lynn Walker (born November 26, 1961), also known as Marcy Smith, is an American minister and former actress known for her television appearances on daytime soap operas. Her most famous roles are those of Liza Colby on All My Children, which she played from 1981–1984 and again 1995–2005, and as Eden Capwell on Santa Barbara from 1984–1991.

Walker was born in Paducah, Kentucky and traveled the world during her youth. In 1979, she graduated from Triad High School in Troy, Illinois, where she was active in the drama club. She also attended Antelope Valley High School in Lancaster, California in 1975–1978.

Marcy has one son, Taylor, from her third husband, Stephan Collins. In 1999, she married Doug Smith and goes by the name Marcy Smith in her private life. At one point, she was romantically involved with former All My Children costar Michael E. Knight, who played Tad Martin on the show. She was briefly engaged to actor Bronson Pinchot during the mid-1980s. She was once married to actor Billy Warlock. In a 1998 interview with Soap Opera Digest, she explained the breakup.

He thought I was somehow more valuable than him and I could never live it down. I couldn't jump off the pedestal. He was unhappy about everything and I couldn't be happy about anything. I think that Billy is fantastic and, in his heart, he's one of the nicest people that you'll ever meet. It's just that he hasn't been acknowledged a lot in his life and he needs—and deserves—a lot of everything. I was just not the person who was able to give it to him. Unfortunately, if you really love someone, you let them know when they're bad, as well as when they're good. He needed as much positive reinforcement as he could get and never wanted to hear the negative. I learned that too late. I often played the devil's advocate, thinking I was helping by being honest.

In 1981, Walker was cast in her first acting job on a daytime serial as Liza Colby on the ABC Television soap opera, All My Children. (She had turned down an offer to join the cast of As the World Turns.) She was honored with two Outstanding Supporting Actress Daytime Emmy nominations in 1983 and 1984. After a successful three-year run, she decided to leave the show for other opportunities. She was replaced promptly with actress Alice Haining, as Liza Colby on the show.

In 1984, Walker created another popular soap opera role in the form of Eden Capwell on Santa Barbara. Her character, partnered with A Martinez's character, Cruz Castillo, became one of the show's most popular supercouples. She was nominated for Daytime Emmy Award for Outstanding Lead Actress in a Drama Series in 1987 and 1988, and finally won in 1989 for an emotional storyline in which her character was brutally attacked and raped. She left the show in 1991.

In 1993, she started playing the role of Tangie Hill on Guiding Light. While the role was created specifically for Walker, the character didn't catch on with the audience. The actress declined to renew her contract in mid-1995 and left the show. Walker then made a long-awaited comeback appearance as Liza Colby on All My Children in September 1995. In 2001, she was nominated for another Outstanding Lead Actress Daytime Emmy award.

On August 5, 2004, The Wilton Bulletin, a Connecticut newspaper, reported Walker's intention to become a full-time children's ministry director at Hope Church in Wilton, Connecticut upon the expiration of her ABC Television contract the following September. The actress had been interviewed for the article on July 20, 2004. On August 20, 2004, soapcentral.com reported that Walker's All My Children contract had not been renewed. Her farewell appearance on All My Children aired on September 28, 2004.

The exit of Liza Colby occurred amid rumor that Walker would return to the show on a recurring basis. This rumor was fueled by the fact that her exit was very open-ended. She was not killed off, like some notable fan favorites like Jesse Hubbard, played by Darnell Williams, but rather assumed a new identity. Her character simply decided to take her daughter to live out of reach from her controlling ex-husband Adam Chandler, played by David Canary.

According to Soap Opera Digest magazine, Walker was at first hesitant to go on a recurring basis, but later warmed to the idea. In December 2004, the writers created a scene where Liza appeared making a phone call. Walker appeared again in January 2005, when her character assisted Babe Carey Chandler and Jamie Martin, in their attempt to flee from Adam's wrath. The characters of Babe and Jamie were played by Alexa Havins and Justin Bruening.

Former head writer Megan McTavish spoke to the soap media and publicly thanked Walker for working without a contract, but also hinted that she did not intend for Liza to return to the show any time soon. However, in 2009, the character of Liza returned, albeit played this time by actress Jamie Luner.

After Walker left All My Children, she decided to accept a position in Christian ministry, based in Huntersville, North Carolina, where she remains working with youth.

In addition to her work with daytime soap operas, Walker has starred in several movies of the week, including The Return of Desperado, Bar Girls, Midnight's Child, and Terror In the Shadows.