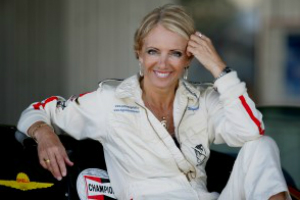 Patty Wagstaff (née Patricia Rosalie Kearns Combs; born 11 September 1951 in St. Louis, Missouri) is an aerobatic pilot from the United States. Wagstaff traveled all over the world as a child; her father was a pilot for Japan Airlines, and Wagstaff would travel to Southeast Asia, Australia and Alaska to prepare for her own career as a pilot. Her first lesson was on a Cessna 185; since then, she has earned licenses to fly multiple classes of aircraft, including helicopters. Her sister, Toni, is a pilot for Continental Airlines.

In 1985 Wagstaff qualified for the US Aerobatic Team and competed until 1996. She was the top U.S. medal winner, winning gold, silver and bronze medals in international competition for several years. In 1987 she earned the Rolly Cole memorial award for her contributions to the aerobatic sports, and in 1991, she won her first of three US National Aerobatic Championships, the first woman to win that competition. In 1991, Western Flyer's Magazine readers chose her as their favorite pilot. She was the International Aerobatic Club champion in 1993. In 1994, her Goodrich-sponsored Extra 260 airplane was put on display next to Amelia Earhart's Lockheed Vega at the Smithsonian Institution's National Air and Space Museum.

From 1988 to 1994, she won the Betty Skelton First Lady of Aerobatics award six times in a row.

In 1996 Wagstaff was the top-scoring US pilot at the World Aerobatics Championship. In 1996 she also won the GAN & Flyer Magazine Reader's Choice award as favorite female pilot, as well as the Charlie Hillard trophy.

Based in St. Augustine, Florida, Wagstaff continues working in the aviation field as an airshow pilot, stunt pilot for films, consultant, flight instructor and author. She is Emeritus Board Member of the Smithsonian Institution, National Air and Space Museum. She was on the Presidential Advisory Committee to the Centennial of Flight commission. She flies airshows across North America in a variety of airplanes including the Extra, T-6 and P-51 Mustang. In addition to airshows, Wagstaff has flown OV-10 Broncos as a seasonal firefighter in California.

Wagstaff is an instrument-rated pilot who flies herself to her airshow performances. She has owned a Beechcraft Baron and a Cirrus, and currently flies a V-Tailed Beechcraft K-35 with her two dogs and parrot.