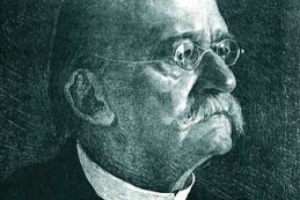 Adolph Wagner (25 March 1835 – 8 November 1917) was a German economist and politician, a leading Kathedersozialist (academic socialist) and public finance scholar and advocate of Agrarianism. Wagner's Law of increasing state activity is named after him.

Born in Erlangen as the son of a university professor, the physiologist Rudolf Wagner, Adolph studied economics at the University of Göttingen, receiving a doctorate in 1857. Wagner’s academic career took him first to the Merchants’ Superior School, Vienna (1858–1863), then – after failing to secure a chair at the University of Vienna because of disagreements over fiscal policy with Lorenz von Stein – to the Hamburg Higher Merchants’ School (1863–1865), both institutions comparable to business schools today. In 1865, he took the chair of Ethnography, Geography, and Statistics (in reality an economics professorship) at the University of Dorpat in Livonia.

In Dorpat (Tartu), Wagner "became a follower of Bismarck’s policy for unifying Germany under Prussian guidance. (Rubner, 435) Thus when German unification became realistic, Wagner wanted to go back to Germany proper – a general attitude of Baltic Germans. Beginning Fall Term 1868/69, Wagner therefore took over the Chair of the Cameralistic subjects (roughly, state management) at the Badensian University of Freiburg im Breisgau, and very soon afterwards, in 1870, the Chair of Staatswissenschaften at the University of Berlin, by that time not only the premier university in Germany but probably in the world. It was in Berlin, that Wagner unfolded his tenure as one of the intellectually and politically most influential economists of his time. A former student of his, Werner Sombart, was his successor at the economics chair of the University of Berlin.

Wagner was an early member of the conservative Christian Social Party, founded in 1878 by Adolf Stoecker as the Christlichsoziale Arbeiterpartei (Christian Social Workers' Party).

Wagner is the main protagonist of a specific school of economics and social policy, called "State Socialism" ("Staatssozialismus"), which is a specific form of Kathedersozialismus. (Albert Schäffle (1831–1903), Lujo Brentano (1844-1931), Gustav von Schmoller (1838-1917) and Karl Rodbertus(-Jagetzow) (1805–1875) were important protagonists of that thought as well.) He was a member of the Historical School, as his general review essay on Marshall's Principles of Economics so clearly demonstrates. However, he did fundamentally differentiate himself from what he called the 'younger' and more 'extreme' members of the German historical school such as Gustav von Schmoller who, according to Wagner, tended to dismiss too hastily what the latter terms the more deductive work of English writers (in short, those in the tradition of classical economics, including the famous contemporary Cambridge University Professor Alfred Marshall whose book he was reviewing).

Wagner had a very combative and harsh personality. He did not take insults lightly and never phrased things diplomatically. As was mentioned, he had difficulties with Schmoller and was an enemy of Lujo Brentano – and these two were about his closest colleagues. By all contemporary accounts, it is probably fair to say that Wagner must have been vain, easily hurt, and extremely choleric. In the 1890s, Wagner would so enrage an industrial-conservative member of the Reichstag, likewise with a defense of the Kathedersozialist influence within the University, that that deputy challenged him to a duel. (Wagner did not categorically refuse, but it was never fought.) An even more famous case was Wagner’s altercation with Eugen Dühring (against whom Friedrich Engels' Anti-Dühring is directed), and which in the very end resulted in Dühring's remotion and dismissal from the University of Berlin.

Together with Gustav von Schmoller, Adolph Wagner belongs to the most important economists of the Bismarck period. He was a member of the Verein für Socialpolitik (Society for Social Policy).

His works have prepared the development of the monetary and credit system in Germany and substantially influenced the central bank policy and financial practice before World War I.