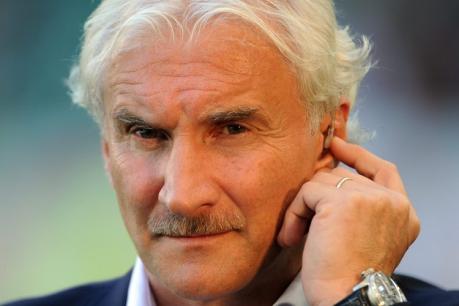 Rudolf 'Rudi' Völler (Nickname Tante Käthe), born 13 April 1960 in Hanau, Hesse is a former German international footballer, and a former manager of the German national team. He won the FIFA World Cup in 1990 as a player and coached the national team to second place at the 2002 World Cup.

Völler joined the Bundesliga team Werder Bremen in 1982, winning his first cap for Germany in the same year. Following a successful season, in which he became the Bundesliga's top scorer, foreign clubs became interested in the striker, and in 1987 he was transferred to A.S. Roma, where he became a mainstay of the team and earned the nickname 'il tedesco volante' (the flying German). He won the Italian Cup in 1991, and was the club's top scorer on several occasions.

In 1992, Roma decided to sell Völler to Olympique Marseille, where he was intended as replacement for superstar striker Jean-Pierre Papin. That also allowed Roma to add Claudio Caniggia as its third foreigner to the squad, so both parties were happy to let the deal go through. There he won his biggest club honour in a very successful first season, thanks to the Champions League with Marseille won in 1993. Völler started the match, and played 78 minutes. Marseille was then caught in a bribery scandal, was stripped of its 1993 league title, and were relegated despite its second place in 1994. Völler scored 24 league goals for the club, but left when it was relegated. Returning to Germany, he joined Bayer Leverkusen in 1994, where he ended his career as a player in 1996 and started a career in the management of the club.

Völler was capped 90 times for the national team, scoring 47 goals, including eight in World Cup final rounds. He was a member of the team that won the 1990 World Cup. He scored three times in the tournament, including one goal in a 4–1 win over Yugoslavia, and then found the net twice against the United Arab Emirates in a 5–1 win. During the second-round game against Netherlands, Völler and Dutch player Frank Rijkaard were sent off the field after a spitting incident. Völler came back to play and star for Germany in both the semi-final and final, which Germany ended up winning by 1–0.

The unsavoury incident that took place during the second-round match with Holland started when Rijkaard was booked for a bad tackle on Völler. As Rijkaard took up position for the free kick, he spat in Völler's hair. Völler complained to the referee and was booked as well. From the resulting free kick, Völler dived to avoid a collision with Dutch Keeper Hans van Breukelen, although it did also look as if he dived for a penalty. Van Breukelen was angry at this, but Rijkaard again confronted Völler by twisting his ear and stamping on his foot. Both Völler and Rijkaard were sent off, but Rijkaard again spat in Völler's hair as they left the pitch and was rumoured to have repeated this on the touchline. Rijkaard later stated that it was his fault: "That day I was wrong. There was no insult. I always had much respect for Rudi Völler. But I went berserk when I saw that red card. I talked to him after the match and I apologized. I'm very happy that he accepted. I have no bad feeling about him now. We even posed for a very funny advert together, years after." (Rijkaard had family problems in this time).

Völler also played in Euro 84, he scored twice in a group match against Romania which the Germans won 2–1 but a 90th minute defeat against Spain in their next game saw West Germany eliminated when all they needed was a draw.

At the 1986 World Cup, Völler scored the West Germans' equalizer in a 2–1 win over Scotland in the group stage. He bagged a last minute goal against France in the semi final to seal a 2–0 win and in the final itself his 80th minute goal made it 2–2 against Argentina. West Germany had been 2–0 down but lost the match 3–2. Völler became the third, and to this day the last player to score as a substitute in the World Cup final, after Dick Nanninga in 1978 and Alessandro Altobelli achieved this feat in 1982.

West Germany hosted the Euro 88, and Völler scored twice in a 2–0 win over Spain but the hosts lost to eventual winners Holland in the semi final.

He was again selected for the Euro 92 but was sent home when he suffered an injury in the opening game with CIS.

At the 1994 World Cup Völler was kept out of the starting line up for all three group games by Jürgen Klinsmann and Karl-Heinz Riedle who scored five between them. He made just one sub appearance in the group stages. He did start the second round tie with Belgium and scored twice in a 3–2 win.

After a disappointing Euro 2000 for the national team under manager Erich Ribbeck, the DFB appointed Völler as new manager, even though he then did not have a coaching licence. At first only planning to manage the national team for one year, he extended his contract when his planned successor Christoph Daum was involved in a drug scandal. Despite losing to England 5–1 at home, he managed to lead the team to a surprising appearance in the final of the 2002 World Cup.

After a first-round exit from Euro 2004, he resigned from his post.

Following his resignation from the German national job, Völler briefly made a comeback at A.S. Roma in 2004, this time as manager. Hired in late August as a last-minute appointment after the shock resignations of Cesare Prandelli, he left the club only one month later after a series of poor results and high-profile disagreements with players, notably Antonio Cassano. He only signed a one-year contract to allow a return of Prandelli the next year, but presided over only one draw and two defeats in the league.

Völler was (and still is) very popular in Germany. Even when the national squad achieved only modest results, Völler never lost his popularity as the German public knew he was achieving as much as possible with a relatively limited squad. His predecessor Berti Vogts by contrast was widely "slagged off" by everybody even during periods of success with a far more talented German squad. The public even forgave Völler when – during a TV interview in September 2003 – he lost his temper, used profanity, even attacked and yelled at the presenter Waldemar Hartmann in order to defend his team against unfair press statements.