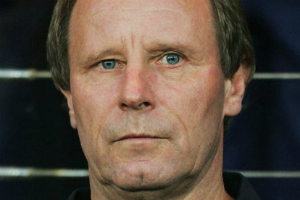 Hans-Hubert "Berti" Vogts (born 30 December 1946 in Büttgen) is a German former footballer. He played for Borussia Mönchengladbach and won the World Cup with West Germany in 1974. He later managed Germany (winning Euro 96 with them), Scotland and Nigeria. He is currently manager of the Azerbaijan national team.

Vogts joined the boys' football team of local sports club VfR Büttgen in 1954 at the age of seven, staying with them until his 1965 transfer to Borussia Mönchengladbach. A right-side defender, his tenacity earned him the nickname "Der Terrier".

He was one of the key figures during Borussia's golden years in the 1970s, when it won the Bundesliga five times, the German Cup once, and the UEFA Cup twice. Vogts also played in the 1977 European Cup Final defeat by Liverpool.

Vogts made 419 Bundesliga appearances for Mönchengladbach, scoring 32 times and also appeared 64 times for the club in European competition, scoring 8 goals. Vogts remained with Mönchengladbach until he retired from playing in 1979.

Vogts played 9 international boys' games for West Germany, made 3 appearances for the under-23s team, and has 96 senior caps, making him one of Germany's most capped players. He was captain for 20 of the senior games, scored one international goal and was also a member of the German national team that won the 1974 World Cup. Nicknamed “Der Terrier” for always fighting for every ball as if it were his last, Vogts was a big favourite with his home crowd. Vogts famously marked, and subdued, Johan Cruyff, in the final of the 1974 World Cup in Munich, West Germany.

During the match between West Germany and Austria on 21 June 1978 in the second round of the 1978 FIFA World Cup he scored an own goal, allowing Austria to beat West Germany for the first time in 47 years and preventing West Germany from moving on to the next round. In Austria this match is fondly known as the Miracle of Cordoba.

After his playing career ended, he became a coach for West Germany's under-21 national team, and continued in that role until 1990. Starting in 1986, he became an assistant manager of the senior national side.

In 1990, he was promoted to manager of the national team as successor of Franz Beckenbauer. After the final match, Beckenbauer famously said that the reunified Germany will "probably be unbeatable for years", a statement which turned out to be a burden for Vogts during the upcoming years. Although Vogts led the German national team to a Euro 1992 runner-up place and a Euro 1996 win, two World Cup quarter-final defeats in 1994 and 1998 are also on his sheet. He stepped down as manager in September 1998.

After some time out of managing, he was appointed manager of Bayer Leverkusen in November 2000. The following May, despite earning Bayer Leverkusen Champions League qualification, he was sacked. He became manager of the Kuwait national team in August 2001.

After six months with Kuwait, Vogts resigned to assume the position of manager of the Scottish national team.  In attempting to qualify for the 2004 European Championships, Vogts took Scotland to a play off place. In the play offs Scotland were drawn against the Netherlands and Vogts led them to a 1–0 victory at Hampden Park, but the Netherlands beat Scotland 6–0 in the return leg. The Scottish press became notably more hostile towards Vogts following a series of defeats in friendly matches which caused the team to drop to a record low in the FIFA World Rankings.[6] An October 2004 draw with Moldova essentially put paid to Scotland's hopes of qualifying for the 2006 World Cup, and Vogts resigned the following month, with a year and a half remaining on his contract, citing "disgraceful abuse".

In January 2007, Vogts was appointed manager of Nigeria and signed a four-year contract. After a thirteen-month spell, he resigned following a poor performance at the 2008 African Nations Cup.

In April 2008, he was appointed manager of Azerbaijan on a two-year contract. He extended his contract with AFFA until the end of qualifying of Euro 2012 after successful results.