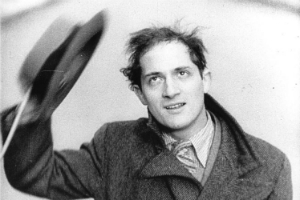 Vigo was born to Emily Clero and the prominent Spanish/Catalan militant anarchist Eugeni Bonaventura de Vigo i Sallés (who adopted the name Miguel Almereyda - an anagram of "y'a la merde", which translates as "there's the shit"). Much of his early life was spent on the run with his parents. His father was strangled in his cell in Fresnes Prison on the night of 13 August 1917; allegedly the authorities were responsible. The young Vigo was subsequently sent to boarding school under an assumed name, Jean Sales, to conceal his identity.

Vigo was married and had a daughter, Luce Vigo (a film critic) in 1931. He died in 1934 of complications from tuberculosis, which he had contracted eight years earlier.

Vigo is noted for two films which affected the future development of both French and world cinema: Zéro de conduite (1933) and L'Atalante (1934). Zéro de conduite was approvingly described by critic David Thomson as "forty-four minutes of sustained, if roughly shot anarchic crescendo." L'Atalante was Vigo's only full-length feature; the simple story of a newly-married couple splitting and reuniting is notable for the way it effortlessly merges rough, naturalistic filmmaking with shimmering, dreamlike sequences and effects. Thomson described the result as "not so much a masterpiece as a definition of cinema, and thus a film that stands resolutely apart from the great body of films."

His career began with two other films: À propos de Nice (1930), a subversive silent film inspired by Bolshevik newsreels which considered social inequity in 1920s Nice; and Taris, roi de l'eau (1931), a motion study of swimmer Jean Taris. None of his four films were financial successes; at one point, with his and his wife's health suffering, Vigo was forced to sell his camera.

Zéro de conduite was banned by the French government until after the war, and L'Atalante was mutilated by its distributor. By this point, Vigo was too ill to strenuously fight the matter. Both films have outlived their detractors; L'Atalante was chosen as the 10th-greatest film of all time in Sight & Sound's 1962 poll, and as the 6th-best in its 1992 poll. In the 1990s a complete copy of L'Atalante was found in Italy, and the print was restored to its original version.

Writing on Vigo's career in The New York Times, Andrew Johnston (critic) stated: "The ranks of the great film directors are short on Keatses and Shelleys, young artists cut off in their prime, leaving behind a handful of great works that suggest what might have been. But one who qualifies is Jean Vigo, the French director who died of tuberculosis at age 29 in 1934."