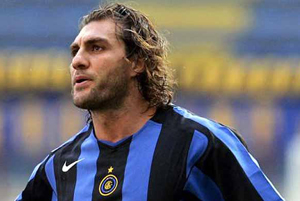 Christian Vieri (born 12 July 1973 in Bologna) is a retired Italian footballer who played as a centre forward.

Vieri was named in the FIFA 100, a list of the 125 greatest living footballers selected by Pelé as a part of FIFA's centenary celebrations.[1] For a number of years he was regarded as one of the finest strikers in Europe, leading to him becoming the world's most expensive footballer in 1999 when Internazionale paid Lazio £32 million for his services. This record has since been broken only a handful of times.

Somewhat of a footballing nomad, Vieri played for no fewer than 12 clubs throughout his career. Most notable were his spells at Juventus, Atlético Madrid, Lazio and Inter; with Inter he hit the net on more than 100 occasions. Vieri has often been described as an old fashioned centre forward, due to his physical presence and outstanding aerial ability, he is the all time top scorer of headed goals in Italian league history.

As well as picking up several winners medals during his career, Vieri also claimed many individual honours including the Pichichi and Capocannoniere (top scorer) titles in Spain and Italy and Italian Footballer of the Year twice. He is one of Italy's highest ever World Cup scorers with 9 goals from 9 matches at the 1998 and 2002 World Cups respectively.

Born in Bologna, Italy,[3] his family moved to Australia in the 1970s, residing in the suburb of Wetherill Park in South-Western Sydney and he attended Prairiewood High School. His father, Roberto Vieri played for Sydney-based club Marconi Stallions. It is from his father that he inherited his nickname "Bobo" which he carried with him throughout his career.

During his time in Australia, Vieri developed a love for both football and cricket, a sport he still follows to this day. He stated in an interview that he would have liked to have been a professional cricketer.[4][5] His brother, Massimiliano Vieri, is also a professional footballer and was an Australian international in 2004. Vieri played for Marconi Juniors when he was a child but his family soon moved back to Italy.

Vieri started his playing career at Marconi Stallions. While there, he was spotted by Torino and played his first Serie A game the next year for the Turin team. Vieri made six appearances in the league as well as in the Coppa Italia. He also picked up a runners up medal as an unused substitute in the 1992 UEFA Cup Final, as Torino lost the tie to Ajax on away goals. In November 1992, he was sold to Serie C club, Pisa Calcio, scoring two goals. Another season went by, he then moved to Ravenna in Serie B, scoring 12 goals. He was subsequently sold to Venezia in Serie F, scoring 11 goals. Another move followed for the youngster, this time to Atalanta where he scored seven goals. A change of luck came when he was spotted by Juventus in the 1996–97 season. He made 23 appearances and scored eight goals in Serie A, and six goals in ten matches in Europe, making him joint topscorer for Juventus that season along with Alen Bokši?.

Vieri was on the move once again, this time it was to Spain and Atlético Madrid. He scored a total of 24 goals in 24 league appearances for Atlético (and an additional five goals from seven appearances in Europe), which led him to the win the Pichichi Trophy, as the league's top scorer. In an interview with Marca magazine shortly after arriving at the Calderón, he had Spanish readers hot-footing it to internet search engines when he named his all-time sporting hero as Australian cricketer Allan Border.[6]

After the 1998 World Cup, he moved to Lazio, where he was outstanding in his first season, scoring 12 goals in Serie A and one in Europe, winning the Cup Winners' Cup in the final of which came his sole European goal that season. But it all changed when he was spotted by Inter and its chairman Massimo Moratti. Vieri's move to Internazionale was for a (then) world record transfer fee of £32 million. Then manager Marcello Lippi had requested the player after their successful season together at Juventus. According to rumour, Vieri took on the number 32 jersey at Inter as a reflection of his hefty price tag.

At Inter, Vieri formed a potentially dangerous partnership with Ronaldo up front, but because of injuries to both players, they were not able to play together often. He was impressive in his first couple of seasons, but constant managerial changes meant that Inter could not challenge for the Scudetto. It was under disciplined Argentinian coach Héctor Cúper, that Vieri and Inter really began to flourish and challenge for honours. Vieri was made the focal point of the attack and scored 22 goals in 25 games in the 2001–02 season as Inter narrowly missed out on the Scudetto after their last-day defeat to Lazio. The following season he was Serie A Capocannoniere after scoring 24 goals in 23 appearances. In addition, he scored 3 goals in Inter's Champions League campaign and formed a potent partnership with Hernán Crespo. He scored both of Inter's goals in the quarter-final victory over Valencia. Vieri was injured during the second leg of this game and therefore played no part in the semifinal defeat to city rivals Milan.

The following year, Cúper was sacked only a few games into the season and was replaced by Alberto Zaccheroni. Vieri did not get along with his new manager[7] and also had many of the Inter fans turn on him after his dip in form. In addition, he had shown his discontent at the sale of strike partner Crespo to Chelsea. When Roberto Mancini replaced Zaccheroni in the summer of 2004, Vieri played the majority games upfront with Adriano. It was clear to many though that the injury he had sustained against Valencia had taken its toll on Vieri and he was no longer as sharp in front of goal, despite his respectable goal output.

In July 2005, Vieri and Internazionale came to a mutual agreement to terminate his contract with the club. He was then signed by cross-town rivals Milan, but left the Rossoneri - where he was not a regular starter - after just six months, joining French side Monaco in order to play regularly and gain a place on Italy's roster for the 2006 World Cup. However, he suffered a serious knee injury while playing for Monaco in 2006, which required extensive surgery and ruled out the possibility of playing in his third consecutive FIFA World Cup.

Vieri agreed a one-year deal with Sampdoria on 6 July 2006. However, Vieri returned to Atalanta on 29 August, signing a one-year minimum wage contract worth 1500€ per month. Although he received a paltry salary, Vieri was to earn another €100,000 for every goal he scored, leaving chairman Ivan Ruggeri to comment, "If things go well, Vieri will cost me €2 million." Vieri scored 2 goals in 7 substitute appearances, including one spectacular long-range effort.

In June 2007, Atalanta announced they chose not to offer a contract extension to Vieri. His contract therefore ended on 30 June and was signed on a one-year deal with Fiorentina. He was officially presented to the press on 21 July 2007.[9][10] He signed a one-year-contract for Atalanta on 30 June 2008. However, both Atalanta and Vieri mutually agreed that his contract will be rescinded, after only making nine appearances.[11] He announced his retirement on 20 October 2009.

Vieri has scored 23 goals in 49 matches for Italy and played for his country at the 1998 World Cup, scoring five times, and the 2002 World Cup, scoring four times, though he endured a less successful tournament at Euro 2004, whilst he missed Euro 2000 and 2006 World Cup through injury. Vieri is generally considered to be Italy's greatest pure striker of recent times despite strong competition, and is one of Italy's most prolific World Cup goal scorers. He was named by Pelé as one of the 125 greatest living footballers[13] in March 2004.

Vieri received his first international cap during the 1996–97 season after some impressive displays for Juventus. He scored a key goal for Italy in the play off against Russia during qualification for the 1998 World Cup. At the finals of the tournament in France he formed a strong partnership with Roberto Baggio. Vieri opened the scoring against Chile after a delightful assist from his strike partner. He went on to score 3 more goals during the group stages. Vieri scored Italy's only goal in the round of 16 match against Norway. He scored Italy's fourth penalty in the quarterfinal shooutout against France but Luigi Di Biagio missed the fifth and Italy were eliminated.

Vieri missed out on Euro 2000 after suffering a recurrence of an old thigh injury, during the 4th place playoff with Parma at the end of the 1999–2000 season after a collision with Gianluigi Buffon, who would also miss out on the tournament.

Italy played Vieri as a lone striker in the 2002 World Cup, scoring four goals in four games. He managed a brace in the opening game against Ecuador and scored Italy's only goal in the 2-1 defeat to Croatia despite having a previous goal controversially ruled out for offside. In the Round of 16 match against South Korea he opened the scoring in the 18th minute, scoring a powerful header from a Francesco Totti corner. Italy led the game until the Koreans equalised 3 minutes before the end. Italy was eventually eliminated by South Korea by a golden goal.

Vieri was once again the main striker in Italy's ill fated Euro 2004 campaign. However, this time he did not fare so well, scoring no goals as Italy were eliminated in the first round. It was during this tournament that his now infamous "more of a man" press conference took place, where he hit back at his critics in the Italian press by stating that he was more of a man than any of them.

More disappointment occurred when he missed the 2006 World Cup after suffering a knee meniscus injury in a Ligue 1 match against Paris Saint-Germain on 26 March 2006.[14] Although Vieri would not necessarily have been a starter for Lippi's side, Lippi admitted that he would have picked him had he been fit. He played in three tournaments, but failed to win a medal in each of them, missing out on the Euro 2000 runners up medal and the glorious 2006 World Cup winners medal.

Christian Vieri's personal life has been subject to much media attention in Italy. He has been involved in many high profile relationships, including those with models Elisabetta Canalis, Elena Santarelli, Debora Salvalaggio, Fernanda Lessa and Melissa Satta among others.[15]

He has his own fashion label - Sweet Years[16] - which he runs with friend and former Italy and Milan team mate Paolo Maldini. The pair also own a number of restaurants in the city of Milan.