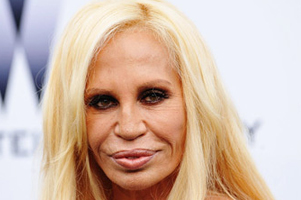 Donatella Versace (born May 2, 1955) is an affluent Italian fashion designer, like her famous brother, Gianni Versace, the founder of the Versace clothing empire.

Her current title is Vice-President of the Versace Group and Chief Designer of the fashion line. She holds a great amount of Versace stock, totalling 20% of the entire stock market assets of Versace.

Her brother, Santo Versace, owns 30%. Donatella's daughter Allegra Versace got 50% of the company stocks after Gianni Versace died, the two were very close and he testamented his half to Allegra.

Donatella Versace was born in the Italian city of Reggio di Calabria, the youngest of three children in her family, her father being a personal financier to the Italian aristocracy. In the mid 1970s, Donatella followed her 25-year older brother, Giovanni ("Gianni"), to pursue knitwear design in Florence, Italy. Donatella had planned to work for her brother as Public Relations, but she was more valuable to Gianni as a "muse and critic", according to Donatella during an interview with Vogue. Through her closeness to her brother's enterprises, Donatella plunged into the fashion world. A decade later, during the 1980s, Gianni launched a perfume dedicated to her, Blonde, and gave her her own diffusion label, Versus, which remains a well-known Versace inner line.

The growth of Donatella and Versace

Donatella is accredited as the first designer to use notable celebrities to broadcast her clothing into the world on the catwalk and other public mediums such as advertisements, instead of using unknown models. Another member of the growing Versace success was Santo Versace S.p.A., Donatella's brother, who is also a fashion designer and the owner of Finanziaria Versace, an established Versace branch. Donatella soon proved to be the public relations giant within the Versace label and spread its name throughout Europe and most of the United States. Donatella chose to place some of her good friends, Madonna, Christina Aguilera and Demi Moore, in high esteem in the Versace advertising sector, making them and other A-List celebrities the persona and image of Versace.

On July 15, 1997, outside the re-constructed Versace Mansion, also known as Casa Casaurina, in Miami, Florida, Gianni Versace was shot dead by Andrew Cunanan, a suspected serial-killer who committed suicide before apprehension was possible. Her brother's murder was not only a blow to the South Beach, Miami community but also to the fashion industry. Donatella and other family patriarchs temporarily moved the family to a secluded, private resort in the Caribbean. Consequently, the Spring-Summer 1998 Collection was cancelled as were the indirect operations of the company. The Official Funeral of Gianni Versace was held at the Roman Catholic Milan Cathedral in Milan, Italy, where over 2,000 mourners attended a traditional service, which was originally highly controversial. Notable guests in attendance were Diana Princess of Wales, Sir Elton John, Naomi Campbell, Giorgio Armani, Carolyn Bessette-Kennedy, Sting, Luciano Pavarotti, Carla Fendi, Karl Lagerfeld and many other famous fashion designers. Elton John and Sting sang a setting of Psalm 23, "The Lord is My Shepherd", broadcast to millions of viewers worldwide.

A year and three days after Gianni's death in July 1998, Donatella Versace mounted her first couture show for the Versace Atelier at the HÃ´tel Ritz Paris. She built her runway over the hotel's swimming pool, as her brother had done every season, though this time using sheer glass. She now oversees the production of a dozen collections each year, though these days, Donatella is just as famous for her celebrity entourage and glittering parties. Regular guests include Sir Elton John, Liz Hurley, Catherine Zeta-Jones and Kate Moss. Even Prince Charles attends Donatella's parties for the famous and elite throughout Europe.

Branching into other fields, the company has created the grand, luxurious Palazzo Versace resort on the Gold Coast of Australia. Another growing symbol of the Versace style, the world's tallest hotel, the Burj al-Arab in Dubai, United Arab Emirates (UAE), boasts a broad collection of Versace furniture and beddings in its expensive and lavish rooms.

Plans for the Palazzo Versace Dubai were announced in May of 2005. Gianni Versace SpA, Sunland Group Ltd. and Emirates International Holdings have announced the Palazzo Versace resort to be constructed in the Arabian Bays on the Dubai Creek in Dubai, United Arab Emirates. The second Palazzo Versace will boast a number of suites and luxury villas, including an exclusive spa. Official plans are to begin construction in 2006 and have the hotel completed sometime in the year 2008. The interior of the hotel will be furnished with various Versace collections. As Creative Director, Donatella will carry out final plans and design strategies for the hotel and resort compound. This will be the second Pallazo Versace hotel ever to be built, and the second hotel in Dubai to boast a wide range of Versace collections.

In October of 2002, Gianni and Donatella's most famously designed Versace clothing were displayed in a special exhibit of the historical Victoria and Albert Museum of London to be honored for extraordinary fashion success and symbolism worldwide.

Donatella's deceased brother, Gianni Versace, had a large collection of homes worldwide that have since been sold, most notably his Manhattan, New York double-wide townhome, estimated to be valued at over $21,000,000 USD. Donatella Versace does not permanently live in one residence, but consistently travels from one to the other.

Heiress to the throne

It was in 1997, while watching television, that Allegra Versace saw the familiar face of her uncle, Gianni, on the news stations. He had been shot. Not only was Gianni an icon of the fashion industry, he was the highest figure in the Versace Group, leaving no one to rule the vast network of clothing lines and branches of his company. His Last Will and Testament stated Allegra Versace was to receive majority inheritance and titles. After Donatella, Allegra Versace is the heiress to the remainder of the extensive Versace fortune, including vast real estate holdings worldwide.

Allegra Versace, upon her eighteenth birthday, received the primary inheritance from her beloved uncle, Gianni, the staggering sum of $700 million.

"Only you understand how I express what I feel" --Gianni to Allegra
She was not only left an enormous wealth and heritage from her uncle, Allegra was given Gianni's villa on Lake Como, Italy and a large townhome in one of Manhattan's most affluent neighborhoods. To this day she stands to inherit the company, as her brother, Daniel, inherited Gianni's vast rare artwork collection. While the Versace Group is not as financially robust as it was in its earlier and peak stages, the Versace Group has publicly made clear that Donatella and Allegra Versace will hopefully bring a new face and attraction to the Versace label.