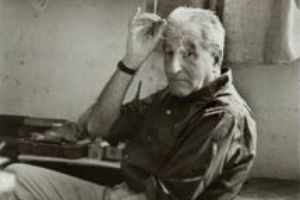 His position in Swiss art history of the 20th century is exceptional: Varlin wasn’t influenced by avantgardist and abstract movements of his time, he coined his stand-alone own figurative work, that was about the fragility of every day life.

Varlin was friends with Hugo Loetscher and Friedrich Dürrenmatt, he even painted them.

He grew up in the heart of Switzerland on the outskirts of Zurich. His early life was struck with tragedy however, when at the age of twelve his father and elder sister died within two months of each other. This began a fascination with darkness that would show in his work for the rest of his life.

In 1921, at the age of twenty-one he went to Berlin to study at the Berlin State School of Fine Arts where he was taught by Emil Orlík. Two years later he moved again, this time to Paris, where he studied at The Académie Julian Art School.

In 1926, his mother retired and he finished his studies. Suddenly aware that he needed to earn a living, he got a job as a clerk with Company Risacher in Faubourg Montmartre. He did not last very long, they reportedly said of him "he can’t even sharpen a pencil!". After this he began drawing cartoons for humourist magazines like Froufrou and Ric-rac. He also exhibited some of his work at the Salon des Humoristes.

In 1930 he was discovered by Polish poet and art dealer Leopold Zborovski, who also discovered Chaim Soutine and Amedeo Modigliani. Zborovski decided he needed to change his name because 'Guggenheim' had bourgeois connotations and he thought it would put off the more Bohemian parts of Parisian society. The name 'Varlin' was found after the street name Rue Eugène Varlin.

Zborovski rented a studio in la Ruche for Varlin, were he socialised with Archipenko, Soutine, Chagall and Léger, who also had studios there. In 1931 he exhibited at the Galerie Sloden in Faubourg St-Honoré after living briefly in the south of France. The exhibition was a great success and was extended beyond its original run.

His friend and mentor Zborovskis died in 1932 and two years later, Varlin returned to Switzerland to be with his mother and sister. He began renting a house in Venedigli which was due for demolition and had no banisters and little furniture. Here he lived with the painter Leo Leuppi, and the sculptors Louis Conne, Hans Hippele and Meinrad Marti. They lived in relative poverty but held huge parties that were famous throughout the city.

Over the next three decades Varlin exhibited across Europe in galleries including the Municipal Gallery of Bienne, the Kunstmuseum in St. Gallen and the Venice Biennale. He received a number of Swiss awards and his exhibitions were met with high praise although often controversial. He also served in the second world war but hated military life.

In 1961, Varlin was invited to exhibit at Kunsthaus Zürich, his hometown's museum. This was a great honour for the artists and The Journal DU dedicated an entire issue to his life and work. Two years later at the age of 63 he married a woman named Franca.

In the spring of 1976 a major exhibition of 59 paintings opened at the Municipal Modern Art Gallery in Milan. The following Autumn, on 30 October 1977, Varlin died at his home in Bondo, Switzerland. The same day came the news that the city of Florence had given him The Fiorino D'oro award for his lives work in the arts.