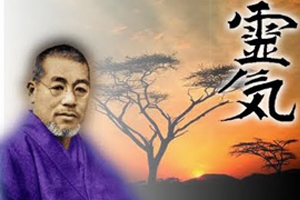 Mikao Usui (15 August 1865 – 9 March 1926, commonly Usui  Mikao in Japanese) was the founder of a form of spiritual practice known as Reiki, used as a complementary therapy for the treatment of physical, emotional, and mental diseases.

According to the inscription on his memorial stone, Usui taught Reiki to over 2000 people during his lifetime.

Sixteen of these students continued their training to reach the Shinpiden level, a level equivalent to the Western third degree, or Master level. Usui died on 9 March 1926 of a stroke.

Usui was born on 15 August 1865 in the village of Taniai (now called Miyama cho) in the Yamagata district of the Gifu Prefecture, Japan, which is now located near present day Nagoya.

An 18th century scholar, Mikao Usui earned his doctorate of theology at the University of Chicago, in the theological seminary. (The Reiki handbook, copyright 1982, second edition 1985, by Larry E. Arnold and Sandra Nevius all rights reserved. PSI press 1025 Miller Lane Harrisburg, PA 17110-2899.) A good read for those seeking the truth of Reike.

Shugend? is a Japanese mountain ascetic shamanism, which incorporates Shinto and Buddhist practices. Roles of Shugend? practitioners include offering religious services such as fortune telling, divination, channelling, prayer, ritual incantations and exorcism. Shugenja was often used by family clans to heal disease or to avoid misfortune.

Usui's father's common name was Uzaemon, and his mother was from the Kawai family. His brothers, Sanya and Kuniji, grew up to become a doctor and a policeman respectively.

He also had an older sister called Tsuru. Usui married Sadako Suzuki, who bore children by the names of Fuji and Toshiko. Fuji (1908–1946) went on to teach at Tokyo University, and Toshiko lived a short life, dying at the age of 22 in 1935. The entire family's ashes are buried at the grave site at the Saih?-ji Temple in Tokyo.

As an adult, he traveled to several Western countries, including Americas, Europe, and China as a part of his continued lifelong study. His studies included history, medicine, Buddhism, Christianity, psychology, and Taoism.

Usui's ancestors were the once influential Chiba clan and were Hatamoto samurai. According to the inscription on his memorial, Tsunetane Chiba, a military commander during the end of the Heian period and the start of the Kamakura period (1180–1230), was one of Usui's ancestors.

In 1551, Toshitane Chiba conquered the city Usui and thereafter all family members acquired that name. Usui was raised as a samurai from childhood, specifically in the martial arts techniques of aiki.

It is believed that the aim of Usui's teachings was to provide a method for students to achieve a miracle. What sets Usui's teachings apart from other hands-on healing methods is his use of reiju or attunement to remind students of their spiritual connection. It seems that all students of Usui received 5 precepts and those with a further interest in the teachings became dedicated students. There does not appear to have been a distinction between clients and students in the beginning though this may have changed at some point. People began coming to Usui Mikao possibly for different purposes – some for healing and others for the spiritual teachings.

During the early 1920s, Usui did a 21-day practice on Mount Kurama-yama called discipline of prayer and fasting, (according to translator Hyakuten Inamoto. Common belief dictates that it was during these 21 days that Usui developed Reiki. As Mount Hiei is the main Tendai complex in Japan, and is very close to Kyoto, it has been surmised that Usui would also have practiced there if he had been a lay priest. This teaching included self-discipline, fasting and prayer.

“In April of the 11th year of Taisho (1922 A.D.) he settled in Harajuku, Aoyama, Tokyo and set up the Gakkai to teach Reiki Ryoho and give treatments. Even outside of the building it was full of pairs of shoes of the visitors who had come from far and near.” –

“In September of the 12th year (1923 A.D.) there was a great earthquake and a conflagration broke out. Everywhere there were groans of pains from the wounded. Sensei, feeling pity for them, went out every morning to go around the town, and he cured and saved an innumerable number of people.