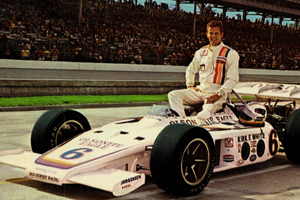 Robert William "Bobby" Unser (born February 20, 1934 in Colorado Springs, Colorado) is a retired U.S. automobile racer. He is the brother of Al Unser, Jerry Unser and Louie Unser, the father of Robby Unser, and the uncle of Al Unser, Jr. and Johnny Unser. He is one of nine drivers to win the Indianapolis 500 three times, and one of only two to have won the 500 in three different decades (1968, 75, 81). Bobby has also been a spokesman and advocate of many commercial products.

Bobby was part of one of the most controversial finishes in Indy 500 history at the 1981 Indianapolis 500. On lap 149, during a caution period, Bobby and Mario Andretti made their pit stop and headed back to the race. Bobby passed eight cars during the caution, while Mario passed two cars. Unser won the race, but was stripped of it the following morning in favor of second place finisher Mario Andretti. Unser was awarded the win in October 1981, but the controversy and financial impact (Unser once estimated that the commercial endorsements he lost because of the delayed result cost him $1 million) caused him to retire from racing at the end of the year.

Was the first driver to average more than 190 MPH at the Indianapolis 500.

Won the USAC Indy car championships in 1968 and 1974. He was also entered in the 1968 United States Grand Prix at Watkins Glen International, driving for the BRM team. He withdrew after a massive accident in practice.

Challenged Dan Gurney to improve the performance of his 1971 USAC car, leading to the development of the Gurney flap.

Drove in three NASCAR Grand National races from 1969 to 1973 with a best finish of fourth.

Is the undisputed king of the Pikes Peak International Hill Climb with 13 wins.

He was a color commentator for Indycar races after his retirement.

He was inducted into the International Motorsports Hall of Fame in 1990.

He was inducted in the National Sprint Car Hall of Fame in 1997.

Unser was inducted in the Motorsports Hall of Fame of America in 1994.

In 20 December 1996 in Colorado, Unser and a friend became lost while snowmobiling near Unser's New Mexico ranch. They abandoned one stuck snowmobile before a storm blinded them both. When the second snowmobile stopped working, they spent two days and nights in subzero weather before finding a barn where they were found. Both men were suffering badly, and Mr Unser had vomited blood during this time.

Mr Unser was later convicted of a Federal misdemeanor, "unlawful operation of a snowmobile within a National Forest Wilderness Area" (16 U.S.C. 551, 36 C.F.R. 261.16(a)), and was fined $75. Maximum penalties could have been up to six months in jail and up to $5,000.00 in fines. Unser appealed it, claiming to have been lost before the accident, but the court ruled that maps were widely available and it was a public welfare offense, thus intent was not necessary. Mr Unser appealed this decision all the way to the U.S. Supreme Court, but his writ of certiorari was denied.