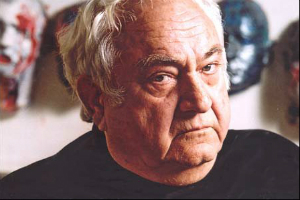 Yigal Tumarkin (born 1933) is an Israeli painter and sculptor.

Peter Martin Gregor Heinrich Hellberg (later Yigal Tumarkin) was born in Dresden, Germany. His father, Martin Hellberg, was a German theater actor and director. His mother, Berta Gurevitch and his stepfather, Herzl Tumarkin, immigrated to Mandate Palestine when he was two. Tumarkin served in the Israeli Sea Corps. After completing his military service, he studied sculpture in Ein Hod, a village of artists near Mount Carmel. Es padre de Yon Tumarkin

Tumarkin is famous for the memorial sculpture of the Holocaust in the central square of Tel Aviv (Rabin Square), and for some sculptures situated in the Negev.

Tumarkin is also a theoretician and stage designer. The 1950s found Tumarkin in East Berlin, Amsterdam, and Paris. Upon his return to Israel in 1961, he became a driving force behind the break from the charismatic monopoly of lyric abstraction there. Tumarkin created assemblages of found objects, generally with violent Expressionist undertones and decidedly unlyrical color. His determination to "be different" influenced his younger Israeli colleagues. The furor generated around Tumarkin's works, such as the old pair of trousers stuck to one of his pictures, intensified the mystique surrounding him.