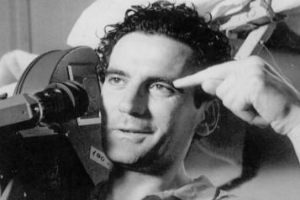 Italian actor and film director whose film "Il Postino" (The Postman) won five Oscar nominations including that of Best Picture, and he, the nomination as Best Actor. With a bad heart, he had been told to protect his health or make his movie and he chose the latter. The film wrapped on 6/03/1994 and he died less than 24 hours after completion.

He was born the fifth of six kids with a dad who was a railroad stationmaster and a mom who was a housewife. At ten, he had rheumatic fever and had to be careful of exertion. At 23, he had to have a heart valve replaced.

As a youth, he turned to acting. His film debut "Back to Square Three" was a hit in Italy in 1981 and he made ten more comedies in the next decade. One of Italy's top film comedians, he always played a dumb little hapless guy. Off screen, he was a gentleman with a great sense of humor. Unmarried, he had several grand romances.

In 1992 he bought the movie rights to the book "Il Postino." He was told in 1993 that he needed a heart transplant. He put it off, saying that film was his life. This film was his death. Scheduled to fly to London three days after the wrap, he had, instead, his funeral.