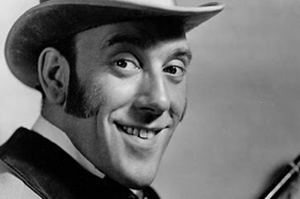 Thomas Edward Trinder CBE ( 24 March 1909 – 10 July 1989) known as Tommy Trinder, was an English stage, screen and radio comedian of the pre and post war years whose catchphrase was 'You lucky people'.

Born at 54 Wellfield Road, Streatham, South London, (a plaque from the Streatham Society marks the spot) on 24 March 1909, the son of Thomas Henry Trinder, a London tram driver from Shilton, Oxfordshire, by his wife Jennie Georgina Harriet Mills, Tommy Trinder was one of the best-loved comedians in Britain during the period from the late 1930s until the 1960s.

He was fast-talking and quick-witted and well-suited to stand up comedy in front of a live audience. His catch phrases, 'You lucky people!' and 'If it's laughter you're after, Trinder's the name', combined with his trademarks; the trilby hat, the leering smile and the wagging finger were almost universally recognised in Britain.

He left school early for a job as an errand boy but by the age of 12 was on stage. He toured South Africa with a revue company in 1921 and appeared as a boy vocalist at Collins' Music Hall the following year. Minor successes in music hall, revues and working men's clubs followed.

By 1926, aged 17, Trinder was the star of Archie Pitt's travelling variety comedy shows.

National recognition began to come in 1937 with the revues Tune In and In Town Tonight. By World War II he was one of Britain's foremost entertainers and his shows brought welcome relief during the darkest days of the war.

Trinder with Jean Colin during the making of Communal Kitchen: Eating Out With Tommy Trinder for the Ministry of Information in 1941.

Ealing Studios signed him up to films during the war. His most famous was the comedy Sailors Three in which he, Claude Hulbert and Michael Wilding capture a German pocket battleship.

He also took straight acting parts in The Foreman Went to France, The Bells Go Down (a tribute to the work done by firemen in London during the Blitz); and Bitter Springs about a family fighting to make a new life in the Australian Outback.

He is believed to have originated "Trinder's Impossibility"[citation needed] - a "bar bet" where the mark is presented with a ten shilling note, partly torn through in two places at right angles to the long side and challenged to hold the two corners of the torn edge and tear it into three pieces. It cannot be done.

After the war, as a national figure he was soon recruited to television. In 1955, he became the first compere for the new ITV television programme Sunday Night at the London Palladium.

"He would begin his act with, 'The name's Trinder. That's T-R-I-N-D-E-R, pronounced Chumley.' This witticism was a gentle dig at the snobs of society, who insisted on pronouncing ordinary names in a fancy way which was utterly un-phonetic."

He lived in an Art Deco-style apartment block – Du Cane Court, in Balham, south-west London – the largest such under one roof in Europe in the 1930s. He moved in with Violet Trinder (nee Bailey; they had married in 1932) in 1939, and was still there in 1955. Residents remember him, and one has described an impromptu encounter she had with him in which her silk scarf had covered her features. He said: "One should never hide a pretty face." His second marriage was to Gwyn (Toni) Lancelyn Green.

He was a lifelong devoted supporter of Fulham Football Club and was chairman of the club between 1959 and 1976. During that time he hired and fired Bobby Robson

In 1979 he appeared in an edition of The Old Boy Network, doing his stand-up routine and presenting a condensed history of his life and career.

Using a wheelchair after a stroke in 1986, he made his final television appearance in I Like The Girls Who Do recalling his contemporary Max Miller.

A biography by Patrick Newley, You Lucky People! - The Tommy Trinder Story, was published in 2008.