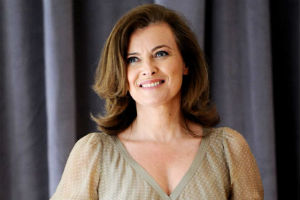 Valérie Trierweiler  (born 16 February 1965) is a French political journalist. She is the partner of François Hollande, the 24th President of the French Republic. and the first lady of France

Massonneau was born in Angers, the fifth child of six. Her father, Jean-Noël Massonneau, lost a leg on a landmine during World War II when he was 13, and died at the age of 53, when his daughter was 21. Her grandfather and great-grandfather owned the bank Massonneau & Co., which was sold in 1950 to the French bank Crédit de l'Ouest. Her mother worked at the front desk of the Angers ice rink following the death of her father.

In 2012, she announced that she would keep her contract as a journalist with the magazine Paris Match despite her partner being elected French President.

On 12 June 2012, she caused a considerable controversy by sending a tweet to express her support for Olivier Falorni, who was standing for election as a dissident socialist candidate at La Rochelle, against Ségolène Royal, the former partner of François Hollande, who had already made public his support for her campaign.

Her first marriage to a childhood friend named Franck ended in divorce with no children. Her second marriage was to Denis Trierweiler, a sub-editor at Paris Match magazine, and a writer and academic. This marriage produced three children and divorce proceedings took three years (2007-2010).

She met François Hollande during the parliamentary elections of 1988 while he was living with Ségolène Royal. They began their relationship in 2005 when she was still a married woman and made it public in October 2010 after the divorce was declared.

On 20 October 2011, she filed a claim against X (a person or persons unknown) in the Paris courts, for the illegal collecting and processing of personal information about her, when the weekly L'Express published an article stating that she was the subject of an undisclosed investigation into her past and her circle led by the intelligence branch of the Paris police. A subsequent investigation concluded that the file on her was a forgery, and the case was closed without any further action. The police department responsible for investigating crimes against individuals has, however, been asked to investigate further.