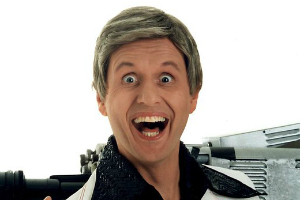 He first came to prominence in the cabaret duo Globos with Wendy De Waal, and they scored two Australian Top 20 hits with quirky covers of "Tintarella de Luna" (1982) and Sonny & Cher's "The Beat Goes On" (1983), both of which were produced by Red Symons.

In 1984 he formed a comedy duo in with Cathy Armstrong, in which his flamboyant alter ego Bob Downe was born. "Bob Downe" is a cheesy, safari-suit-wearing lounge singer with dazzling teeth, and host of the fictional regional daytime TV show Good Morning Murwillumbah. The distinction between the two personae is often blurred: Trevorrow and the "Prince of Polyester" both appear at events and host television programs.

In January 1987 Mark went solo with the character at Sydney's Harold Park Hotel. In 1988 he took Bob to the Edinburgh Festival Fringe, where he was a huge and instant success. Bob Downe played throughout the 1990s to ever larger British audiences, with Mark in perpetual commute between London and Sydney, touring nationally in both countries. With a multitude of UK TV credits under his beige belt, Bob made his twelfth Edinburgh Fringe appearance in 2002.

Back in Australia, the first Bob Downe album, Greatest Hits, was released in Australia in 1996, with 1997's Jazzy! nominated for a Best Comedy Album ARIA music award. 1998 saw the Australian publication of his first book, All Bob Downe! (Penguin) and he hosted the Sydney Gay & Lesbian Mardi Gras Parade broadcast for Network Ten. In 1999 and 2000, Bob again hosted the Mardi Gras Parade, a consistent ratings winner for Network Ten, and also won won Cabaret Artiste of the Year at the Green Room Awards in Melbourne. He released his third album, Huge Hits, in 2001. Bob's comedy/chat series, The Bob Downe Show (Foxtel/TV1), went to air in December 2000. Bob Downe's last three national theatre tours, Million Sellers (1999), Whiter! Brighter! (2000) and Cold August Night (2002) have been sellouts everywhere, including the Sydney Opera House and the State Theatre.

In 2001, Trevorrow made his first appearance as himself rather than his alter-ego, opening a new show at the Black Cat cabaret in Melbourne. The show also appeared at the Sydney Opera House Studio in 2003, followed by a studio album It's About Time in 2004 (ABC Music/Universal). Trevorrow has appeared on the Australian series of Good News Week, often joining with host Paul McDermott in a sing-along of an Australian song at the end of the episode. He has collaborated several times with the Doug Anthony All Stars (which included McDermott), appearing in their TV series, DAAS Kapital, and their film The Edinburgh Years. He has also featured in episodes of the sitcom Kath & Kim, as well as hosting the series The Way We Were, and has appeared in the animated Australian/Canadian sitcome, Quads, as the voice of Spalding (SBS 2002). Trevorrow is a regular fill-in presenter on the Evening Show on 702 ABC Sydney. He has also been a contestant on the special Australia's Brainiest Comedian.

Trevorrow was raised in the Melbourne suburb of Murrumbeena, the third son of a builder-turned-teacher and his wife. He has a younger sister and two older brothers. He came out to his family as gay at the age of 13.