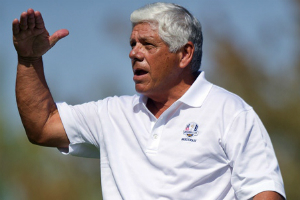 Mexican-American professional golfer. Although he never had a professional lesson, he was named PGA Player of the Year 1971 and was the first golfer to win the U.S. Open, the British Open and the Canadian Open in the same year, 1971. He was awarded the Hickok Professional Athlete of the Year award and the Vardon Trophy for lowest scoring average.

An illegitimate child, Trevino has two sisters. Living in a small shack outside of Dallas, TX with his mother Juanita and grandfather Joe Trevino, a gravedigger, he never knew who his father was and doesn’t care to find out. At five years he was picking cotton and retrieving golf balls and selling them. Trevino caddied by age eight, quitting school at age 14. He didn’t play a full round of golf until 15 years of age. Lee joined the Marines and their golf team, became a professional golfer in 1960, won his first tournament in 1964 and joined the pro tour in 1967.

In 1982 he became a commentator for NBC because he thought he wouldn’t be able to play again due to a back injury. He joined the senior tour in 1989 duplicating his 27 regular major wins by 1998 and winning again in 1999 giving him a total of 55 wins thus far in his career.

He now owns Lee Trevino Enterprises, Inc. which designs golf courses and sells leisure wear. The first Latino to become a major golfer, he is known as "Super Mex" and "Buck". He believes in setting high goals and working hard to achieve them. His hobby is fishing. There have been two book about him written for children, "Lee Trevino," (Hispanics of Achievement Services) by Thomas Gilbert and "Lee Trevino, Overcoming the Odds," by Kramer.

In the early 1980’s Trevino was struck by lightning and required back surgery in 1983. He had scar tissue putting pressure on nerves due to this operation and a microwave procedure with needles burned the nerves and relieved the pain. He is 5’7" and weighs about 180 pounds.