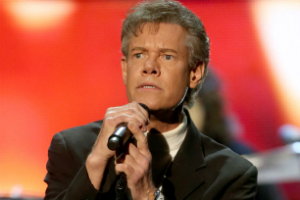 American country western singer who has been accredited every award in his field. He signed with Warner in February 1985 and shot to the top of the charts in a brief time. His first three albums sold over 8 million copies in the U.S. alone and his awards include two Grammy's, seven American Music Awards, five Nashville network Viewer Choice Awards, seven Academy of Country Music Awards and five Country Music Associations Awards.

Travis and his older brother were weaned on the music of country greats. Singing and playing guitar by the time he was eight, he began performing at VFW halls and church socials while still in grade school. "My folks pushed me to do it," he said.

A hell raiser from the age of 14, he dropped out of school to help in his dad's construction business and work in the turkey farm. He got into drinking and drugs and was on his own by the time he was 16. Singing in "unsavory clubs" at 15, he was discovered at age 17 by Lib Hatcher and turning both of their lives around, she sold her club, divorced her husband and they both attacked Nashville with a storm.

Travis signed with Warner February 1985 and his singles hit the top-ten within a year.

His “Glory Train” won him another Grammy in the category of Best Southern, Country, Or Bluegrass Gospel Album.