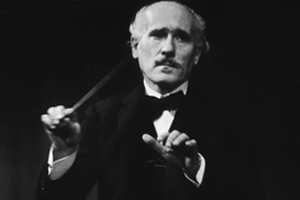 Italian conductor, revered by many as the greatest conductor of his time during a career that spanned 70 years. Considered without peer in the symphonic interpretations of Beethoven and Brahms, Toscanini is also credited with restoring proper style to Italian opera, particularly those of Verdi.

He was a cellist at age nine and, not long out of school, was hired as first cellist and assistant chorus master by the impresario Claudio Rossi, who was organizing an opera tour of Brazil. Though only 19, Toscanini was forced to lead the performance of "Aida," following the expulsion of the original conductor, and won over an unruly audience prone to jeering. So he began his career as conductor of the Rio de Janeiro opera in 1886.

His last concert was 4/04/1954, when he faltered during a live radio broadcast of an all-Wagner program with the NBC Symphony Orchestra in Carnegie Hall. NBC quickly took the program off the air. Toscanini momentarily recovered, and NBC turned the microphones on again, but then started to leave the podium without completing the piece. He never conducted again.

After a New Year’s party in 1957, Toscanini suffered a hemorrhage, then several more over the next week. He came out of a coma on 1/15/1957 to sing a snatch from Verdi’s "Aida," the opera that had made his name when he had conducted it from memory. The next morning, he was dead.