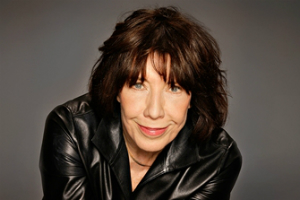 She started out as a med student at Wayne State University, dropping out to do cabaret as a local performer. By 1966, she relocated to New York doing coffee house comedy, commercials and appearing regularly on the "Garry Moore Show."

After that show folded, she went back to cabaret for nearly three years and joined the cast of "Laugh-In" in 12/1969. Her popularity grew with the character impersonations of "Ernestine" and "Edith Ann," which established her as a masterful entertainer, able to disappear into her character at a moment's notice.

She moved on to her own Emmy Award winning TV specials and two Tony awards, releasing several hit records and being voted best supporting actress by New York Film Critics for her portrayal in "Nashville."

Tomlin started working at the age of 14 in a dime-store to supplement the family income. She and her writer companion, Jane Wagner, four years older, have been together for over 20 years (as of 1996) and have gone through the ups and downs of extreme financial changes. Together they lost $5 million in bad stock market moves. They sued their former brokers and were counter-sued.

Tomlin began a role as a regular on the popular "Murphy Brown" sitcom series in 1996 until its finale in 1998.