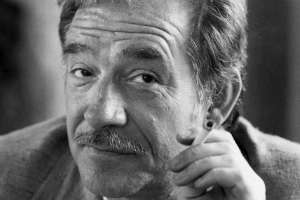 Tognazzi was born in Cremona, in northern Italy but spent his youth in various localities as his father was a traveller clerk for an insurance company.

After his return to his native city in 1936, he worked in a salami production plant. During World War II, he was inducted into the Army and returned home after the Armistice of September 1943. His passion for theater and acting dates from his early years, and also during the conflict he organized shows for his fellow soldiers. In 1945, he moved to Milan, where he was enrolled in the theatrical company led by Wanda Osiris. A few years later, he formed his own successful musical revue company.

In 1950, Tognazzi made his cinematic debut in I cadetti di Guascogna directed by Mario Mattoli. The following year, he met Raimondo Vianello, with whom he formed a successful comedy duo for the new-born RAI TV (1954–1960). Their shows, sometimes containing satirical material, were among the first to be censored on Italian television.

He was a well-known actor in Italy, and starred in several important international films, which brought him fame in other parts of the world.

Roger Vadim cast Tognazzi as Mark Hand, the Catchman, in Barbarella (1968). He rescues Barbarella (Jane Fonda) from the biting dolls she encounters, and after her rescue, he requests payment by asking her to make love with him (the "old-fashioned" way, not the psycho-cardiopathic way of their future).

In 1981, he won the Best Male Actor Award at the Cannes Film Festival for La tragedia di un uomo ridicolo, directed by Bernardo Bertolucci. While he worked primarily in Italian cinema, Tognazzi is perhaps best remembered for his role as Renato Baldi, the gay owner of a St. Tropez nightclub, in the 1978 French comedy La Cage aux Folles which became the highest grossing foreign film ever released in the U.S.

Ugo Tognazzi died of a brain hemorrhage in Rome in 1990, although rumors persist to this day that his chronic depression led to suicide. He is buried in the cemetery of Velletri.