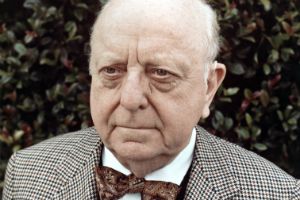 Virgil Thomson (November 25, 1896 – September 30, 1989) was an American composer and critic. He was instrumental in the development of the "American Sound" in classical music. He has been described as a modernist, a neoclassicist, a composer of "an Olympian blend of humanity and detachment" whose "expressive voice was always carefully muted" until his late opera Lord Byron which, in contrast to all his previous work, exhibited an emotional content that rises to "moments of real passion", and a neoromantic.

Virgil Thomson was born in Kansas City, Missouri. He displayed an extraordinary intelligence at an early age.[citation needed] As a child, he befriended Alice Smith, great-granddaughter of Joseph Smith, founder of the Mormon faith. After World War I, he entered Harvard University thanks to a loan from Dr. Fred M. Smith, the president of the Reorganized Church of Jesus Christ of Latter Day Saints, and father of Alice Smith. His tours of Europe with the Harvard Glee Club helped nurture his desire to return there. At Harvard, Thomson focused his studies on the piano work of Erik Satie. He studied in Paris on fellowship for a year, and after graduating, lived in Paris from 1925–1940. In Paris he forged relationships with such prominent cultural figures as James Joyce, Ernest Hemingway, E. E. Cummings, Aaron Copland, Ezra Pound, Igor Stravinsky, Pablo Picasso, Orson Welles, Jean Cocteau, and Gertrude Stein. He eventually studied with Nadia Boulanger and became a fixture of "Paris in the twenties." His most important friend from this period was Gertrude Stein, who was an artistic collaborator and mentor to him. Following the publication of his book The State of Music he established himself in New York City as a peer of Aaron Copland and was also a music critic for the New York Herald-Tribune from 1940 through 1954. His writings on music, and his reviews of performances in particular, are noted for their wit and their independent judgments. His definition of music was famously "that which musicians do," and his views on music are radical in their insistence on reducing the rarefied aesthetics of music to market activity. He even went so far as to claim that the style a piece was written in could be most effectively understood as a consequence of its income source.

In the 1930s, he worked as a theater and film composer. His most famous works for theater are two operas with libretti by Gertrude Stein, Four Saints in Three Acts, especially famous for its use of an all-black cast, and The Mother of Us All, as well as incidental music for Orson Welles' Depression-era production of Macbeth, set in the Caribbean, known as Voodoo Macbeth. He collaborated closely with "Chick" Austin of Hartford's Wadsworth Atheneum in these early productions. The government of France made him a Chevalier de la Légion d'honneur in 1947.

His first film commission was The Plow That Broke the Plains, sponsored by the United States Resettlement Administration, which also sponsored the film The River with music by Thomson. He won the Pulitzer Prize for Music in 1949 with his film score for Louisiana Story.

In addition, Thomson was famous for his revival of the rare technique of composing "musical portraits" of living subjects, often spending hours in a room with them before rushing off to finish the piece on his own. Many subjects reported feeling that the pieces did capture something unique about their identities even though nearly all of the portraits were absent of any clearly representational content.

Later in life, Thomson became a sort of mentor and father figure to a new generation of American tonal composers such as Ned Rorem, Paul Bowles and Leonard Bernstein, a circle united as much by their shared homosexuality as by their similar compositional sensibilities. Women composers were not part of that circle, and some have suggested that, as a critic, he pointedly ignored their works, or adopted a patronizing tone.

Thomson's score for The River was used in the 1983 ABC made-for-television movie The Day After.

Virgil Thomson's personal papers are in a repository at the Archival Papers in the Music Library of Yale University and also additional effects regarding Thomson are included in the Ian Hornak repository at the Smithsonian Institution's Archives of American Art in Washington D.C.

He was a recipient of Yale University's Sanford Medal.

In 1988, he was awarded the National Medal of Arts.

He was a National Patron of Delta Omicron, an international professional music fraternity.

He died on September 30, 1989, in his suite at the Hotel Chelsea in Manhattan.