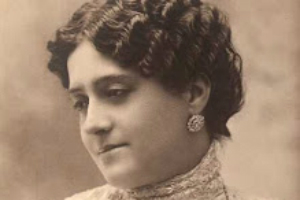 Tetrazzini's voice was remarkable for its phenomenal flexibility, thrust, steadiness and thrilling tone. She enjoyed a highly successful operatic and concert career in Europe and America from the 1890s through to the 1920s, but her final years were marred by poverty and ill health.

Tetrazzini was born in Florence, the daughter of a military tailor. Reportedly, she began singing at the age of three. Her first voice teacher was her elder sister, Eva Tetrazzini (1862–1938), who also was a successful singer. Tetrazzini later studied at the Istituto Musicale in Florence. According to The Concise Oxford Dictionary of Opera (second edition, 1980), she made her operatic debut in Florence in 1890. The role was Inez in Meyerbeer's L'Africaine, taken when the scheduled soprano canceled on short notice. The first part of her career was spent mainly in the Italian provincial theaters and touring in Russia (she performed to considerable acclaim in Saint Petersburg), Spain and South America. Her 1890s' repertory consisted primarily of lyric-coloratura parts such as Violetta, Philine, Oscar, Gilda and Lucia. Tetrazzini made her American debut in San Francisco in 1905. The Metropolitan Opera's general manager, Heinrich Conried, took an option on her services at that time but unaccountably failed to engage her. After great success, she went on to New York where she was a sensation, eventually working under contract to Oscar Hammerstein.

After some legal difficulties in New York that blocked her from performing, she held a press conference and declared, "I will sing in San Francisco if I have to sing there in the streets, for I know the streets of San Francisco are free." This line became famous. She won her legal case, and her agent announced she would sing in the streets of San Francisco. On a crystal clear Christmas Eve in 1910, at the corner of Market and Kearney near Lotta's Fountain, Tetrazzini climbed a stage platform in a sparkling white gown, surrounded by a throng of an estimated two to three-hundred thousand San Franciscans, and serenaded the city she loved.

In 1907 Tetrazzini made a sensational debut as Violetta in La traviata at Covent Garden in London, where she was completely unknown, and from that point on she was an international operatic superstar, commanding the highest fees and selling out opera houses and concert halls wherever she performed. In 1908, Tetrazzini finally appeared in New York, not at the Metropolitan, but at Oscar Hammerstein's Manhattan Opera Company, again as Violetta and again with great success. She remained loyal to Hammerstein and appeared at the Met for only one season, in 1911-12 (giving just eight performances, in the roles of Lucia, Violetta, and Gilda). From 1911 to 1914 she sang with the Boston Opera Company and Chicago Grand Opera Company. At Boston, the Australian soprano Evelyn Scotney deputised for her in Lucia di Lammermoor, and the critics considered her "even better than Tetrazzini", an indication of the esteem in which Tetrazzini's name was held.

Tetrazzini possessed an extraordinary vocal technique that enabled her to surmount any vocal challenge with almost insolent ease. She had complete mastery of runs, trills, staccati and vocal ornaments of all kinds. She also had a brilliant upper register, extending to F above high C. Unlike many other coloratura sopranos, such as Amelita Galli-Curci, Tetrazzini's high notes were not thin and delicate, but full, powerful and ringing. On the debit side of the ledger, her vocal registers were not as well-integrated as those belonging to her direct soprano rival, Nellie Melba. Also, although her lower register was strong, her middle voice was comparatively 'white' in tone, with a quality which some American and English critics described as "infantile". The Irish tenor John McCormack even compared it, using hyperbole, to "the wailing of a cross infant". With age, however, Tetrazzini's middle register filled out to some extent; and the way that her mid-voice sounded, even when she was younger, does not seem to have troubled the ears of Mediterranean critics, going by their written record.

Tetrazzini was short and grew stout as she aged; but she could act effectively on stage, especially in lively or comic roles. She was a good musician, too, and the possessor of a zestful, vivacious personality. These extra-vocal qualities come through on the many records which she made. She recorded extensively for Victor and HMV. Her best recordings include a spectacular rendition of "Io son Titania" from Ambroise Thomas' Mignon and "Saper vorreste" from Verdi's Un ballo in maschera, in which Tetrazzini's personality virtually jumps out of the grooves at the listener. On a different note, her recording of "Addio del passato" from La traviata is very moving and also demonstrates her fine legato, as is her "Ah non credea mirarti" from La sonnambula. Her "Una voce poco fa," and "Ah non giunge," made for the Victor label, remain, after all these years, unequalled for their sheer joy, easy virtuosity and spectacular ornamentation.

Tetrazzini had a bitter feud with Nellie Melba at Covent Garden but was generally well liked by other colleagues, including Enrico Caruso and Frieda Hempel. Adelina Patti, the premiere soprano of an earlier generation, and not known for generosity towards other singers, was a fan of Tetrazzini's singing, and made it a point to attend and loudly applaud the younger soprano's performances.

After World War I, Tetrazzini largely abandoned the opera stage for the concert platform. She was less fortunate in her marriages (three of them) than in her career, and her third husband dissipated the considerable fortune she had amassed, forcing her to continue to give concerts long after her voice had gone. Her last years were spent in financial difficulty and physical decline. However, the soprano remained cheerful and lovable, despite her reduced circumstances. She would often say, "I am old, I am fat, but I am still Tetrazzini." In 1932, when she was retiring, she was filmed listening to a recording of Caruso's rendition of "M'appari, Tutt'Amor," and began to sing along with the record showing that her voice still had plenty of power (this video can been seen from the link below under the External Links section). Tetrazzini died in Milan on April 28, 1940. The state paid for her funeral.

Luisa is thought to be eponymous of the popular American dish Turkey Tetrazzini, which allegedly originated in San Francisco, where she resided for years. She also featured in E. M. Forster's first novel 'Where Angels Fear to Tread' as a perspiring Italian lady who insists on keeping the windows open in a train, causing one of the characters to get a smut in her eye. She then turns up as Lucia di Lammermoor on the stage in the Monteriano Opera House. The incidents apparently happened to Forster and his mother while they were making the trip that inspired the book.

Additionally, there is a reference to Tetrazzini in the 1916 song "When Priscilla Tries to Reach High C", written by Harry von Tilzer.

Lyrics mentioning her name ('My figure's just like Tetrazzini'.) appear in the song "Art is Calling For Me" (The Prima Donna Song) from The Enchantress by Victor Herbert.

A 1969 episode of Filmation's The Adventures of Batman titled "Opera Buffa" has Robin(or Dick Grayson) referring to the 'Tetrazzini Tiera', a nod to Luisa Tetrazzini. This particular episode devoted to the Joker stealing a famous tiera in the opera world. This was the last episode in Filmation's 60s animated Batman series.