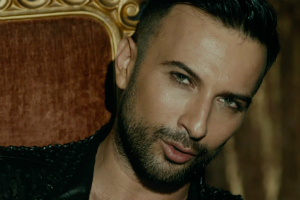 Turkish singer-songwriter, known as "Megastar" and "Prince of the Bosporus," whose successful album sales have made him a prominent figure of Turkish pop music in both Turkey and Europe since the early 1990s. He is one of a few European singers who has managed to achieve chart success without singing in English. His albums have sold over 15 million copies, and he has won four Turkey Music Awards, six Golden Butterfly Awards and one World Music Award.

Tarkan released his debut album Yine Sensiz in late 1992 with "Kıl Oldum" being chosen as its lead single. His second and third albums, Aacayipsin and Ölürüm Sana, were released in 1994 and 1998 respectively. The song "Şımarık" from Ölürüm Sana became popular in a number of countries. In 1998, he signed a new contract with Universal Music Group. In 1999, his compilation album, Tarkan, received platinum and gold certifications in several countries.

In 2006, with the release of his first English album, Come Closer, he became known in Europe. "Bounce" and "Start the Fire" were the lead singles of this album. In 2010, his seventh studio album, Adımı Kalbine Yaz, became the best-selling album of the year in Turkey.

Tarkan was born on the same day as American rapper Eminem.