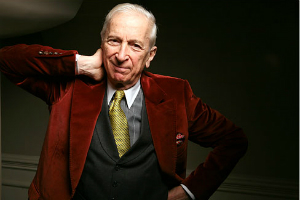 Gay Talese (born February 7, 1932) is an American author. As a writer for The New York Times and Esquire magazine in the 1960s, he helped to define literary journalism. His most famous articles are about Joe DiMaggio and Frank Sinatra.

Talese is a visiting writer at the Master of Professional Writing Program at the University of Southern California each spring.

Gay Talese was born into a Roman Catholic Italian-American family in Ocean City, New Jersey, located just south of Atlantic City. His father, Joseph Talese, was a tailor who had immigrated to the United States in 1922 from Maida, a town in the province of Catanzaro in southern Italy. His mother, the former Catherine DePaolo, was a buyer for a Brooklyn department store (he is sometimes erroneously identified as being from Brooklyn).

At school as a child, he wore hand crafted suits from his father's shop which, he later reflected in his memoir Origins of a Nonfiction Writer (1996), caused him to appear to be older than his classmates. He recounted his early years in his book Unto the Sons.

Talese has been married to another writer, Nan Talese (a New York editor who runs the Nan A. Talese/Doubleday imprint) for over 50 years. Gay and Nan Talese's marriage will be the subject of Talese's next book, the third in a series published by Knopf. The first two books, Unto the Sons and A Writer's Life, were published in 1992 and 2006, respectively.

Origins of a writer

Talese's entry into writing was entirely happenstance and the unintended consequence of the then high school sophomore's attempt to gain more playing time on the baseball team. The assistant coach had the duty of calling in the chronicle of each game to the local newspaper and when he complained he was too busy to take care of it, the head coach turned to Talese to take over the duties. As he recalls in Origins,

"On the mistaken assumption that relieving the athletic department of its press duties would gain me the gratitude of the coach and get me more playing time, I took the job and even embellished it by using my typing skills to compose my own account of the games rather than merely relaying the information to the newspapers by telephone."

Talese was soon (after only seven sports articles) given the job of covering not only the goings-on at the school, but also given his own column for the weekly Ocean City Sentinel-Ledger. By the time he left for college in September 1949, Talese had written some 311 stories and columns for the Sentinel-Ledger.

Talese credits his mother as the role model he followed in developing the interviewing techniques that would serve him so well later in life interviewing such varied subjects as mafia members and middle-class Americans on their sexual habits. He relates in A Writer's Life:

"I learned from my mother ... to listen with patience and care, and never to interrupt even when people were having great difficulty in explaining themselves, for during such halting and imprecise moments ... people are very revealing—what they hesitate to talk about can tell much about them. Their pauses, their evasions, their sudden shifts in subject matter are likely indicators of what embarrasses them, or irritates them, or what they regard as too private or imprudent to be disclosed to another person at that particular time. However, I have also overheard many people discussing candidly with my mother what they had earlier avoided—a reaction that I think had less to do with her inquiring nature or sensitively posed questions than with their gradual acceptance of her as a trustworthy individual in whom they could confide."

Talese was rejected by dozens of colleges in New Jersey and nearby states. He eventually was accepted at the University of Alabama, where his selection of a major was, as he described it, a moot choice. "I chose journalism as my college major because that is what I knew," he recalls, "but I really became a student of history". At the university Gay Talese became a brother of Phi Sigma Kappa

It was here that he would begin to employ literary devices more well known in fiction, like establishing the "scene" with minute details and beginning articles in medias res (Latin for "in the midst of things"). In his junior year, he became the sports editor for the campus newspaper, Crimson-White, and started a column he dubbed "Sports Gay-zing", for which he wrote on November 7, 1951):

Rhythmic "Sixty Minute Man" emanated from the Supe Store juke box and Larry (The Maestro) Chiodetti beat against the table like mad in keeping time with the jumpy tempo. T-shirted Bobby Marlow was just leaving the Sunday morning bull session and dapper Bill Kilroy had just purchased the morning newspapers.

This was before Lillian Ross did the same in Picture (1952) or Truman Capote used the technique in The Muses are Heard (1956). More importantly, Talese included among his subjects both the "losers" and the unnoticed. He was more interested in those who did not attain the glory of winning and less so in hero-worshipping the winners.

After graduating in June 1953, he moved to New York City yet could only find work as a copyboy. The job was, however, at the esteemed New York Times and he showed up for his mundane position nevertheless in handstitched Italian suits. He was eventually able to get an article published in the Times, albeit unsigned (without credit). In "Times Square Anniversary" (November 2, 1953), he interviewed the man who was responsible for running the headlines that flash across the famous marquee above Times Square.

“I think most journalists are pretty lazy, number one. A little lazy and also they're spoon-fed information, such as the weapons of mass destruction back in 2003....you have these people who create a package of news, develop it as a story line, a scenario, and they find, as Mailer once said about the press, that they're like a donkey. You have to feed the donkey. The donkey every day has to eat. So special interests throw information at this damn animal that eats everything. Tin cans, garbage.”

He followed this with an article in the February 21, 1954 edition concerning the chairs used on the boardwalk of Atlantic City (something with which he was familiar as his home town of Ocean City is the next hamlet south of the gambling mecca). Yet, his budding journalism career would have to be put on hold – Talese was drafted into the United States Army in 1954.

While at the University of Alabama, he had been required (as were all male students at the time owing to the Korean War) to join the Reserve Officers' Training Corps (ROTC) and had moved to New York awaiting his eventual commission as a second lieutenant. He was sent to Fort Knox, Kentucky, to train in the Tank Corps. Finding his mechanical skills lacking, he was transferred to the Office of Public Information where he once again worked for a local paper, Inside the Turret, and soon had his own column, "Fort Knox Confidential".

Having kept in touch with his former employers at the Times, when Talese completed his military obligation in 1956 he returned to New York as a full-fledged sports reporter. He later opined, "Sports is about people who lose and lose and lose. They lose games; then they lose their jobs. It can be very intriguing." Of the various fields, boxing held the most appeal for Talese, largely because it was about individuals engaged in contests and those individuals in the mid to late 1950s were becoming predominately non-white at the prizefight level. He wrote 38 articles about Floyd Patterson alone.

For this, he was rewarded with a promotion to the Albany Bureau to cover state politics. It was a short-lived assignment, however, as Talese's exacting habits and meticulous style soon irritated his new editors to the point that they recalled him to the city, assigning him to write minor obituaries. He puts it, "I was banished to the obituary desk as punishment — to break me. There were major obituaries and minor obituaries. I was sent to write minor obituaries not even seven paragraphs long." After a year in the Times obituary section, he began to write articles for the Sunday Times which was run as a separate organization from the daily Times by editor Lester Markel.

Talese's first piece in Esquire - a series of scenes in the city - appeared in a special New York issue in July 1960. When the Times newspaper unions struck the paper in December 1962, Talese had plenty of time to watch rehearsals for a production by Broadway director Joshua Logan for an Esquire profile. As Carol Polsgrove points out in her history of Esquire in the Sixties, it was the kind of reporting he liked to do best: "just being there, observing, waiting for the climactic moment when the mask would drop and true character would reveal itself."

In 1964, Talese published The Bridge: The Building of the Verrazano-Narrows Bridge (1964), a reporter-style, non-fiction depiction of the construction of the Verrazano-Narrows Bridge in New York City. In 1965, he left The New York Times to write full-time for editor Harold Hayes at Esquire. His 1966 Esquire article on Frank Sinatra, "Frank Sinatra Has a Cold", is one of the most influential American magazine articles of all time, and a pioneering example of New Journalism and creative nonfiction. With what some have called a brilliant structure and pacing, the article focused not just on Sinatra himself, but also on Talese's pursuit of his subject.

Talese's celebrated Esquire piece about Joe DiMaggio, "The Silent Season of a Hero" - in part a meditation on the transient nature of fame - also appeared in 1966. When a number of Esquire pieces were collected into a book called Fame and Obscurity, Talese paid tribute in its introduction to two writers he admired by citing "an aspiration on my part to somehow bring to reportage the tone that Irwin Shaw and John O'Hara had brought to the short story." Honor Thy Father (1971) was made into a feature film.

In 2008, The Library of America selected Talese’s 1970 account of the Charles Manson murders, “Charlie Manson's Home on the Range”, for inclusion in its two-century retrospective of American True Crime.

Gay Talese appeared in several strips of the comic Doonesbury, giving an interview to radio host Mark Slackmeyer to promote his book Thy Neighbor's Wife. Trudeau depicted him wearing a pith helmet to represent his journey into dangerous journalistic terrain.

Mentioned in the lyrics of the Pete Townshend song "Communication".