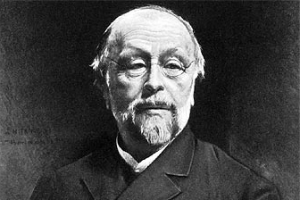 Hippolyte Adolphe Taine (21 April 1828 – 5 March 1893) was a French critic and historian. He was the chief theoretical influence of French naturalism, a major proponent of sociological positivism and one of the first practitioners of historicist criticism. Literary historicism as a critical movement has been said to originate with him. Taine is particularly remembered for his three-pronged approach to the contextual study of a work of art, based on the aspects of what he called "race, milieu, and moment".

Taine had a profound effect on French literature; the 1911 Encyclopædia Britannica asserted that "the tone which pervades the works of Zola, Bourget and Maupassant can be immediately attributed to the influence we call Taine's."

Taine was born in Vouziers, but entered a boarding school, the Institution Mathé, whose classes were conducted at the Collège Bourbon, at the age of 13 in 1841, after the death of his father. He excelled as a student, receiving a number of prizes in both scientific and humanistic subjects, and taking two Baccalauréat degrees at the École Normale before he was 20. Taine's contrarian politics led to difficulties keeping teaching posts, and his early academic career was decidedly mixed; he failed the exam for the national Concours d'Agrégation in 1851. After his dissertation on sensation was rejected, he abandoned his studies in the social sciences, feeling that literature was safer. He completed a doctorate at the Sorbonne in 1853, with considerably more success in his new field; his dissertation, Essai sur les fables de La Fontaine, won him a prize from the Académie française.

Taine was criticized, in his own time and after, by both conservatives and liberals; his politics were idiosyncratic, but had a consistent streak of skepticism toward the left; at the age of 20, he wrote that "the right of property is absolute." Peter Gay describes Taine's reaction to the Jacobins as stigmatization, drawing on The French Revolution, in which Taine argues:

Some of the workmen are shrewd Politicians whose sole object is to furnish the public with words instead of things; others, ordinary scribblers of abstractions, or even ignoramuses, and unable to distinguish words from things, imagine that they are framing laws by stringing together a lot of phrases.

This reaction led Taine to reject the French Constitution of 1793 as a Jacobin document, dishonestly presented to the French people. Taine rejected the principles of the Revolution in favor of the individualism of his concepts of regionalism and race, to the point that one writer calls him one of "the most articulate exponents of both French nationalism and conservatism."

Other writers, however, have argued that, though Taine displayed increasing conservatism throughout his career, he also formulated an alternative to rationalist liberalism that was influential for the social policies of the Third Republic. Taine's complex politics have remained hard to read; though admired by liberals like Anatole France, he has been the object of considerable disdain in the twentieth century, with a few historians working to revive his reputation.

Taine is best known now for his attempt at a scientific account of literature, based on the categories of race, milieu, and moment. Taine used these words in French (race, milieu et moment); the terms have become widespread in literary criticism in English, but are used in this context in senses closer to the French meanings of the words than the English meanings, which are, roughly, "nation", "environment" or "situation", and "time".

Taine argued that literature was largely the product of the author's environment, and that an analysis of that environment could yield a perfect understanding of the work of literature. In this sense he was a sociological positivist (see Auguste Comte), though with important differences. Taine did not mean race in the specific sense now common, but rather the collective cultural dispositions that govern everyone without their knowledge or consent. What differentiates individuals within this collective "race", for Taine, was milieu: the particular circumstances that distorted or developed the dispositions of a particular person. The "moment" is the accumulated experiences of that person, which Taine often expressed as momentum; to some later critics, however, Taine's conception of moment seemed to have more in common with Zeitgeist.

Though Taine coined and popularized the phrase "race, milieu, et moment," the theory itself has roots in earlier attempts to understand the aesthetic object as a social product rather than a spontaneous creation of genius. Taine seems to have drawn heavily on the philosopher Johann Gottfried Herder's ideas of volk (people) and nation in his own concept of race; the Spanish writer Emilia Pardo Bazán has suggested that a crucial predecessor to Taine's idea was the work of Germaine de Staël on the relationship between art and society.

Taine's influence on French intellectual culture and literature was enormous. He had a special relationship, in particular, with Émile Zola. As critic Philip Walker says of Zola, "In page after page, including many of his most memorable writings, we are presented with what amounts to a mimesis of the interplay between sensation and imagination which Taine studied at great length and out of which, he believed, emerges the world of the mind." Zola's reliance on Taine, however, was occasionally seen as a fault; Miguel de Unamuno, after an early fascination with both Zola and Taine, eventually concluded that Taine's influence on literature was, all in all, negative.

Taine also influenced a number of nationalist literary movements throughout the world, who used his ideas to argue that their particular countries had a distinct literature and thus a distinct place in literary history. In addition, post-modern literary critics concerned with the relationship between literature and social history (including the New Historicists) continue to cite Taine's work, and to make use of the idea of race, milieu, and moment. The critic John Chapple, for example, has used the term as an illustration of his own concept of "composite history."

Taine shared a correspondence with the philosopher Friedrich Nietzsche, who later referred to him in Beyond Good and Evil as "the greatest living historian". He was also the subject of Stefan Zweig's doctoral thesis, "The Philosophy of Hippolyte Taine."

The chief criticism of race, milieu, and moment at the time the idea was created was that it did not sufficiently take into account the individuality of the artist, central to the creative genius of Romanticism. Even Zola, who owed so much to Taine, made this objection, arguing that an artist's temperament could lead him to make unique artistic choices distinct from the environment that shaped his general viewpoint; Zola's principal example was the painter Édouard Manet. Similarly, Gustave Lanson argued that race, milieu, and moment could not among themselves account for genius; Taine, he felt, explained mediocrity better than he explained greatness.

A distinct criticism concerns the possible sloppiness of the logic and scientific basis of the three concepts. As Leo Spitzer has written, the actual science of the idea, which is vaguely Darwinian, is rather tenuous, and shortly after Taine's work was published a number of objections were made on scientific grounds. Spitzer also points out, again citing period sources, that the relationship between the three terms themselves was never well understood, and that it is possible to argue that moment is an unnecessary addition implied by the other two.