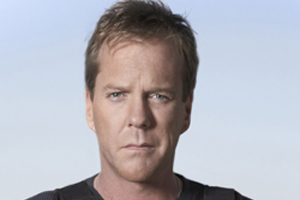 Kiefer William Frederick Dempsey George Rufus Sutherland (born 21 December 1966) is a British-born Canadian actor, film producer, and film director. He is best known for his portrayal of Jack Bauer on the Fox series 24 for which he won an Emmy Award, a Golden Globe Award, two Screen Actors Guild Awards, and two Satellite Awards. He also starred as Martin Bohm in the Fox drama Touch, and will provide the English voice of Big Boss in the upcoming Metal Gear Solid V: The Phantom Pain.

Sutherland was born in London, the son of Donald Sutherland and Shirley Douglas, both of whom are successful Canadian actors. He is of primarily Scottish descent, with some English and German ancestry. His maternal grandfather was Scottish-born Canadian politician and former Premier of Saskatchewan Tommy Douglas, who is widely credited for bringing universal health care to Canada.

Stand by Me was the first film Sutherland made in the United States. He played the neighborhood bully in this coming of age story about the search for a dead body. Sutherland has appeared in more than 70 films, most notably Twin Peaks: Fire Walk with Me, A Few Good Men, Flatliners, Young Guns, The Vanishing, The Three Musketeers, Eye for an Eye, Dark City, A Time To Kill, and The Sentinel.

The actor is also a frequent collaborator with director Joel Schumacher, and has appeared in The Lost Boys, Flatliners, Phone Booth and the big screen adaptation of A Time to Kill. In The Lost Boys, Sutherland was reunited with actor Cory Feldman, who he had previously worked with on Stand by Me.

In 2005, Sutherland was inducted into Canada's Walk of Fame in Toronto, where both of his parents have also been inducted. In 2009, he was awarded a star on the Hollywood Walk of Fame. Sutherland was the first Inside the Actors Studio guest to be the child of a former guest; his father, Donald, appeared on the show in 1998. Sutherland was featured on the cover of the April 2006 edition of Rolling Stone, in an article entitled "Alone in the Dark with Kiefer Sutherland." The article began with Sutherland revealing his interest to be killed off in 24. However, he stated, "Don't get me wrong. I love what I do." It also revealed that he devoted 10 months a year working on 24.

He has starred in Japanese commercials for CalorieMate, performing a parody of his Jack Bauer character. Sutherland also provides voice-overs for the current ad campaign for the Ford Motor Company of Canada. In mid-2006, he voiced the Apple, Inc. advertisement announcing the inclusion of Intel chips in their Macintosh computer line. He also voices the introduction to NHL games on the Versus network in the U.S. He has appeared in a Brazilian TV commercials for Citroën C4 sedan and a voice-over for a commercial for Bank of America. He voices Sgt. Roebuck in Treyarch's video game Call of Duty: World at War and will voice Punished Snake (aka Big Boss) in the upcoming Metal Gear Solid V: The Phantom Pain, taking over the role originally performed by David Hayter, as to provide an older voice to the aging character's role.

Sutherland is a celebrity producer of The 1 Second Film. In 2011, he made his Broadway debut, opposite Brian Cox, Jim Gaffigan, Chris Noth and Jason Patric in the Broadway revival of That Championship Season, which opened in March 2011. The show has since closed. Sutherland stars in the Fox television series Touch. Sutherland plays the father of an autistic boy who does not like to be touched, while the son also communicates future humanity interrelated events to his father through numbers and mathematics.

Since 2001, Sutherland has been associated most widely with the role of Jack Bauer, on the critically acclaimed television series 24. After being nominated four times for the "Outstanding Lead Actor in a Drama Series" Primetime Emmy Award, Sutherland won the award in 2006 for his role in 24's fifth season. In the opening skit of the 2006 Primetime Emmy Awards, Sutherland made an appearance as his 24 character, Jack Bauer. He was also nominated for Best actor in a Drama Television Series in the 2007 Golden Globe Awards for 24. According to his 2006 contract, his salary of $40 million for three seasons of the show made him the highest-earning actor on television. Sutherland constantly emphasizes that the show is merely "entertainment." The Dean of the United States Military Academy, Brigadier General Patrick Finnegan, visited the set of 24 in February 2007 to urge the show's makers to reduce the number of torture scenes and Sutherland accepted an invitation from the U.S. military to tell West Point cadets that it is wrong to torture prisoners. In an interview with OK! Magazine, Howard Gordon says that it would be an "unbearable loss" if they killed off Sutherland's character.

In an interview with Charlie Rose on 12 January 2007, Sutherland made clear statements of his opposition to torture, specifically that, "...it is widely known that you can torture someone and they'll basically tell you exactly what you want to hear, whether it's true or not, if you put someone in enough pain. Torture is not a way of procuring information. The way of procuring information is in fact quite the opposite, and unfortunately that takes a lot of time." (see minute 19:00) In another interview on 20 November 2008, Rose asked Sutherland, "You'd shut down Guantanamo tomorrow, would you not?" Sutherland's reply, "Me personally? Absolutely. And unless you can charge those detainees, I'd let them go too. The Constitution makes that really clear." (see minute 18:30)

On 14 February 2010, Fox TV announced they were temporarily suspending production of Season 8 of 24 due to a ruptured cyst near one of Sutherland's kidneys. According to the report, he waited a few days before going in to have "elective surgery" performed. It was anticipated that he would return after a week, but a further few days was needed and Fox reported that his return to set would be 1 March.

On 26 March 2010, it was announced that 24 would end at the conclusion of the 8th season, paving the way for the 24 feature film to go into production. Production was anticipated to begin at the beginning of 2011.

On 9 May 2013, Deadline.com suggested that Kiefer Sutherland is in talks with FOX to start a new, limited series of 24. On 14 May 2013, it was confirmed that the show will return for a limited series.

Sutherland has a twin sister who is a TV post-production supervisor in Toronto.

Sutherland has one daughter from his first marriage to Camelia Kath, the widow of Chicago guitarist/singer Terry Kath, to whom he was married from 1987 to 1990. Through his marriage to Camelia, he became stepfather to Michelle Kath, who has two sons.

Julia Roberts met Sutherland in 1990, when they co-starred in Flatliners. In August 1990, Roberts and Sutherland announced their engagement, with an elaborate studio-planned wedding scheduled for 14 June 1991. Roberts broke the engagement three days before the wedding allegedly because Sutherland had been meeting with a stripper named Amanda Rice. Sutherland denied having an affair with Rice and said that they only met because he liked to play pool. On the day of what was supposed to be their wedding, Roberts went to Ireland with Sutherland's friend Jason Patric.

Sutherland is a guitar collector, the majority of which are Gibson Les Pauls. Recently, the Gibson Custom shop released a guitar (signed by Sutherland), the KS-336, as part of their 'Inspired By' series. When Queen appeared on VH1 in 2006 for the Rock Honors Event, Sutherland gave Queen's introduction and announced that they are his favorite band, and that he has listened to them ever since he was a child.

Sutherland is an American football fan, particularly of USC Trojans football, and recorded a birthday message for former USC head coach Pete Carroll's 56th birthday. After losing a bet to friend Dave Andreychuk over the 2010 New England Patriots versus Baltimore Ravens playoff game, Sutherland was forced to appear on the Late Show with David Letterman wearing a dress. He is also a NASCAR fan. He narrated the IMAX film NASCAR: The IMAX Experience. Additionally, his character Jack Bauer in 24 has used the name of team owner Jack Roush as an alias.

Additionally, Sutherland paints. One of his paintings served as the cover art for the twelfth edition of the Live X acoustic compilation series released by the American alternative rock radio station WNNX.

In the late 1990s, Sutherland, inspired by the experience in his films Young Guns, The Cowboy Way, and Cowboy Up, retired from acting briefly to pursue the rodeo circuit. He purchased a 900-acre (3.6 km2) ranch in Montana, and travelled on the road with the rodeo, he participated in numerous roping contests, two of which he won in Phoenix and Albuquerque.

Sutherland was arrested in Los Angeles on 25 September 2007, on drunk driving charges, after performing poorly on a field sobriety test. His test exceeded the state's legal blood alcohol limit, and he was later released on a $25,000 bail. Sutherland pleaded no contest to the DUI charge and was sentenced to 48 days in jail. Initially, he arranged to split his sentence and spend 18 days in jail during 24's winter break in late December and early January 2008; the Hollywood writers' strike interrupted production, allowing him to serve his sentence in 48 consecutive days.

Sutherland surrendered to NYPD on 7 May 2009 for head-butting fashion designer Jack McCollough, founder and co-designer of Proenza Schouler, at the Mercer Hotel in SoHo following a fundraiser for the Metropolitan Museum of Art. Several weeks later, Sutherland and McCollough issued a joint statement in which Sutherland apologized; police later dropped the charges.

Sutherland is the co-owner (along with Jude Cole) of the independent record label Ironworks.

Sutherland reportedly fell victim to a financial scam involving cattle in 2010. According to the Associated Press, the perpetrator, Michael Wayne Carr, allegedly took US $869,000 from Sutherland, ostensibly on the account of steers to be purchased. Prosecutors alleged that Carr never purchased the steers. Carr pleaded guilty and was ordered to pay US $956,000 in restitution to Sutherland and his investment partner.