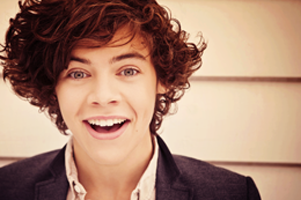 Harry Edward Styles (born 1 February 1994) is an English singer and member of the boy band One Direction.

Styles was born and raised in Holmes Chapel, Cheshire, England, where he attended Holmes Chapel Comprehensive School. He is the son of Anne Cox (née Selley) and Des Styles and has an older sister, Gemma. Styles' parents divorced when he was seven and his mother later remarried. As a sixteen-year-old he worked part-time at the W. Mandeville Bakery in Holmes Chapel.

As a child, Styles loved singing, noting Elvis Presley and The Beatles as his influences. While at Holmes Chapel Comprehensive, Styles was the lead singer for the band White Eskimo, which won a local Battle of the Bands competition.

In 2010, Styles auditioned as a solo candidate for the seventh series of the British televised singing competition The X Factor. They failed to progress to the "Boys" category at "judges' houses", and, after a suggestion by Nicole Scherzinger, a guest judge, they were put together to form a five-piece boy band at Wembley Arena, in London, England, in July 2010, during the "bootcamp" stage of the competition, thus qualifying for the "Groups" category. Subsequently, the group got together for two weeks to get to know each other and to practise. Styles came up with the name One Direction. For their qualifying song at "judges' houses", and their first song as a group, One Direction sang an acoustic version of "Torn". Simon Cowell later commented that the performance convinced him that the group "were confident, fun, like a gang of friends, and kind of fearless as well." Within the first four weeks of the live shows, they were Cowell's last act in the competition. The group quickly gained popularity in the UK.

One Direction finished in third place and immediately after the final, their song "Forever Young", which would have been released if they had won The X Factor, was leaked onto the internet. Shortly afterwards it was confirmed that One Direction had been signed by Cowell to a reported £2 million Syco Records record contract. Recording for their debut album began in January 2011, as they flew to Los Angeles to work with RedOne, a record producer. A book licensed by One Direction, One Direction: Forever Young (Our Official X Factor Story), was published by HarperCollins in February 2011, subsequently topping The Sunday Times Best Seller list. The same month, the boy band and other contestants from the series participated in the X Factor Live Tour. During the tour the group performed for 500,000 people throughout the UK. After the tour concluded in April 2011, the group continued working on their debut album. Recording took place in Stockholm, London and Los Angeles, as One Direction worked with producers Carl Falk, Savan Kotecha, Steve Mac, and Rami Yacoub, among others.

Styles came up with band name One Direction, which he thought would sound good when The X Factor announcer Peter Dickson read their name out on the live shows.

Following The X Factor, One Direction were signed to Simon Cowell's Syco Entertainment in 2010. One Direction released their first album, Up All Night, in 2011, followed by their second, Take Me Home, in 2012. One Direction: This Is Us, a documentary about the band directed by Morgan Spurlock, was released in August 2013. The film grossed more than $30 million worldwide its first weekend in theaters. The band's third album, Midnight Memories, will be released on 25 November 2013.