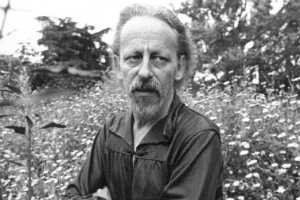 Theodore Sturgeon (born Edward Hamilton Waldo; February 26, 1918 – May 8, 1985) was an American science fiction and horror writer and critic. The Internet Speculative Fiction Database credits him with about 400 reviews and more than 200 stories.

Sturgeon's most famous work may be the science fiction More Than Human (1953), an expansion of "Baby is Three" (1952). More Than Human won the 1954 International Fantasy Award (for SF and fantasy) as the year's best novel and the Science Fiction Writers of America ranked "Baby is Three" number five among the "Greatest Science Fiction Novellas of All Time" to 1964. (Ranked by votes for all of their pre-1965 novellas, Sturgeon was second among authors behind Robert Heinlein.)

The Science Fiction and Fantasy Hall of Fame inducted Sturgeon in 2000, its fifth class of two deceased and two living writers.

Sturgeon was born Edward Hamilton Waldo in Staten Island, New York in 1918. His name was legally changed to Theodore Sturgeon—not a pseudonym—at age eleven after his mother's divorce and remarriage to William Dicky ("Argyll") Sturgeon.

He sold his first story in 1938 to the McClure Syndicate, which bought much of his early work. His first genre story was "Ether Breather", published by John W. Campbell in the September 1939 issue of Astounding Science Fiction. At first he wrote mainly short stories, primarily for genre magazines such as Astounding and Unknown, but also for general-interest publications such as Argosy Magazine. He used the pen name "E. Waldo Hunter" when two of his stories ran in the same issue of Astounding. A few of his early stories were signed "Theodore H. Sturgeon."

Sturgeon ghost-wrote one Ellery Queen mystery novel, The Player on the Other Side (Random House, 1963). This novel gained critical praise from critic H. R. F. Keating, who "had almost finished writing Crime and Mystery: the 100 Best Books, in which I had included The Player on the Other Side ... placing the book squarely in the Queen canon" when he learned that it had been written by Sturgeon. Similarly, "William DeAndrea, author and ... winner of Mystery Writers of America awards, selecting his ten favorite mystery novels for the magazine Armchair Detective, picked The Player on the Other Side as one of them. He said: "This book changed my life ... and made a raving mystery fan (and therefore ultimately a mystery writer) out of me. ... The book must be 'one of the most skilful pastiches in the history of literature. An amazing piece of work, whomever did it'."

Sturgeon wrote the screenplays for the Star Trek episodes "Shore Leave" (1966) and "Amok Time" (1967, written up and published as a Bantam Books "Star Trek Fotonovel" in 1978). The latter is known for its invention of pon farr, the Vulcan mating ritual; first use of the sentence "Live long and prosper"; and first use of the Vulcan hand symbol. Sturgeon is also sometimes credited as having deliberately put homosexual subtext in his work, like the back-rub scene in "Shore Leave". Sturgeon also wrote several episodes of Star Trek that were never produced. One of these was notable for having first introduced the Prime Directive. He also wrote an episode of the Saturday morning show Land of the Lost, "The Pylon Express", in 1975. Two of Sturgeon's stories were adapted for The New Twilight Zone. One, "A Saucer of Loneliness", was broadcast in 1986 and was dedicated to his memory. Another short story, "Yesterday was Monday", was the inspiration for the The New Twilight Zone episode "A Matter of Minutes". His 1944 novella "Killdozer!" was the inspiration for the 1970s made-for-TV movie, Marvel comic book, and alternative rock band of the same name.

Sturgeon is well-known among readers of classic science-fiction anthologies. At the height of his popularity in the 1950s he was the most anthologized English-language author alive and much respected by critics. John Clute wrote in The Encyclopedia of Science Fiction: "His influence upon writers like Harlan Ellison and Samuel R. Delany was seminal, and in his life and work he was a powerful and generally liberating influence in post-WWII US sf". He is not much known by the general public, however, and he won comparatively few awards. (One was the World Fantasy Award for Life Achievement from the 1985 World Fantasy Convention.) His best work was published before the establishment and consolidation of the leading genre awards, while his later production was scarcer and weaker. He was listed as a primary influence on the much more famous Ray Bradbury.

Sturgeon lived for several years in Springfield, Oregon. He died on May 8, 1985, of lung fibrosis, at Sacred Heart General Hospital in the neighboring city of Eugene.

He was a member of the all-male literary banqueting club the Trap Door Spiders, which served as the basis of Isaac Asimov's fictional group of mystery solvers the Black Widowers. Sturgeon was the inspiration for the recurrent character of Kilgore Trout in the novels of Kurt Vonnegut.

In 1951, Sturgeon coined what is now known as Sturgeon's Law: "Ninety percent of science fiction is crud, but then, ninety percent of everything is crud." This was originally known as Sturgeon's Revelation; Sturgeon has said that "Sturgeon's Law" was originally "Nothing is always absolutely so." However, the former statement is now widely referred to as Sturgeon's Law. He is also known for his dedication to a credo of critical thinking that challenged all normative assumptions: "Ask the next question." He represented this credo by the symbol of a Q with an arrow through it, an example of which he wore around his neck and used as part of his signature in the last 15 years of his life.

Sturgeon was a distant relative of Ralph Waldo Emerson, and through his Waldo, Hamilton Dicker and Dunn ancestors, a direct descendant of numerous influential Puritan, Presbyterian, and Anglican clergymen. Both Sturgeon and his brother Peter eventually became atheists, although Sturgeon continuously developed his own highly imaginative spiritual side. If Sturgeon was aware of much of his ancestry or stories associated with it, he never shared them with his friends or children, although the short "I Say—Ernest" (1972) does bring to life one wing of his ministerial family.

Sturgeon's sibling, Peter Sturgeon, wrote technical material for the pharmaceutical industry and eventually for the WHO, has been credited with bringing Mensa to the United States.

Peter and Theodore's birth father, Edward Waldo, was a color and dye manufacturer of middling success. With his second wife, Anne, he had one daughter, Joan.

Their stepfather, William Dickie Sturgeon (sometimes known as Argyll), was a mathematics teacher at a prep school and then Romance Languages Professor at Drexel Institute later Drexel Institute of Technology in Philadelphia.

Sturgeon held a wide variety of jobs during his lifetime.

As an adolescent, he wanted to be a circus acrobat; an episode of rheumatic fever prevented him from pursuing this.

From 1935 (aged 17) to 1938, he was a sailor in the merchant marine, and elements of that experience found their way into several stories.

He sold refrigerators door to door.

He managed a hotel in Jamaica around 1940–1941, worked in several construction and infrastructure jobs (driving a bulldozer in Puerto Rico, operating a gas station and truck lubrication center, work at a drydock) for the US Army in the early war years, and by 1944 was an advertising copywriter.

In addition to freelance fiction and television writing, he also operated a literary agency (which was eventually transferred to Scott Meredith), worked for Fortune magazine and other Time Inc. properties on circulation, and edited various publications. Sturgeon had somewhat irregular output, frequently suffering from writer's block.

Theodore Sturgeon vividly recalled being in the same room with L. Ron Hubbard, when Hubbard became testy with someone there and retorted, "Y'know, we're all wasting our time writing this hack science fiction! You wanta make real money, you gotta start a religion!" Reportedly Sturgeon also told this story to others.

Sturgeon was married three times, had two long-term committed relationships outside of marriage, divorced once, and fathered a total of seven children.

His first wife was Dorothe Fillingame (married 1940, divorced 1945) with whom he had two daughters, Patricia and Cynthia.

In 1969, he began living with Wina Golden, a journalist, with whom he had a son, Andros.

Finally, his last long-term committed relationship was with writer and educator Jayne Engelhart Tannehill, with whom he remained until the time of his death.

Sturgeon was a lifelong pipe smoker. His death from lung fibrosis may have been caused by exposure to asbestos during his Merchant Marine years.