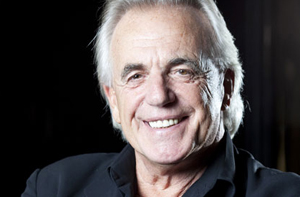 Peter James Stringfellow (born on 17 October 1940 in Sheffield, West Riding of Yorkshire, England) is a British businessman and nightclub owner.

Peter was born in the City General Hospital, Sheffield, West Riding of Yorkshire, on 17 October 1940, to Elsie Bowers and James William Stringfellow, a steelworker who served in the Royal Scots Greys during World War II. He is the eldest of four, his three brothers are Geoffrey, Paul and Terry.

The family lived in Andover Street, Pitsmoor, Sheffield until 1948 when they had moved to Marshall Street, Pitsmoor. Peter attended Pye Bank Church of England Primary School. Peter failed his 11 plus and so attended Burngreave Secondary School for one year. He then passed the exam for Sheffield Central Technical College and he left three years later at the age of 15 with a 4th grade Technical Diploma.

When Stringfellow was only 13 years old, he worked at the Wicker Cinema but his first job after leaving school was as an assistant tie salesman at Austen Reeds for three weeks. This was followed by half a day as an apprentice car mechanic. He then spent three days as a trainee Barber before finding work as a trainee projectionist at the Regal Cinema in Sheffield. Under pressure from his father, he left the cinema and went to join his father an apprentice turner. He stayed six weeks then enrolled as an apprentice in the Merchant Navy, at the age of 16, as a trainee waiter, and a kitchen hand galley boy. His sailing career lasted two years and took him to Philadelphia and New York where he celebrated his 17th Birthday. From there he visited various Caribbean Islands and finally Venezuela, returning to Tilbury Docks, England. He decided the sea life was not for him and he returned to Sheffield.

On his return to Sheffield, he worked briefly, at least one matinee show, as a curtain boy at the Lyceum Cinema. He finally settled as a van boy for Gillott's Bakery where he met his first wife, Norma Williams. After passing his driving test at 18, he had several jobs. He worked as a travelling photographer, worked in Sutherland’s potted meat factory, and at Nova Sewing Machines and Dobson’s Furnishings Company. At Dobson’s he was accused of selling stolen carpets and sentenced to two weeks in Armley Prison, Leeds in June 1962 and 6 weeks in Ford Open Prison.

After his brief incarceration, he was unable to find regular work and this led to the beginning of his career as a nightclub owner.

In 1962, Stringfellow rented St. Aidan's church hall in Sheffield every Friday night, also known as The Black Cat Club. Several bands played in the club like the Pursuers, Dave Berry and the Cruisers, Johnny Tempest and the Cadillacs and from London, Screaming Lord Sutch, the Savages, Count Lindsay, and Gene Vincent. His fortunes changed when The Beatles played on 2 April 1963. The demand for concert tickets was so great that Stringfellow was forced to rent a larger venue, the Azena Ballroom in Sheffield. On that night he sent The Beatles a telegram congratulating them on their first album, Please Please Me.

In 1963 Stringfellow began another club, "The Blue Moon", at St. Johns Church Hall in Sheffield. The opening act was the Marauders who had a record in the British top 30. More bands followed such as the Kinks. Other bands that played at the club and became famous were Freddie Starr and the Midnighters, the Searchers, Shane Fenton and the Fentones, Wayne Fontana, Long John Baldry and the Hoochie Coochie Men, Rod Stewart and the Soul Agents, Vance Arnold & The Avengers, Dean Marshall and the Deputies. Also in the same year, Stringfellow's Theatre promotions at Sheffield City Hall were a big success. They featured acts such as the Rolling Stones, the Big Three, Fleetwood Mac and the Nice.

In 1964, Stringfellow opened another club called King Mojo Club in Sheffield. During its three and half years of business, several bands played at the club. Some of the bands were the Who, Pink Floyd, Long John Baldry, Rod Stewart, Elton John, the Mersey Beats and the Hurd, the Spencer Davis Group, the Pretty Things, Manfred Mann, the Small Faces, Jimi Hendrix. There were also some American acts who played in the club, such acts were the first Tamla/Motown acts in the UK, Ben E. King, Sonny Boy Williamson, Tina Turner, and Little Stevie Wonder.

In 1968, he went into another business with Down Broadway. It was the first proper premises for clubbing. It was just below the Stylo's shoe shop in the centre of Sheffield. Blodwyn Pig was the first act to play at Down Broadway and John Peel was booked to play as the Star DJ. Super group Yes also played at the club. In 1969, Stringfellow acquired the first alcohol licence for another of his clubs called the Penthouse – Sheffield. The club only lasted for a year due to trouble with overcrowding and objections from the local police. This prompted him to sell it and move to Leeds.

In 1970, he opened Cinderella's in Leeds. This was Stringfellow's first super club, mixing recorded music and live bands. He served as the DJ and the first band on the opening night was Georgie Fame and the Blue Flames before they became famous. In 1972, Stringfellow acquired a space next door to Cinderella to create another club called Rockafella's. This was the first and last of his super cabaret and super clubs. Comedy duo Mike & Bernie Winters and magician Paul Daniels performed at the club. The two clubs were combined in 1973 and given the name Cinderella Rockafella's, and Stringfellow dropped the cabaret and put in full-time DJs such as Chris Crossley and Peter Tyler. He and his brother, Paul Stringfellow, also served as DJs.

In 1980, he sold The Millionaire Club to Granada Ltd. and he then moved with his whole family to London. There he opened Stringfellows Covent Garden. It was an immediate success as a night club in London, where celebrities, international film stars, TV personalities, rock stars, models, paparazzi photographers, and national newspaper journalists partied for the next 15 years. In 1983, Stringfellow took over the old cabaret club, Talk of the Town, which had been closed down. He re-opened it with its original name Hippodrome and it became the "World's Greatest Disco". The Hippodrome introduced its first gay night at the venue under his management.

In 1996, Stringfellow's autobiography, King of Clubs, was published by Little Brown. It was serialised in the Baltimore Sun newspaper and became a best-seller.

In 2005, a political blogger named Guido Fawkes launched an online campaign for Stringfellow to be knighted.

In 1996, Cabaret of Angels, a table side dancing club was opened for three nights a week at Stringfellows Covent Garden.

In 2006, Stringfellow opened his second adult entertainment club called Angels in Wardour Street, Soho. He was the first club owner to gain a fully nude licence from Westminister Council. In 2009, he criticised the Policing and Crime Act of 2009, saying the licensing changes with regards to lap dancing were "unnecessary” and he would be appealing to the European Court of Human Rights if his current licences were not renewed. In 2012, he was granted the necessary SEV Licence for Stringfellows Covent Garden and Angels Soho. and has been able to successfully market Angels as providing rooms for the entertainment "in privacy" of young women in lingerie.

Stringfellow first appeared on television as a warm-up act on Ready Steady Go! in 1964. He has contributed to numerous programs, both radio and television, over the last 50 years. He appeared on the celebrity edition of Come Dine with Me, with the first broadcast on 17 September 2008. He also appeared in season 15 episode 1 of Top Gear, which was broadcast on 27 June 2010, where he had to help Jeremy when he was stuck in a rolled over Reliant Robin.

He has declined offers to appear on I'm a Celebrity...Get Me Out of Here!, Celebrity Big Brother and Strictly Come Dancing.

Stringfellow married then 27-year-old former Royal Ballet dancer, Bella Wright, in Barbados on Valentine’s Day 2009. He was previously married to Norma Williams in 1960. They had a daughter, Karen who was born in the 1960s, now a successful restaurant owner in Florida. After they divorced, he married Coral Wright in 1967. They have one son together, Scott, a racecar driver. They divorced in 1984. He also had a 12-year relationship with Frisbee Fox, which ended in 1996. In early 2013, he and his wife announced she was pregnant with their first child together. He lives in London and in Mallorca, where he kept a boat for many years.