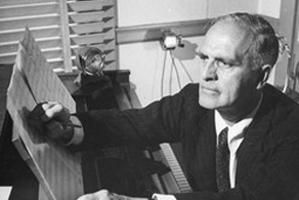 American musician, a composer, director and arranger who won 11 Oscar nominations and the Oscar for his musical score of "The Wizard of Oz," 1939. Along with film musical scores, he was a lyricist, arranger and adapter of hundreds of scores. His work appeared in dramas, musicals, biographical features, operettas and docudramas, memorable scores of timeless films. During the peak of the MGM musical, he created vehicles for such stars as Jeanette MacDonald, Judy Garland, Gene Kelly and Fred Astaire.

While growing up, Stothart cultivated his love for music while singing in an Episcopal Church Choir in his native Milwaukee. He studied to become a history teacher, paying his way by working as a theatre usher. The combination of daily exposure to the arts and his extracurricular activities staging school musicals convinced Stothart that music would be his life.

After graduating from the University of Wisconsin, he wrote the music for the amateur productions of the University's Haresfoot Society. When a show was given professional staging in Chicago, it was so acclaimed that Stothart became a fulltime composer in the Midwest and ultimately, New York. He did road-show musical direction for impresario Arthur Hammerstein, the man who gave Stothart his first Broadway directing job with a production called "Blue Kitten;" this led to his writing the music for two subsequent productions in collaboration with Hammerstein's nephew Oscar Hammerstein Jr. and with Otto Harbach.

With experience, Stothart began to integrate more of the music into the storyline. "Rose Marie" was a huge hit of the '20s written with Rudolf Friml. During this first great flush of success, Stothart was shattered by the sudden and tragic death of his wife, Dorothy. Grieving, he threw himself into the catharsis of work, collaborating with George Gershwin and with Kalmar and Ruby for the production of "Good Boy," which included the hit "I Wanna Be Loved By You."

In 1929, Stothart headed for Hollywood where talking pictures were just beginning to take hold. His earliest assignment was the score for the Russian silent flic, "End of St. Petersburg," followed by the Lawrence Tibbett musical "The Rogue Song," 1930. He remained at MGM for the rest of his life, composing original scores for some films and arranging the works of others in such productions as "The Wizard of Oz," 1939.

In 1947 Stothart paid a holiday visit to his ancestral Scotland. After his return, he suffered a heart attack and it was during his recovery that he wrote a symphonic

poem based on the experience. Herbert Stothart died of cancer 2/01/1949, Los Angeles, CA shortly after

writing his last piece, "The Voices of Liberation."