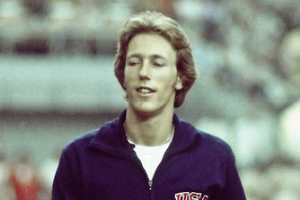 Dwight Edwin Stones (born December 6, 1953) is an American television commentator and a two-time Olympic bronze medalist and former three-time world record holder in the men's high jump. During his 16-year career, he won 19 national championships. In 1984, Stones became the first athlete to both compete and announce at the same Olympics. Since then, he has been a color analyst for all three major networks in the United States and continues to cover track and field on television. He served as an analyst for NBC Sports coverage of Track and Field at the 2008 Summer Olympics.

Born in Los Angeles, California, Stones set a national high school record in 1971 at 2.17 m (7 ft 1 1⁄2 in), then won the bronze medal at age 18 at the 1972 Summer Olympics in Munich, West Germany. He set his first world record the following summer when he cleared 2.30 m (7 ft 6 1⁄2 in), also at Munich. That jump also made him the first "flop" jumper to set a world record, five years after Dick Fosbury made that style famous while winning the gold medal at the 1968 Summer Olympics in Mexico City. Stones raised the world record to 2.31 m (7 ft 7 in) in 1976 at the NCAA Championships at Franklin Field in Philadelphia in June, and added another centimeter to the record two months later.

Stones was one of the world's top high jumpers from 1972 to 1984 and has been twice named the World Indoor Athlete of the Year by Track & Field News. At the 1976 Summer Olympics in Montréal, he was a heavy favorite to win the gold medal. Earlier, he finished second at the U.S. Olympic Trials, then had to settle for another Olympic bronze when his jumping ability was hampered by competition in the rain. A few days later in Philadelphia, he raised the world record to 2.32 m (7 ft 7 1⁄2 in) in dry conditions at Franklin Field.

His participation at the Montreal Games sparked a heated debate, in which he supposedly said he hated French Canadians (Montréal-Matin Newspaper, July 29, 1976, pages 5 and 8); this debate became so inflamed that he felt the need to start wearing a t-shirt that said he loved the people who organized the Games.

Stones attended UCLA his freshman year (1971–72), and later transferred to Long Beach State for a year and a half, and is a member of that university's hall of fame.

In 1998, Stones was inducted into the USA Track and Field Hall of Fame.