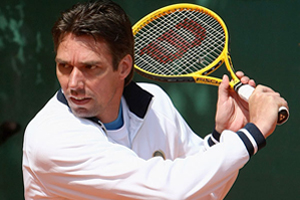 Stich was raised in Elmshorn, Schleswig-Holstein. He turned professional in 1988 and won his first top-level singles title in 1990 at Memphis, Tennessee.

Stich won Wimbledon in 1991. He defeated the defending champion and World No. 1 Stefan Edberg in the semifinals, 4–6, 7–6, 7–6, 7–6, without breaking his service once. Then in the final, he beat his compatriot and three-time Wimbledon champion Boris Becker in straight sets.

In 1992, Stich teamed with John McEnroe to win the men's doubles title at Wimbledon in a five-set and five-hour final that stretched into Monday (the day after the tournament normally ends) and ended with a 19–17 final set. Then at the Summer Olympic Games in Barcelona, Stich teamed with Becker to win the men's doubles gold medal. Stich also won the 1992 Grand Slam Cup, defeating Michael Chang in the final.

A major highlight of 1993 for Stich came at the end-of-year ATP World Championships, where he defeated Pete Sampras in the final. Playing for Germany, Stich also won both the Davis Cup and the Hopman Cup in 1993.

Stich reached his second Grand Slam singles final at the 1994 US Open, where he lost in straight sets to Andre Agassi. Stich also helped Germany win the World Team Cup in 1994.

Stich upset defending champion Thomas Muster in four sets in the fourth round of the 1996 French Open en route to appearing in his third and final Grand Slam singles final, where he was defeated by Yevgeny Kafelnikov in straight sets. He also won his final career singles title that year at Antwerp. His last doubles title came in 1997 at Halle.

Stich's all-round ability, both from the baseline and at the net, allowed him to become one of the few players to win tournaments on all surfaces. He is one of only five players of his generation to have a positive career head-to-head record against Sampras.

Stich announced his retirement from the professional tour in 1997 following Wimbledon. His last run at Wimbledon started with a win over U.S. top-10 player Jim Courier and ended with a five-set loss to Cédric Pioline in the semifinals. Prior to the match with Pioline, Stich had played down the impression that the tournament was a swan song by saying in English at a press conference, "I had not come to retire. I had come here to win Wimbledon."

Since his retirement, he has devoted most of his time to his own AIDS foundation. He also works as a tennis commentator for the BBC. Stich was married to the German actress Jessica Stockmann from 1992 to 2003. In 2005, he married Alexandra Rikowski. They live in Hamburg.

At the Wimbledon tournament in 2007, Stich accused Serena Williams of exaggerating an injury, stating that "You're either injured or you're not. I'm not sure what we saw last night." Williams had collapsed in pain in a fourth round match with Daniela Hantuchová. Williams denied the allegations angrily, stating "My career is actually more stellar than Stich's, so he can say whatever he pleases."