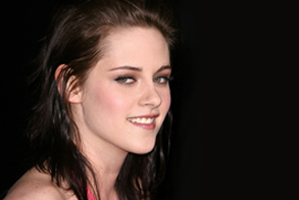 Stewart was born and raised in Los Angeles, California. Her father, John Stewart, is a stage manager and television producer who has worked for Fox. Her mother, Jules Mann-Stewart, is a script supervisor originally from Maroochydore, Queensland, Australia, who has also directed a film. She has an older brother, Cameron B. Stewart, and an adopted brother, Taylor. Stewart attended school until the seventh grade and then continued her education by correspondence until completing high school.

As she grew up with a family who all worked behind the camera, Stewart thought she would become a screenwriter/director, but never considered being an actor. "I never wanted to be the center of attention – I wasn't that 'I want to be famous, I want to be an actor' kid. I never sought out acting, but I always practiced my autograph because I love pens. I'd write my name on everything." Stewart's acting career began at the age of eight, after an agent saw her perform in her elementary school's Christmas play.

After she auditioned for a year, Stewart gained her first role in a small, nonspeaking part in the Disney Channel original film The Thirteenth Year. Then, she was cast in the film The Flintstones in Viva Rock Vegas as the "ring toss girl". She also appeared in the independent film The Safety of Objects (2001), in which she played the tomboy daughter of a troubled single mother (Patricia Clarkson). Stewart also played a tomboy in the film Panic Room (2002), as the diabetic daughter of a divorced mother (Jodie Foster). She was nominated for a Young Artist Award for her performance.

After Panic Room's success, Stewart was cast in another thriller, Cold Creek Manor (2003), playing the daughter of Dennis Quaid's and Sharon Stone's characters. She was nominated again for a Young Artist Award for her performance. About this time in her career, she started homeschooling because of her irregular schedule, which was affecting her grades. She said, "I started homeschooling because my teachers were failing me. I think it was just resentment – I made more work for them. But homeschooling is great; you can study what you want, which allows you to get more excited about what you're doing".

Her first starring role followed, in the children's action-comedy Catch That Kid (2004), opposite Max Thieriot and Corbin Bleu. Stewart also played the role of Lila in the thriller Undertow (2004). Stewart starred in the Lifetime/Showtime television film Speak (2004), based on the novel by the same name by Laurie Halse Anderson. Stewart, 13 at the time of filming, played a high school freshman, Melinda Sordino, who stops almost all speaking after being raped.

Stewart appeared in the fantasy-adventure film Zathura (2005), playing the role of Lisa, the irresponsible older sister of two little boys. They turn their house into a spacecraft hurtling uncontrollably in outer space by playing a board game. The film received praise by critics, but Stewart's performance did not garner much media attention. Her character is immobilized during most of the film. The next year, she played the character Maya in Fierce People (2006), directed by Griffin Dunne. After that film, she received the lead role of Jess Solomon in the supernatural thriller film The Messengers.

Stewart appeared as teenager Lucy Hardwicke in In the Land of Women (2007), a romantic drama starring Meg Ryan and Adam Brody. The film, as well as Stewart's performance, received mixed reviews. That same year, Stewart had a small role in the Sean Penn-directed adaptation Into the Wild. For her portrayal of Tracy – a teenage singer who has a crush on young adventurer Christopher McCandless (played by Emile Hirsch) – Stewart received mixed reviews. While Salon.com considered her work a "sturdy, sensitive performance", and the Chicago Tribune noted that she did "vividly well with a sketch of a role," Variety's critic Dennis Harvey said, "It's unclear whether Stewart means to be playing hippie-chick Tracy as vapid, or whether it just comes off that way." After Into the Wild, Stewart had a cameo appearance in Jumper and also appeared in What Just Happened, which was released in October 2008. She also co-starred in The Cake Eaters, an independent film that has been screened only at film festivals. Both the film and Stewart's performance received many positive reviews . Critics such as Bill Goodykoontz from The Arizona Republic said that Stewart "really shines.... She excels at both aspects of the performance, giving Georgia a strength that defies any sort of pity one might feel for her, without letting us forget her vulnerability".

On November 16, 2007, Summit Entertainment announced that Stewart would play main character Isabella "Bella" Swan in the film Twilight, based on Stephenie Meyer's bestselling vampire romance novel of the same name. Stewart was on the set of Adventureland when director Catherine Hardwicke visited her for an informal screen test which "captivated" the director. She starred alongside Robert Pattinson, who plays Edward Cullen, her character's vampire boyfriend. The film began production in February 2008 and finished filming in May 2008.

Twilight was released domestically on November 21, 2008. Stewart's performance garnered mixed reviews with some critics calling her "the ideal casting choice" and praising her for conveying "Bella's detachment, as well as her need to bust through it" while others criticized her acting for being "wooden" and lacking variety in her facial expressions which they described as "blank". Adventureland was released on April 3, 2009 a film in which Stewart's reception was much more positive. Reelviews' critic James Berardinelli said "Stewart is more than merely appealing in this role - she makes Em a fully realized woman, and some of the most intricate development results from what the camera observes in Stewart's eyes.". Los Angeles Times Kenneth Turan said Stewart was "beautiful, enigmatic and very experienced".  and MSN Movies James Rocchi stated "Stewart's vulnerable, spooky power is used to nice effect."  Stewart reappeared as Bella in the sequel, The Twilight Saga: New Moon, once again receiving mixed reviews for her performance. Jordan Mintzer from Variety called Stewart "the heart and soul of the film" and praised her for giving "both weight and depth to dialogue...she makes Bella's psychological wounds seem like the real deal." Manohla Dargis from The New York Times said Stewart's "lonely-girl blues soon grow wearisome" in the film, and Billy Goodykoontz from The Arizona Republic stated "Stewart is a huge disappointment... She sucks the energy right out of the film". She reprised this role in The Twilight Saga: Eclipse.

At the 2010 82nd Annual Academy Awards, Stewart and Twilight co-star Taylor Lautner presented a tribute in honour of the horror movie genre.

In 2010, Stewart portrayed rock star Joan Jett in The Runaways, a biographical film of the titular band of the same name from writer-director Floria Sigismondi. Stewart met with Jett over the 2008–2009 New Year to prepare for the role and ended up prerecording songs in a studio for the film. She received praise for her performance as the Metro Times wrote, "It turns out that Stewart is actually really good at capturing Jett's icy, tough-but-cool girl swagger, adding the needed touches of vulnerability that transform it into a pretty terrific performance... Stewart is a genuine rock star here." Also, A. O. Scott of The New York Times noted "Ms. Stewart, watchful and unassuming, gives the movie its spine and soul." The same year, Stewart was listed as the highest earning female actress in Vanity Fair's "2010's Top Hollywood Top Earners List" with an estimated earning of $28.5 million for her movie appearances in 2010.

The Twilight Saga: Breaking Dawn – Part 1 was released on November 18, 2011. Though the film received negative reviews, Stewart's performance was praised. Gabriel Chong called Stewart's performance "mesmerising" and said that she "makes  every emotion keenly felt that runs the gamut from joy, trepidation, anxiety, distress and above all quiet and resolute determination" and The Village Voice's Dan Konis saying Stewart "beautifully underplays" the role. Some critics found Pattinson and Stewart's chemistry lacking and said that the relationship came off like a "charade" onscreen or that none of the three leads was convincing in their roles. She concluded the role in the finale The Twilight Saga: Breaking Dawn – Part 2 in November 2012.

On December 6, 2011, Stewart was named number one on Forbes magazine's list of "Hollywood's Best Actors for the Buck." On January 13, 2012, she became the face of a new unnamed Balenciaga perfume and on June 29, it was announced that the perfume will be entitled "Florabotanica".

On June 1, 2012, Stewart starred as Snow White in the film Snow White and the Huntsman. Stewart appears as Mary Lou in On the Road, the film adaption of Jack Kerouac's cult classic novel of the same name.

According to Forbes, Stewart was the highest paid actress in 2012 with total earnings of $34.5 million. She earned $12.5 million each for last two installments in the Twilight series, including royalties. She ranked #7 on AskMen's list of Top 99 Women for 2013.

Stewart will play the muse Delphi in the upcoming The Big Shoe which will be directed by Steven Shainberg.

Stewart currently lives in Los Angeles. Apart from acting, she is also interested in attending college in the near future, saying, "I want to go to college for literature. I want to be a writer. I mean, I love what I do, but it's not all I want to do – be a professional liar for the rest of my life." In a 2008 interview with Vanity Fair, Stewart acknowledged that she was in a relationship with Michael Angarano, her co-star from the 2004 film Speak.

Since meeting on the set of Twilight in 2008, Stewart was romantically linked to co-star Robert Pattinson. For roughly four years, they did not explicitly confirm a relationship, but paparazzi photographs and eyewitness accounts drove intense media and fan speculation and attention. In an interview with GQ, when asked why she was reluctant to talk about the relationship despite photographs of the couple online, Stewart said, "So much of my life is so easily googled. I mean, it's like, come on guys, it's so obvious!" She said in addition,

"I'm selfish. I'm like, 'That's mine!' And I like to keep whatever is mine remaining that way. It's a funny little game to play and it's a slippery slope. I always say to myself I'm never going to give anything away because there's never any point or benefit for me. I guarantee whenever I get married or have a baby, everyone is going to want to know my kid's name and I'm not going to say it for ages."

Stewart officially acknowledged her relationship with Pattinson for the first time in July 2012, when Us Weekly published photos of Stewart having an affair with her Snow White and the Huntsman director, Rupert Sanders. The day the photos were released, Stewart issued a public apology to Pattinson, saying, "This momentary indiscretion has jeopardized the most important thing in my life, the person I love and respect the most, Rob. I love him, I love him, I'm so sorry."