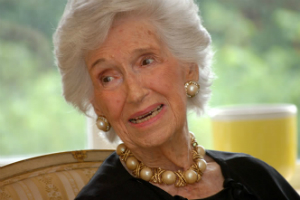 Stevens was born Risë Steenberg, on June 11, 1913, in New York City, the daughter of Sarah "Sadie" (née Mechanic) and Christian Steenberg, an advertising salesman. Her father was of Norwegian Lutheran descent and her mother was Jewish (of Polish and Russian descent). She had a younger brother, Lewis "Bud" Steenberg, who died in World War II. She studied at New York's Juilliard School for three years, and with Anna Eugenie Schoen-René. She went to Vienna, where she was trained by Marie Gutheil-Schoder and Herbert Graf. She made her début as Mignon in Prague in 1936 and stayed there until 1938, also singing in guest appearances at the Vienna State Opera.

She was engaged as a member of the Vienna State Opera ensemble at the Teatro Colón in 1938 (as Octavian) and was invited to the Glyndebourne Festival in 1939 where she was heard as Dorabella and Cherubino. In 1938 she made her début with the Metropolitan Opera in Philadelphia as Mignon. Three days later at the Metropolitan Opera in New York City, she sang Octavian opposite Lotte Lehmann. The film industry in Hollywood produced several films for her, including The Chocolate Soldier (1941) with Nelson Eddy. She played an opera singer in Going My Way (1944) with Bing Crosby, wherein she is credited as a contralto; she is featured performing Bizet's aria "Habanera," "Going My Way" with the Robert Mitchell Boys Choir, and "Ave Maria" with Bing Crosby and the choir.

In 1939, Stevens married Walter Surovy, an Austrian stage and screen actor she met during her European years, after he fled the Nazis to New York. He took over the management of her career and skillfully planned publicity to move her into areas of the business they both felt would advance her career. One likely display of Surovy's finesse with publicity was the fact that Stevens' voice was insured by Lloyd's of London in 1945 for $1 million.

The couple had one child, Nicholas, who followed in his father's footsteps, becoming an actor on Broadway, and in film and television. The marriage lasted for over 61 years, until Walter's death in 2001.

For over two decades (until 1961) Stevens was the Met's leading mezzo-soprano and the only mezzo to command the top billing (and commensurate fees) normally awarded only to star sopranos and tenors. Her most successful roles there included Cherubino (recording on EMI), Octavian, Dalila (two separate discs of excerpts on RCA Victor), Laura, Hansel (complete recording on Columbia) and Marina. Other roles included Fricka in Wagner's The Ring of the Nibelung, Marfa in Mussorgsky's Khovanshchina, Giulietta in The Tales of Hoffmann, and Prince Orlovsky in Die Fledermaus. As a singer grounded in 19th century roles, she had a surprise success as Orfeo in Gluck's Orfeo ed Euridice, under the musical direction of Pierre Monteux, which was immediately recorded for RCA Victor.

Above all, she was especially celebrated for her Carmen. She had an enormous personal triumph at the Metropolitan in the role in the famous Tyrone Guthrie production in 1951, becoming the Carmen of her generation. Her RCA Victor recording of the opera, conducted by Fritz Reiner and co-starring Jan Peerce, Robert Merrill and Licia Albanese, became a best seller and has never been out of print in some format. She also appeared in Paris, London, and at Glyndebourne. At La Scala in Milan, she had a great success in Virgilio Mortari's La Figlia del Diavolo in a version of the Salome story where Herodias is the leading character. Stevens sang, acted and danced the role in a notable tour de force. Her farewell performance at the Metropolitan was as Carmen, in 1961.

A hallmark of Stevens' career was versatility. She sang opera, excelled on radio and television singing from what came to be called The American Songbook (much of which was recorded), proved to be an accomplished film and television actress, and she handled Broadway material (Anna in The King and I, Lisa in Lady in the Dark) with glamour and star quality. She toured the U.S. annually for several decades singing recitals. In 1962, she recorded the voice of Glinda for Journey Back to Oz, but the production ran out of money and was halted for more than four years. It was only after the Filmation studio had made profits on their numerous television series that they were able to finish the project (which was copyrighted 1971, released in 1972 in the United Kingdom and in 1974 in the United States). After her retirement from the opera stage, Stevens served as General Manager of the Metropolitan Opera National Company until 1966 and later coached the new generation of singers at the Met. Stevens made occasional television appearances too, including a guest-starring role on NBC's The Martha Raye Show.

On October 22, 1977, Stevens was awarded the prestigious University of Pennsylvania Glee Club Award of Merit. Established in 1964, this award sought "to bring a declaration of appreciation to an individual each year that has made a significant contribution to the world of music and helped to create a climate in which our talents may find valid expression". She was a Kennedy Center Honoree in 1990.