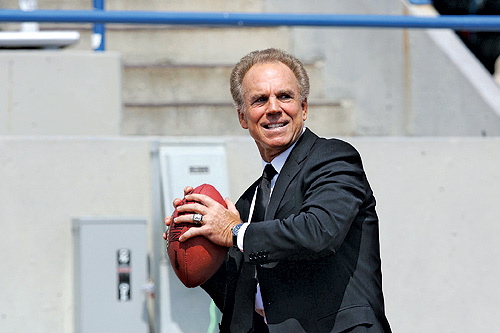 After his required service in the United States Navy, including a tour of duty in Vietnam, Staubach joined the Dallas Cowboys in 1969. He played with the club during five seasons in which they played in the Super Bowl, four as the primary starting quarterback. He led the Cowboys to victories in Super Bowl VI and Super Bowl XII. Staubach was named Most Valuable Player of Super Bowl VI becoming the first of four players to win the Heisman Trophy and Super Bowl MVP—Jim Plunkett, Marcus Allen, and Desmond Howard are the other three. He was named to the Pro Bowl six times during his eleven-year NFL career.

The American sportsman of German descent was born in Cincinnati, Ohio, and grew up in suburban Silverton, Ohio. Roger attended St. John the Evangelist Catholic School, and graduated from a Catholic high school, Purcell High School (now called Purcell Marian High School). After one year at New Mexico Military Institute, Staubach played quarterback for the United States Naval Academy. As a third class midshipman (sophomore), he got his first opportunity to play in the third game of the season, against the University of Minnesota on October 6, 1962. Staubach relieved starter Ron Klemick as the Minnesota defense, led by Bobby Bell and Carl Eller, was stifling in its 21–0 victory. Staubach was 0–2 passing and was sacked twice for a minus 24 yards. A week later, against Cornell, with the offense misfiring, Hall of Fame Coach Wayne Hardin decided to put Staubach into the game to see if he could spark the team's offense. Staubach went on to lead Navy to six touchdown drives, throwing for 99 yards and two touchdowns, while running for 88 yards and another score, as Navy won 41–0. A few weeks later, Staubach started again in the famed Army–Navy game, which featured president John F. Kennedy (himself a former Naval officer), who just 37 days earlier had negotiated the end of the Cuban Missile Crisis, performing the coin toss. Staubach led the team to a 34–14 upset over Army, throwing for two touchdowns and running for another.

In his second class (junior) season of 1963 he won the Heisman Trophy and the Maxwell Award while leading the Midshipmen to a 9–1 record and a final ranking of #2 in the nation. The Midshipmen lost the national championship to #1 Texas in the Cotton Bowl. That year he led Navy to victory in their annual rivalry with Notre Dame. Navy did not beat Notre Dame again until 2007. In his three seasons at Navy, he completed 292 of 463 passes, with only 19 interceptions, and gained a school record 4,253 yards of total offense. Staubach is the last player from a military academy to win the Heisman Trophy.

He was a 10th round future draft pick in the 1964 NFL Draft by the Dallas Cowboys, which allowed the team to draft him one year before his college elegibility was over, although due to his military commitment, he would not begin playing professionally until 1969 as a 27-year-old rookie. He was also drafted by the Kansas City Chiefs in the 16th round (122nd pick overall) of the 1964 American Football League Draft, also with a future selection. After graduating from the Naval Academy, Staubach could have requested an assignment in the States, but he chose to volunteer for a one-year tour of duty in Vietnam where he served as a Supply Corps officer for the Navy at the Chu Lai base/port until 1967. During his junior year at the Naval Academy, Staubach's color-blindness was detected. He was permitted to become the Naval Academy's first graduate to be commissioned directly into the Supply Corps, which did not necessitate being able to tell the difference between red (port) and green (starboard) lights or to discern the color differences in electrical circuitry. He spent the rest of his Naval career in the United States, playing football on various Naval service teams to prepare for his future career in the National Football League.

In 1969, Staubach resigned his commission, just in time to join the Cowboys training camp. The Naval Academy retired Staubach's jersey number (#12) during his graduation ceremony after his senior season. In 1981, Staubach was enshrined in the College Football Hall of Fame. In 2007, Staubach was ranked #9 on ESPN's Top 25 Players In College Football History list. He was also rated number 1 on NFL top 10's quarterback of the 1970s.

In 1971, Craig Morton began the season as the starter, but after a loss to the New Orleans Saints, Staubach assumed the role. However, in a game against the Chicago Bears in the seventh week of that season, coach Tom Landry alternated Staubach and Morton on each play, sending in the quarterbacks with the play call from the sideline. Dallas gained almost 500 yards of offense but committed seven turnovers and that led to a 23–19 loss to a mediocre Bears squad that dropped the Cowboys to 4–3 on the season, two games behind the Washington Redskins in the NFC East race.

Staubach assumed the full-time quarterbacking duties in a week eight victory over the St. Louis Cardinals and led the Cowboys to ten consecutive victories, including their first Super Bowl victory, 24–3 over the Miami Dolphins. He led the Cowboys to their first Super Bowl win and was named MVP of Super Bowl VI on January 16, 1972, completing 12 out of 19 passes for 119 yards and two touchdowns, and rushing for 18 yards. In 1972, he missed most of the season with a separated shoulder, but he relieved Morton in a divisional playoff against the San Francisco 49ers and threw two touchdown passes in the last 90 seconds to win the game 30–28. With that performance, he won back his regular job and did not relinquish it again during his career.

Staubach played with the Cowboys until 1979 under Tom Landry. Staubach was a six-time Pro-Bowler (1971, 1975–1979), and led the Cowboys to another NFL championship win in the 1977 season. He threw for 183 yards and a touchdown, with no interceptions, in Dallas' 27–10 victory in Super Bowl XII over the Denver Broncos. Staubach also led the Cowboys to Super Bowl appearances in Super Bowl X and Super Bowl XIII, where they lost to the Pittsburgh Steelers both times. His offensive teammates included standout receivers "Bullet" Bob Hayes, Lance Alworth, Drew Pearson and Golden Richards, tight ends Mike Ditka, Billy Joe Dupree and Jackie Smith, tackle Rayfield Wright and running backs Robert Newhouse, Calvin Hill and Tony Dorsett. Alworth, Ditka, Dorsett, Hayes, Smith and Wright are in the Hall of Fame.

Overall, he finished his 11 NFL seasons with 1,685 completions for 22,700 yards and 153 touchdowns, with 109 interceptions. He also gained 2,264 rushing yards and scored 21 touchdowns on 410 carries. For regular season games of record he has a superior 75% winning percentage.

Staubach retired from football in March 1980, as the then second highest-rated passer of all time at 83.4 (behind Otto Graham at 86.6), and was voted into the Pro Football Hall of Fame in 1985. In 1999, he was ranked number 29 on The Sporting News list of the 100 Greatest Football Players, the second-ranked Cowboy behind Bob Lilly.

Staubach was one of the most exciting NFL players of the 1970s. Known as "Roger The Dodger" for his scrambling abilities, "Captain America" as quarterback of America's Team, and also as "Captain Comeback" for his fourth quarter game-winning heroics, Staubach had a penchant for leading scoring drives which would lead the Cowboys to improbable victories. He led the Cowboys to 23 game-winning drives (15 comebacks) in the fourth quarter, with 17 of those coming in the final two minutes or in overtime.

Perhaps Staubach's most famous moment was the "Hail Mary pass" in the 1975 playoff game against the Minnesota Vikings. With seconds on the clock and the Cowboys trailing 14–10, Staubach launched a 50-yard bomb to wide receiver Drew Pearson, who caught the pass and strode into the end zone for a 17–14 victory. After the game, Staubach quipped he prayed a "Hail Mary" after throwing the pass. Since then, any last-minute pass play to the end zone in a desperate attempt to score a game-winning touchdown is referred to as a "Hail Mary pass" in reference to Staubach's famous play.

On the occasion of the 30th anniversary of Super Bowl VI in 2002, Staubach, accompanied by former President George H.W. Bush, flipped the coin at Super Bowl XXXVI, played at the Louisiana Superdome, where his only other Super Bowl victory took place.

In 2010, Staubach was named the number one Dallas Cowboy of all time according to a poll conducted by the Dallas Morning News.

Roger has been married since 1965 to his sweetheart from grade school, Marianne. They have a son, four daughters, and 13 grandchildren.

In 1977, he capitalized on his football fame and started a commercial real estate business. He had prepared for this by working in the off-seasons from 1970 until 1977 for Henry S. Miller Company. The Staubach Company has been his primary endeavor since retirement from football, and where he served as its Chairman and Chief Executive Officer until June 20, 2007, when he announced he would step down as CEO of the now multi-billion dollar real estate company he started 30 years earlier.

During the 1970s and early 1980s he was a spokesperson for the men's clothing retailer Anderson Little, appearing in both their print and TV ads.

In the early 1980s, Staubach worked for a short time as a color commentator for CBS Sports' NFL telecasts.

Staubach was named The Walter Camp "Man of the Year" in 1983, and was awarded the Davey O'Brien Legends Award in 2001.

In 1996 the U.S.Navy Memorial Foundation awarded Staubach its Lone Sailor Award for his naval service.

Staubach jointly owned Hall of Fame Racing, a NASCAR Nextel Cup team, with fellow former Cowboy and hall-of-famer Troy Aikman, which began racing for the 2006 season but is now a minority owner.

On January 25, 2007, Staubach was named chairman of the North Texas Super Bowl XLV Bid Committee,[10] whose goal was to have the Dallas-Fort Worth Metroplex host the Super Bowl in 2011. On May 23, 2007 the NFL chose Dallas as the host city of Super Bowl XLV.

On September 25, 2007 a fundraising email was sent out from the Presidential campaign of Senator John McCain (R-AZ) with a letter from Roger Staubach asking recipients to make a contribution before the Federal Election Commission 3rd quarter reporting date of September 30, 2007.

On July 11, 2008, The Staubach Company was sold to Jones Lang LaSalle for $613 million. Staubach and his children's trust will gross over $100 million from the sale by 2013. The sale provided an initial payment of $9.27 per Staubach share with additional payments due over the following five years for a total of approximately $29/share. Staubach took half of his first payment in Jones Lang LaSalle stock which was then trading at approximately $59.50/share.

On December 27, 2011, Staubach wrote the foreword for a book titled The Power in a Link, published by John Wiley & Sons, authored by United States Military Academy graduate, David Gowel.