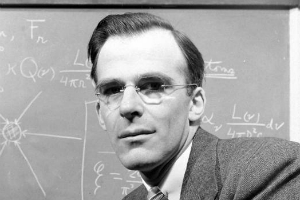 Lyman Strong Spitzer, Jr. (June 26, 1914 – March 31, 1997):339 was an American theoretical physicist, astronomer and mountaineer. As a scientist, he carried out research into star formation, plasma physics, and in 1946, conceived the idea of telescopes operating in outer space. Spitzer invented the stellarator plasma device and is the namesake of NASA's Spitzer Space Telescope. As a mountaineer, he made the first ascent of Mount Thor with David Morton.

Spitzer was born to a Presbyterian family in Toledo, Ohio, the son of Lyman Strong Spitzer and Blanche Carey (née Brumback). Through his paternal grandmother, he was related to inventor Eli Whitney. Spitzer graduated from Scott High School. He then attended Phillips Academy in 1929 and went on to Yale College, where he graduated Phi Beta Kappa in 1935 and was a member of Skull and Bones. During a year of study at Cambridge University, he was influenced by Arthur Eddington and the young Subrahmanyan Chandrasekhar. Returning to the U.S., Spitzer earned his MA from Princeton University in 1937 and his PhD in 1939, under the direction of Henry Norris Russell.

Spitzer's brief time as a faculty member at Yale was interrupted by his wartime work on the development of sonar. In 1947, at the age of 33, he succeeded Russell as director of Princeton University Observatory, an institution that, virtually jointly with his contemporary Martin Schwarzschild, he continued to head until 1979.

Spitzer's research centered on the interstellar medium, to which he brought a deep understanding of plasma physics. In the 1930s and 1940s, he was among the first to recognize star formation as an ongoing contemporary process. His monographs, "Diffuse Matter in Space" (1968) and "Physical Processes in the Interstellar Medium" (1978) consolidated decades of work, and themselves became the standard texts for some decades more.

Spitzer was the founding director of Project Matterhorn, Princeton University's pioneering program in controlled thermonuclear research, renamed in 1961 as Princeton Plasma Physics Laboratory. He was an early proponent of space optical astronomy in general, and in particular of the project that became Hubble Space Telescope.

Spitzer suddenly died on March 31, 1997 after completing a regular day of work at Princeton University. He was survived by wife Doreen Canaday Spitzer, four children, and ten grandchildren. Among Spitzer's four children is neurobiologist Nicholas C. Spitzer, who is currently the professor and vice chair in neurobiology at UC San Diego. He was buried at Princeton Cemetery.