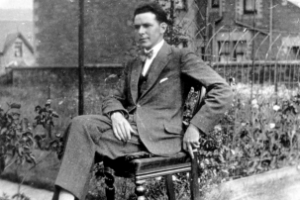 William Soutar (28 April 1898–15 October 1943) was a Scottish poet. He served in the navy in World War I, and afterwards studied at the University of Edinburgh, where he encountered the work of Hugh MacDiarmid. This led to a radical alteration in his work, and he became a leading poet of the Scottish Literary Renaissance and 'one of the greatest poets Scotland has produced'. In 1924, he was diagnosed with ankylosing spondylitis. From 1930 he was bedridden. He died of tuberculosis in 1943. His journal, Diary of a Dying Man, was published posthumously and is considered to 'put him into the rank of the great diarists'

One form of verse which he used was the cinquain (now known as American cinquain), these he labelled epigrams. He took up this form in the second half of the 1930s with such enthusiasm that he became an even more prolific practitioner than Adelaide Crapsey had been.

Seeds in the Wind, Poems in Scots for Children Andrew Dakers, London 1943