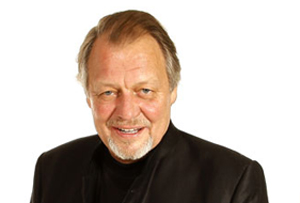 David Soul is an American actor and singer, best known for his role as Detective Kenneth "Hutch" Hutchinson in the television programme Starsky and Hutch (1975–1979). He became a British citizen in 2004.

Soul was born at Chicago, Illinois, United States, on August 28, 1943 as David Richard Solberg. His mother was a teacher and his father, Dr. Richard Solberg, was a Lutheran minister, Professor of History and Political Science and Director of Higher Education for the American Lutheran Church. Dr Solberg was also Senior Representative for Lutheran World Relief during the reconstruction of Germany after the Second World War from 1949 until 1956. Because of this, the family moved frequently while Soul was growing up.

Soul attended Augustana College, University of the Americas in Mexico City and the University of Minnesota. At 19, he turned down a professional baseball contract with the Chicago White Sox in order to study political science. While in Mexico, inspired by students who taught him to play the guitar, Soul changed his direction and decided to follow his passion for music. His first appearance upon returning from Mexico to the States was in a club in Minneapolis, The 10 O'Clock Scholar.

Soul first gained attention as the "Covered Man" appearing on The Merv Griffin Show in 1966 and 1967, on which he sang while wearing a mask. He explained: "My name is David Soul, and I want to be known for my music." The same year, he made his television debut in Flipper.

In 1967, he signed a contract with Columbia Pictures and following a number of guest appearances, including the episode "The Apple" from the second season of Star Trek, he landed the role of Joshua Bolt on the television program Here Come the Brides with co-stars Robert Brown, Bobby Sherman and Bridget Hanley. The series was telecast on the ABC network from September 25, 1968 to September 18, 1970. In 1972 he co-starred as Arthur Hill's law partner on Owen Marshall: Counselor at Law. Following numerous episodic guest starring television roles including Streets of San Francisco, he was cast by Clint Eastwood in the film Magnum Force.

His breakthrough came when he portrayed Detective Ken "Hutch" Hutchinson on Starsky and Hutch, a role he played from 1975 until 1979. Soul also directed three episodes of Starsky and Hutch: "Huggy Can't Go Home" (1979), "Manchild on the Streets" (1977), and "Survival" (1977). Throughout his career, he has also made guest appearances on shows such as Star Trek, I Dream of Jeannie, McMillan & Wife, Cannon, Gunsmoke, All in the Family, and numerous TV movies and mini-series including Homeward Bound (1980), World War III and Rage (1980) a TV movie commended on the floor of the US Senate and for which he received an Emmy Award nomination. Soul also starred with James Mason in the 1979 TV miniseries adaptation of Stephen King's Salem's Lot, which was also edited and released as a theatrical feature film in some countries.

In the United States, he continued to make guest appearances in various television series. He starred in the short-lived, 1983 NBC series Casablanca, playing nightclub owner Rick Blaine (the part made famous by Humphrey Bogart in the 1942 film Casablanca), and co-starred in the NBC series The Yellow Rose during the 1983-1984 season. He also starred in the television adaptation of Ken Follett's wartime drama The Key to Rebecca (1985) directed by David Hemmings. He later starred as the infamous Florida robber Michael Platt alongside actor Michael Gross, from the television series Family Ties, in the TV film In the Line of Duty: The FBI Murders (1988), which depicted the 1986 FBI Miami shootout and which was subsequently used as an FBI training film. Soul also directed the episode "No Exit" of the 1980s TV series Miami Vice.' In 1987 Soul was cast as Major Oldham in the movie "The Hanoi Hilton".

In the mid-1990s, Soul moved to London, forging a new career on the West End stage including the role of Chandler Tate in Comic Potential. He also participated in the successful 1997 election campaign of Martin Bell who ran as an MP for Tatton, as well as Bell's unsuccessful campaign in Brentwood in Essex in the 2001 General Election.

In 2003, Soul appeared (as himself) in the first series of the BBC's Little Britain. In 2004, he appeared in Agatha Christie's Poirot - Death on the Nile in the role of Andrew Pennington (he had also starred in the 1989 film adaptation of Christie's Appointment with Death). He had a brief cameo in the 2004 film version of Starsky & Hutch, alongside original co-star Paul Michael Glaser.

On 12 July 2004, he took over playing the role of Jerry Springer in Jerry Springer - The Opera at the Cambridge Theatre in London, which was televised by the BBC in 2005. He returned to the West End in 2006, playing Mack in a new production of Jerry Herman's musical Mack and Mabel at the Criterion Theatre. The production co-starred Janie Dee and was directed by John Doyle.

He also appeared in the TV series Dalziel & Pascoe (Game of Soldiers) in 2004 and was a guest on the BBC's Top Gear. Soul proved to be one of the fastest drivers to have appeared on the show, but managed to break the car's gearbox (and subsequently that of the backup car) very close to the finish.

He appeared with Fred Ward and Willem Dafoe in the film Farewell directed by Christian Carion which received its US release in 2010.

In 2012, David Soul was featured in the hit album by "Fosseytango" singing on the track "Landlord" (featuring Jimmy Page, on guitar).

On 29 July 2012, Soul appeared in an episode of the British detective drama series Lewis, playing a murder victim.

In 2013, Soul appeared in a brief role in the film of Irving Welsh's novel Filth.

Soul has been married five times and has five sons and a daughter. He married firstly, the actress Mirriam "Mim" Solberg (née Russeth), in 1964. The couple had one child together, but the marriage only lasted a year.

Soul then married actress Karen Carlson in 1968, after they had met on the set of the television series Here Comes The Brides. The couple also had a child together, and divorced in 1977.

During the years he was filming Starsky & Hutch, Soul had an open relationship with actress Lynne Marta.

Soul's third wife was Patti Carmel Sherman (the ex-wife of fellow Here Come the Brides co-star and teen pop idol Bobby Sherman), whom he married in 1980. They had three children together, but the marriage disintegrated due to Soul's alcoholism and violent temper. Soul had been an alcoholic for several years, a problem that had affected both of his previous marriages. During his marriage to Sherman, Soul was arrested and jailed for assaulting her while she was seven months' pregnant. After being released, he was ordered to attend a two-year therapy program to deal with his drinking and anger. The couple divorced in 1986.

Soul married again in 1987, to actress Julia Nickson. The couple had one child, China Soul, who is a singer/songwriter. Soul and Nickson divorced in 1993.

Soul emigrated to London in the mid-1990s with his girlfriend, American actress Alexa Hamilton, though the couple later broke up.

In September 2004, Soul became a British citizen, but retained his US citizenship. He is an avid fan of English football and is an Arsenal F.C. supporter.

Soul married his fifth wife, Helen Snell, in June 2010. They had been in a relationship since 2002, after meeting when Soul was working on the UK stage production of Deathtrap.