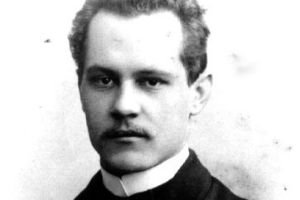 German physicist whose atomic model permitted the explanation of fine-structure spectral lines. Born in Prussia which is now part of Russia.

As professor of theoretical physics at Munich (1906–31), he did his most important work. His investigations of atomic spectra led him to suggest that, in the Bohr model of the atom, the electrons move in elliptical orbits as well as circular ones. From this idea he postulated the azimuthal quantum number. He later introduced the magnetic quantum number as well. Sommerfeld also did detailed work on wave mechanics, and his theory of electrons in metals proved valuable in the study of thermoelectricity and metallic conduction.

Sommerfeld also educated and groomed a large number of students for the new era of theoretical physics. Though Sommerfeld was nominated for the Nobel Prize 81 times, more than any other physicist, he never received the award..

Sommerfeld's style as a professor and institute director did not put distance between him and his colleagues and students. He invited collaboration from them, and their ideas often influenced his own views in physics. He entertained them in his home and met with them in cafes before and after seminars and colloquia.

Sommerfeld died 26 April 1951 in Munich from injuries after a traffic accident.