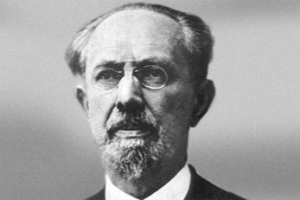 Werner Sombart (19 January 1863 – 18 May 1941) was a German economist and sociologist, the head of the “Youngest Historical School” and one of the leading Continental European social scientists during the first quarter of the 20th century.

He was born in Ermsleben, Harz, as the son of a wealthy liberal politician, industrialist, and estate-owner, Anton Ludwig Sombart, and studied at the universities of Pisa, Berlin, and Rome, both law and economics. In 1888, he received his Ph.D. from Berlin under the direction of Gustav von Schmoller and Adolph Wagner, then the most eminent German economists. One of his daughters, Clara was married to Hans Gerhard Creutzfeldt, who first described the Creutzfeldt-Jakob disease.

As an economist and especially as a social activist, Sombart was then seen as radically left-wing, and so only received—after some practical work as head lawyer of the Bremen Chamber of Commerce—a junior professorship at the out-of-the-way University of Breslau. Although faculties at such eminent universities as Heidelberg and Freiburg called him to chairs, the respective governments always vetoed this. Sombart, at that time, was an important Marxian, someone who used and interpreted Karl Marx—to the point that Friedrich Engels called him the only German professor who understood Das Kapital. Sombart called himself a "convinced Marxist," but later wrote that "It had to be admitted in the end that Marx had made mistakes on many points of importance."

Sombart was not the first sociologist to devote a whole book to the concept of social movement in his 1896 published Sozialismus und soziale Bewegung. His understanding of social movements is inspired by a book on social movements by Lorenz von Stein and Marx. For him, the rising worker’s movement was a result of the inherent contradictions of capitalism. The proletarian situation created a “love for the mass”, which together with the tendency “to a communistic way of life” in social production were the prime features of the social movement.

In 1902, his magnum opus, Der moderne Kapitalismus (Historisch-systematische Darstellung des gesamteuropäischen Wirtschaftslebens von seinen Anfängen bis zur Gegenwart), appeared in two volumes (he expanded the work in 1916, and added a third volume in 1927; all three volumes were then split into semi-volumes for a total of six books). It is a systematic history of economics and economic development through the centuries and very much a work of the Historical School. The first book deals with the transition from feudal society to capitalism, and the last book treats conditions in the 20th century. The development of capitalism is divided into three stages:

Although later much disparaged by neo-classical economists, and much criticized in specific points, Der moderne Kapitalismus is still today a standard work with important ramifications for, e.g., the Annales school (Fernand Braudel).

In 1906, Sombart accepted a call to a full professorship at the Berlin School of Commerce, an inferior institution to Breslau but closer to political “action” than Breslau. Here, inter alia, companion volumes to Modern Capitalism dealing with luxury, fashion, and war as economic paradigms appeared; especially the former two are the key works on the subject until today. In 1906 his Why is there no Socialism in the United States? also appeared. The book is a famous work on American exceptionalism in this respect to this day.

Sombart's 1911 book, Die Juden und das Wirtschaftsleben (The Jews and Modern Capitalism), is an addition to Max Weber's historic study of the connection between Protestantism (especially Calvinism) and Capitalism, with Sombart documenting Jewish involvement in historic capitalist development. He argued that Jewish traders and manufacturers, excluded from the guilds, developed a distinctive antipathy to the fundamentals of medieval commerce. These were primitive and unprogressive: the desire for 'just' (and fixed) wages and prices, for an equitable system in which shares of the market were agreed and unchanging, profits and livelihoods modest but guaranteed, and limits placed on production. Excluded from the system, Sombart argued, the Jews broke it up and replaced it with modern capitalism, in which competition was unlimited and pleasing the customer was the only law. Paul Johnson, who considers the work "a remarkable book", notes that Sombart left out some inconvenient truths, and ignored the powerful mystical elements of Judaism. He refused to recognize, as Weber did, that wherever these religious systems, including Judaism, were at their most powerful and authoritarian, commerce did not flourish. Jewish businessmen, like Calvinist ones, tended to operate most successfully when they had left their traditional religious environment and moved on to fresher pastures.

In his somewhat eclectic 1913 book Der Bourgeois (translated as The quintessence of capitalism), Sombart endeavoured to provide a psychological and sociological portrait of the modern businessman, and to explain the origins of the capitalist spirit. The book begins with "the greed for gold", the roots of private enterprise and the types of entrepreneurs. Subsequent chapters discuss "the middle class outlook" and various factors shaping the capitalist spirit - national psychology, racial factors, biological factors, religion, migrations, technology and last but not least "the influence of capitalism itself."

In a work published in 1915, a "war book" with the title Händler und Helden Sombart welcomed the "German War" as the "inevitable conflict between the English commercial civilisation and the heroic culture of Germany". In this book, according to Friedrich Hayek, Sombart revealed an unlimited contempt for the "commercial views of the English people" who had lost all warlike instincts. Sombart also showed contempt for "the universal striving for the happiness of the individual". To Sombart (in this work) the highest ideal is the "German idea of the State, as formulated by Fichte, Lassalle and Rodbertus is that the state is neither founded nor formed by individuals, nor an aggregate of individuals, nor is its purpose to serve any interests of individuals. It is a Volksgemeinschaft in which the individual has no rights but only duties. Claims of the individual are always an outcome of the commercial spirit. The "ideas of 1789" – Liberty Equality and Fraternity – are characteristically commercial ideals which have no other purpose but to secure certain advantages to individuals." In his work Sombart claims that the war had helped the Germans to rediscover their "glorious heroic past as a warrior people"; and that all economic activities are subordinated to military ends. Sombart also wrote that to regard war as inhuman and senseless is a product of commercial views. There is a life higher than the individual life, the life of the people and the life of the state, and it is the purpose of the individual to sacrifice himself for that higher life. War against England was therefore also a war against the opposite ideal – the "commercial ideal of individual freedom".

Finally, in 1917, Sombart became professor at the Friedrich-Wilhelms-Universität, then the pre-eminent university in Europe if not in the world[citation needed], succeeding his mentor Adolph Wagner. He remained on the chair until 1931 but continued teaching until 1940. During that period he was also one of the most renowned sociologists alive, more prominent a contemporary than even his friend Max Weber. Sombart's insistence on Sociology as a part of the Humanities (Geisteswissenschaften), necessarily so because it dealt with human beings and therefore required inside, empathic "Verstehen" rather than the outside, objectivizing "Begreifen" (both German words translate as "understanding" into English), became extremely unpopular already during his lifetime, because it was the opposite of the "scientification" of the social sciences, in the tradition of Auguste Comte, Émile Durkheim and Weber (although this is a misunderstanding; Weber largely shared Sombart's views in these matters), which became fashionable during this time and has more or less remained so until today. However, because Sombart's approach has much in common with Hans-Georg Gadamer's Hermeneutics, which likewise is a Verstehen-based approach to understanding the world, he is coming back in some sociological and even philosophical circles that are sympathetic to that approach and critical towards the scientification of the world. Sombart's key sociological essays are collected in his posthumous 1956 work, Noo-Soziologie.

During the Weimar Republic, Sombart moved toward nationalism, and his relation to Nazism is still debated today.

In 1934 he published Deutscher Sozialismus where he claimed a "new spirit" was beginning to "rule mankind". The age of capitalism and proletarian socialism was over, with "German socialism" (National-Socialism) taking over. This German socialism puts the "welfare of the whole above the welfare of the individual". German socialism must effect a "total ordering of life" with a "planned economy in accordance with state regulations". The new legal system will confer on individuals "no rights but only duties" and that "the state should never evaluate individual persons as such, but only the group which represents these persons". German socialism is accompanied by the Volksgeist (national spirit) which is not racial in the biological sense but metaphysical: "the German spirit in a Negro is quite as much within the realm of possibility as the Negro spirit in a German". The antithesis of the German spirit is the Jewish spirit, which is not a matter of being born Jewish or believing in Judaism but is a capitalistic spirit. The English people possess the Jewish spirit and the "chief task" of the German people and National Socialism is to destroy the Jewish spirit.

However, his 1938 anthropology book, Vom Menschen, is clearly anti-Nazi, and was indeed hindered in publication and distribution by the Nazis. In his attitude towards the Nazis, he is often likened to Martin Heidegger as well as his younger friend and colleague Carl Schmitt, but it is clear that, while the latter two tried to be the vanguard thinkers for the Third Reich in their field and only became critical when they were too individualistic and elbowed out from their power positions, Sombart was always much more ambivalent. Sombart had many, indeed more than the typical proportion, of Jewish students, most of whom felt moderately positive about him after the war, although he clearly was no hero nor resistance fighter.

Sombart's legacy today is difficult to ascertain, because the alleged National Socialist affiliations have made an objective reevaluation difficult (while his earlier Socialist ones harmed him with the more bourgeois circles), especially in Germany. As has been stated, in economic history, his "Modern Capitalism" is regarded as a milestone and inspiration, although many details have been questioned. Key insights from his economic work concern the - recently again validated - discovery of the emergence of double-entry accounting as a key precondition for Capitalism and the interdisciplinary study of the City in the sense of urban studies. Like Weber, Sombart makes double-entry bookkeeping an important component of modern capitalism. He wrote in "Medieval and Modern Commercial Enterprise" that "The very concept of capital is derived from this way of looking at things; one can say that capital, as a category, did not exist before double-entry bookkeeping. Capital can be defined as that amount of wealth which is used in making profits and which enters into the accounts." He also coined the term and concept of creative destruction which is a key ingredient of Joseph Schumpeter's theory of innovation (Schumpeter actually borrowed much from Sombart, not always with proper reference). In Sociology, mainstream proponents still regard Sombart as a 'minor figure' and his sociological theory an oddity; today it is more philosophical sociologists and culturologists who, together with heterodox economists, use his work. Sombart has always been very popular in Japan.

One of the reasons of a lack of reception in the United States is that most of his works were for a long time not translated into English - in spite of, and excluding, as far as the reception is concerned, the classic study on Why there is no Socialism in America.

However, in recent years sociologists have shown renewed interest in Sombart's work.