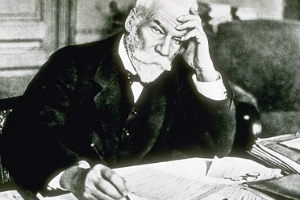 Belgian chemist, industrialist, philanthropist and Minister of State. An autodidact,in 1861 Solvay developed the ammonia-soda process. The process was an improvement over the earlier Leblanc process.

He founded the company Solvay & Cie and established his first factory at Couillet (now merged into Charleroi, Belgium) in 1863 and further perfected the process until 1872, when he patented it. Soon, Solvay process plants were established in the United Kingdom, the United States, Germany and Austria. Today, about 70 Solvay process plants are still operational worldwide.

The exploitation of his patents brought Solvay considerable wealth, which he used for philanthropic purposes, including the establishment in 1894 of the "Institut des Sciences Sociales" (ISS) or Institute for Sociology at the Free University of Brussels.

In 1903, he founded the Solvay Business School which is also part of the Free University of Brussels. In 1911, he began a series of important conferences in physics, known as the Solvay Conferences, whose participants included luminaries such as Max Planck, Ernest Rutherford, Maria Skłodowska-Curie, Henri Poincaré, and (then only 32 years old) Albert Einstein. A later conference would include Niels Bohr, Werner Heisenberg, Max Born, and Erwin Schrödinger.

He was two times elected to the Belgian Senate for the Liberal Party and appointed Minister of State at the end of his life.

Apart from all the schools, building and streets there is also the Asteroid Solvay (7537)that is named after him, and for his financial support to the polar expedition of Adrien de Gerlache the latter named a mountain in the Palmer-Archipel after Solvay.