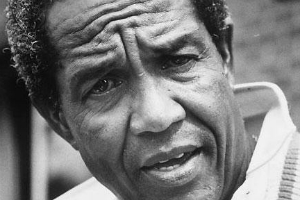 West Indies sports figure, a cricketing legend known as the greatest all-rounder of all time. Sobers’ feats with bat, ball or in the field are remarkable, making the West Indies the most feared cricketing nation in the world for a successful 20-year run. The legendary batsman published his autobiography in 2002, telling of his upbringing and the tragic accident that inspired him throughout his career. When friend and fellow player, Collie Smith, was killed in a car accident, Sir Garry explained how he felt that, "I had to play for two because he could have been one of the greatest. I realized that the West Indies had lost a great player and I had to substitute," he added.

Garry was the fifth of six children, born with an extra finger on each hand (removed at birth). He excelled at most athletic activities, playing golf, soccer and basketball for Barbados, making his first class debut at the age of 16, appearing in tests a year later. By the time he retired from cricket he had scored 8,032 runs and taken 235 wickets and 109 catches in 93 Tests. His exceptional Test batting average tells little about the manner in which he made the runs, his elegant yet powerful style marked by all the shots, but memorably his off-side play. As a batsman he was great, as a bowler, merely superb, but would have made the West Indies side as a bowler alone. He was remarkably versatile with the ball, bowling two styles of spin

- left arm orthodox and wrist spin, but was also a fine fast-medium opening bowler. His catching close to the wicket may have been equaled but never surpassed, and he was a brilliant fielder anywhere. He was an enterprising captain, at times maybe too enterprising, as when a generous declaration allowed England to win a decisive match at Port-of-Spain. Outspoken and a hard worker, he was knighted for his services to the game in 1975. Garry was among the first personalities trying to integrate apartheid countries through sport by coaching black youths and playing in racist Rhodesia (now Zimbabwe) in 1969, in spite of severe criticism.