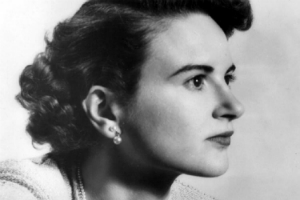 Ruth was born in Sacramento, California. Her father, Joseph Slenczynski was a violinist. Pushed by her father and starting at age three, Slenczynska was forced to practice the piano relentlessly. When she was four, she began her piano studies in Europe, later studying with Artur Schnabel, Egon Petri, Alfred Cortot, Josef Hofmann, and Sergei Rachmaninoff.

She played her debut in Berlin at age six and made her debut in Paris with a full orchestra at just 11 years of age. She became extremely popular in Europe; however, the strain of endless practice and the touring schedule imposed upon her by her father caused her great emotional stress and by the age of fifteen she withdrew from performing.

Slenczynska was accepted to the University of California, Berkeley and while there, she met fellow student George Born. The two married after a short engagement in 1944, but were divorced ten years later. Slenczynska resumed her concert career establishing herself as a well-known pianist. In 1964 she accepted a full time position at Southern Illinois University Edwardsville as Artist-in-Residence, a title she retained until 1987. A large assortment of her memorabilia and recordings constitutes a Special Collection in the Lovejoy Library as SIUe.

She married again in 1967, this time to a fellow faculty member and professor of political science at Southern Illinois.

In 1957 she published a book of memoirs, Forbidden Childhood, which deals with life as a child prodigy, and a book on piano technique, Music at Your Fingertips: Aspects of Pianoforte Technique.

In recent years Ruth Slenczynska's career has been resurgent in Japan, where she currently records and performs.